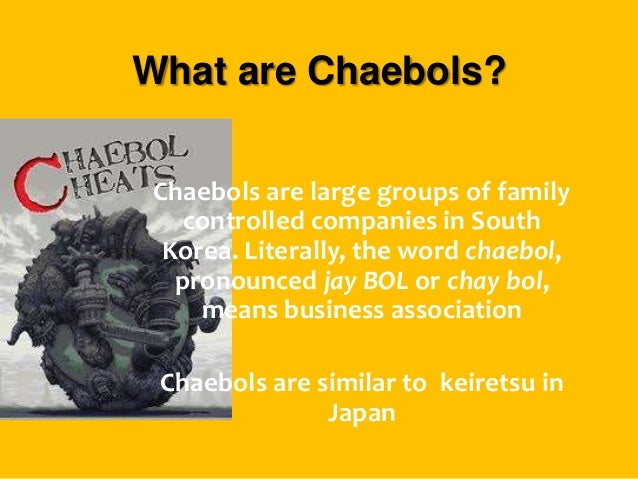 A chaebol is a South Korean business conglomerate. They typically consist of global multinational companies which are controlled by a chairman, who has power over the operations and relationships among the companies. The term chaebol is often used to mean highly integrated business conglomerates, but it has deeper roots: a vast woven net that involves sourcing of raw materials, production, pricing, finance, distribution and politics. The word was first used in English in 1984. Companies like Hyundai, Samsung, Hanwha,  Doosan, and LG are examples of Korean family-controlled corporate groups which could be characterized as chaebols.

The Japanese have similar conglomerates, which are known as keiretsu.

What are examples of chaebols again?

The word chaebol comes from the combination of two Korean characters: one for “rich” and the other for “clan.” Samsung is only one of a handful of family-controlled chaebols that dominate economic life in South Korea. Some, like Samsung, are well known outside their home country, but domestically, they all wield immense power — and are coming under intense scrutiny around the world. Another example is LG which makes smartphones, televisions, electronic components, chemicals and fertilizer. LG, which was formerly known as Lucky Gold, also owns Korean baseball and basketball teams. Hyundai, which makes the Hyundai and Kia cars that are popular in the US and other countries, designs elevators, provides logistics services, and runs hotels and department stores.

How did chaebols come to power?

Chaebols were like a phoenix which rose from the ashes of the Korean Conflict. After the battles ended, and the truce drew the line, South Korean officials steered relief funds and cheap loans to businessmen who promised to rebuild the country. The government also protected homegrown industries from foreign competition to help them develop. The recipe proved to be potent: chaebols played a major role in South Korea’s rise as an industrial giant in the following decades.

But the recipe that cooked up the chaebols also created severe financial indigestion. imbalances. A number of economists have argued that the funds that were originally intended to help the ordinary citizens, went instead to wealthy families, thereby creating  resentment that has lingered for decades. South Korean government protection of the chaebols and crackdowns on any grassroots labor movements have allowed these families to expand their business empires into new areas. These protected chaebols have little to no fear of recriminations internally or externally. The barriers to entry in most enterprises, including the costs, have created large moats around these businesses, which stifles competition.

As a result, chaebol have become sprawling business enterprises that hold a nearly two-thirds market share in South Korea. Manufacturing businesses held an even higher share by the end of the 1990’s (according to the World Trade Organization).  But there is a deep-seated belief among many South Koreans that their immense wealth was accumulated at the expense of the public. To those people, recurring chaebol scandals are particularly upsetting

How did they get political power?

Take the example of Park Chung-hee, a general and the father of the current president, who took power in South Korea after a 1961 coup. He led an effort to rev up the South Korean economy — and he used many of the companies that became chaebol to do it. His government steered money to companies that chased his economic goals, such as emphasizing exports.

The dynamic shifted somewhat as South Korea transitioned to a democracy in the 1980s. By then, the chaebol had become so economically powerful that they held considerable political sway. Politicians began to rely on the companies’ political and financial support to get elected.

Are chaebols under threat?

According to CNET and other news outlets, they are under threat. But time will tell whether it will result in change.

In South Korea, it’s all in the family.

South Korean officials recently arrested Lee Jae-yong, the vice-chair of  Samsung and the scion of an immensely wealthy Lee family. Known as Jay Y. Lee to people in the West, Mr. Lee was accused of paying bribes to a confidante of South Korea’s embattled president. Samsung has defended Mr. Lee. Samsung said that it would work to ensure “that the truth is revealed.”

Mr. Lee has been widely considered Samsung’s de facto leader since his father, Lee Kun-hee, Samsung’s 75-year-old chairman, had a heart attack in 2014. That put the younger Mr. Lee at the helm of a sprawling business empire that encompasses mobile phones, gadgets, appliances, engineering, construction, shipbuilding, insurance and credit cards. Samsung is a gigantic global company, which, all by itself, accounts for one-fifth of South Korea’s exports and one-fifth of the KOSPI, the Korean Stock Exchange.

Public support of chaebol has gradually waned. The Asian financial crisis of the late 1990s stirred worries that the cozy relationship between chaebol member companies could lead to severe damage across multiple businesses if one failed. As the economy has matured and created a nation of consumers, an increasing number of South Koreans worry about the political power and corruption of the chaebol, with many now saying white-collar crime is a major issue.

Despite those concerns, chaebol executives are widely believed to be treated with kid gloves. The elder Mr. Lee, Samsung’s chairman, has been pardoned twice after being convicted of white-collar crimes, with the potential impact to South Korea’s economy given as the reason.