Jeremiah Dixon was said to have been born in a coal mine, according to the Dictionary of National Biography. How his mother, Mary Hunter, came to this curious birthing place is a mystery, but the story of his dark beginnings has held fast since 1733, so that’s for 287 years. Other than his relationship with the famous surveyor, astronomer and scientist, Charles Mason, little is known about dark-haired Dixon. We know he was a surveyor in England and came to the American Colonies in the 1760’s.[1]

Bill Bryson, in his book *A Short History of Nearly Everything, says that there are few images or likenesses of Dixon, and few references to his work in the history books. Yet he contributed to one of the 18th centuries most important measurements: the accurate distance of a degree of meridian. The successful measurement of the meridian was one of the missing links in the measurement of the globe and its place in the universe.

Jeremiah Dixon was also the second half of the most famous English duo of surveyors who were summoned to help draw the boundary lines of early America. Their work, known as the Mason-Dixon Line, was judged by the colonies to be the true line separating Maryland from Pennsylvania, West Virginia and Delaware. That line took years to draw and was used to settle a boundary dispute between two spoiled aristocrats: William Penn’s son and Frederick Calvert, the 6th Baron of Baltimore.[2]

William Penn had been granted land “north of the Potomac River” by King Charles II in 1681. The boundary line was supposed to lie on the 40th Parallel and cross to New Castle, Delaware. The line, however, did not seem to follow the correct points as measured on the ground. Royal efforts to fix the problem in 1682 only bollixed them up more and the boundary line issues festered for a few generations. The family squabbles became violent in the 1730’s when land holders and family relatives took to maintaining the property lines and ownership rights themselves. The resulting violence and armed conflict became known as “Cresap’s War,” which had to be settled by King George II who dispatched military forces to contain the settlers.[3]

King George ordered that the line between the properties be settled once and for all. As a result two surveyors were dispatched with all tools necessary to draw the lines. Mason and Dixon were picked for the task and they brought their theodolites, scopes, tripods, and tapes for the work.

The Mason/Dixon partnership lasted for four years, while they surveyed the disputed lands stretching from the Chesapeake Bay to the Appalachian Mountains. In the process all land owners, the Calvert’s from Maryland and Penn’s from Pennsylvania, got severe haircuts to their prior imagined boundaries. 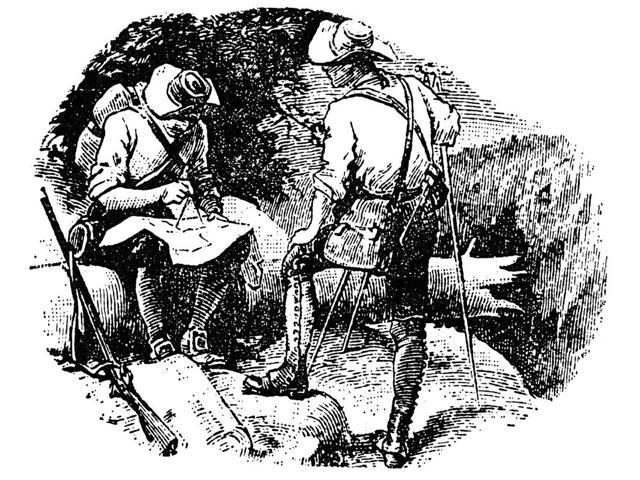 Mason and Dixon laying out the boundary line, by D. H. Montgomery

The state commissioners from Maryland, Pennsylvania, Virginia and Delaware continuously argued, bartered and debated the actual boundaries until the 1770’s, when they sought final resolution to the state lines. In the end, a compromise was reached: the Mason–Dixon line would be extended west to a point five degrees west of the Delaware River. To compensate Pennsylvania for the claimed territory lost, its western boundary would be run due north rather than copying the course of the Delaware River.[4] 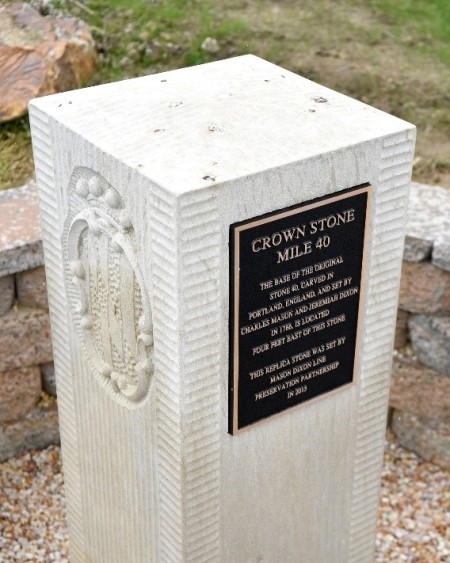 The actual line is visible today with the crown-stone markers that are found along the surveyed boundary.[5]

The real significance of the Mason-Dixon Line came nearly a century later, when in the 1860’s the Mason-Dixon Line became the dividing line between the southern slave states and the northern free states. The fierce loyalty to their rights as landowners from both sides of the line spilled blood during the Civil War.

Many of the slaves in the southern states advanced under cover of darkness, along “the underground railroad.” Homes owned by northern sympathizers ushered African slaves through the Carolinas, Virginia and Maryland and across that boundary line to freedom in Pennsylvania, Delaware and states north of the line.

Missouri was also a border state with neutrality leanings. The Mason-Dixon Line seemed to stretch from Delaware to Kansas, separating the industrialized north and the agrarian south. One of the reasons why the Missouri Compromise was enacted (slaves were permitted in Missouri and none in Maine) was because of the Congressional turmoil along the border states in 1820. It took the neutral states to take a stand worth fighting for.

Arguments flaired along the Mason-Dixon line with Maryland, which was often marked with stripes or thatched coloring, denoting neutrality, as a “boundary state” in the Free/Slave map divide. Maryland may have started the Civil War in neutrality, but it agreed to join the Union in 1864, when the fighting between North and South was hitting its climax. The fervor did not end with the war; some say it is still simmering today.

Take, for example, issues of 2017: the Confederacy (Dixie) and Union (Carpet Baggers) are still polarized geographies. On either side of the line, parties have their own flags and look back to the years before the Civil War for points of reference. Who were the winners and losers? And what happened in Charlottesville, VA, in August of 2017. White nationalists with pro-Nazi views marched and protested. Did they have the right to do so? What about the resulting violence? Why was blood shed once again?

And the treatment of our own citizens today, like Baltimorean, Freddie Gray, tells very different stories, depending on your racial perspective. The real issues of racism cannot be easily drawn with a line. Today we have more African Americans in prison than at any time in our history.

These matters and many others will take generations to resolve.

Examining the “color lines” that we draw in our own cities and neighborhood is a good place to start. Here are some questions that might be worthy of social dialogue and decision-making:

[5] A “crown-stone” boundary monument is a mile marker on the Mason–Dixon line. These markers were originally placed at every 5 miles (8.0 km) along the line. They were ornamented with family coats of arms facing the state that they represented: the coat of arms of Maryland’s Calvert family on one side and the Penn family on the other. Some stones simply have the letters M or P or D designating the state (Maryland or Pennsylvania or Delaware), which the crown stone faces.