The Snow Maiden or Snow Goddess, referred in the Hopi tradition as “Nuvak’chin Mana,” has many themes in her history. As the father of three strong maidens and a smart wife, there is always room in my life for powerful women to guide and show the way. The Snow Maiden represents spirits (ghosts), blessings, weather and winter. Her symbols are ice-cold items, white images and winter moisture. In the Hopi traditional ceremonies, Nuvak’chin Mana is the kachina who appears to pray for the return of cold weather, so the moisture in the earth gets replenished during winter to be reborn in the new year. She comes as a ghost to replenish the wells of our lagging spirits and to cool overheated tempers that may have erupted with the spiking temperatures of summer. [1]

Nuvak’chin Mana is part of the Niman ceremony, which closes the Kachina season after the summer solstice. She is meant to be dressed in white. Her snow white hair is done up in small knots on either side of her head and in the ceremony her face is painted with black eyes and nose, and she has small black dots painted above the eyes. On either side of her cheeks she carries black warrior marks in place of a mouth. She has a red and green trimmed shawl that covers her shoulders in white. She has turquoise and coral jewelry on her wrists and sometimes beads around her neck.

In the Niman ceremony she brings gifts to the attendees and offers prayers for snow for the coming year. She has feathers and green juniper fronds on her head and in her hands. She wears a layered skirt and has white buckskin around her moccasins and up her legs to the skirt edge. [2]

Kachinas are Hopi spirits that help the tribe in all matters of life. Each year the Kachinas emerge around February to remind people of their blessings and to teach children and adults alike the sacred rituals that bring all-important rain. 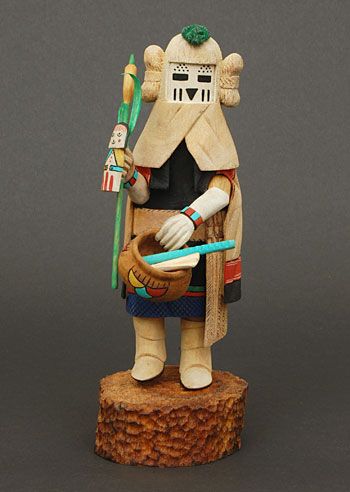 The Hopi tribal members are encouraged to drink a glass of milk on ice at breakfast, lunch and dinner (or at times between) to refresh their energy. It helps bring coolheadedness to their whole day. It’s very refreshing and the appearance of the beverage honors the Goddess, Nuvak’chin Mana. Tribal members, who live on the traditional three mesa’s of the Hopi reservation, pour out a little milk and ice on the ground during particularly dry spells, as an offering to the Snow Maiden. The ritual is meant to carry the need for rain to the nature spirits for replenishment. [3]

Always coming from a point of gratitude, the Hopi take a moment at some point during the day to thank the Powers for all your blessings. Their sentiment is that “A grateful heart is one ready to give and receive more of the Goddess!”

There are hundreds of different Kachinas in the Hopi and western pueblo cultures. The carving of Kachinas has also been identified in the Zuni, Tewa, Acoma, and Laguna Pueblos, and the traditions have spread to some of the eastern pueblos as well. In those varying cultures and traditions Kachina can represent anything that exists in the natural world on earth or in the cosmos.

The figurines can represent an ancestor or an element in nature (land, air, fire, water or spirit). They can represent a place, a human quality, a natural phenomenon (drought, flood, tornado) or even an idea. There have been Kachinas that stand-in for the sun, stars, thunderstorms, wind, plants, bugs and many other items. In many communities the Kachinas have humanistic relationships with each other. [3]