There are several versions of the family crest that are shown on various websites, however, the one that our family has adopted is a curious one: it bears the images of three hoops and three wild boar. Others with lions and stars and helmets are often displayed, but the Hoopers we know chose the one above. The three main symbols (devices) in the Hooper blazon are the annulet, the mullet, and the boar. The four main colors (tinctures) are red (gules), gold (or), blue and silver (argent).

The bold red color on a heraldic shield is known as gules. It has a long history within heraldry, it is known that one of those who besieged the Scottish castle of Carlaverock in 1300 was the French knight Euremions de la Brette who had as his arms a simple rose-red shield. Later writers associated it with the precious stone ruby and the metal iron, perhaps because of the red glow of iron in the heat of the blacksmith’s forge.[1]

In the middle ages, the wild boar, a far more fearsome creature than its domesticated relative, the pig, was a fierce animal in the woods. It was more commonly seen and hunted as game many centuries ago. The boar was known as a sanglier. In the Hooper Crest the wild boar appears in many of the same places and poses that we normally see the lion, standing on hind legs with its head at the top of the crest; however, posturing with its head up and tongue lashing out, the boar is in a position known as enraged! We should not be surprised then that this “fierce combatant” is said to be associated with warriors.[2]

The bright yellow color frequently found in coats of arms is known to heralds as Or, or sometimes simply as Gold. Along with, argent, or Silver it forms the two “metals” of heraldry – one of the guidelines of heraldic design is that silver objects should not be placed upon gold fields and vice versa. The gold color is often associated with the Sun, and the zodiacal sign of Leo.

Argent is the heraldic metal Silver and is usually shown as very pure white. It is also known more poetically as pearl, moon (or luna). In a sketch or drawing it is represented by plain, unmarked paper.

For easy recognition of the items on a coat of arms, and quick identification of the owner, family crest makers use bold simple shapes. Simple geometric shapes are often used for this purpose and the annulet is a good example: a circular ring of any color. They also appear side-by-side, interlaced, or one within the other, all of which are very pleasing additions. Circular rings are thought to be one of the important symbols of the ancient pilgrims.

Some Hooper Crests have a heraldic mullet, shown as a regular, five-pointed star. This star was not originally an astronomical object, but represented the spur on a horseman’s boot, especially when pierced, with a small circular hole in the center it represents a type of spur known as a “rowel.” The ancient writer Guillim associated such spurs in gold as belonging to the Knight, and the silver to their esquires. In later years, five-pointed star became linked with the true celestial object, the estoile and termed it a “falling star,” symbolizing a “divine quality bestowed from above.”[3]

Where are the Hoopers from?

William Hooper, who we claim at our ancestor, was born Northern Ireland (Londonderry) in the last 1780’s. He escaped one of the famines in the region and arrived in Maryland about 1800. He went to work in the dry good business with George Hardester in Baltimore. Some historical reports state that he was as young as 12 years old, when he arrived in the US, but child labor laws were not in effect. 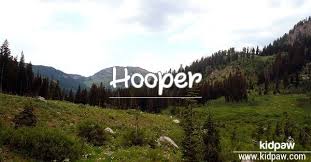 The surname of Hooper has an Anglo-Saxon, medieval Old English origin, and is derived from a “cooper” who is someone who fitted metal or wooden hoops on wooden casks and barrels. The word “Hoop” comes from the middle English word, which means a hoop or band. When adding the suffix “-er”, which means “doer” or one who works with or does with, the surname Hooper becomes a descriptive term of one who works with hoops, most likely in the barrel making business. At this time in history, surnames began with the occupation of the actual name bearer, and then became passed down as the generations went on. The original person to bear the surname Hooper, actually was a hooper, or someone who worked with hoops.[5]

In 1880, a less common occupation for the Hooper family was Carpenter. The most common Hooper occupation in the US was Farmer. 34% of Hooper’s were Farmers. Farmer, Laborer and Housekeeper were the top 3 reported jobs worked by a Hooper.[6]

The first recorded spelling of the surname Hooper was in the year 1228, by Adam le Hoper or Hopere, who was named in the “Close Rolls of Wiltshire” during the reign of King Henry III, who was also known as “The Frenchman” and ruled from the year 1216 to the year 1272. In the 1273 Hundred Rolls of Devonshire, William le Houper was noted, and this document was recorded in the Register of the Freemen of the City of York, which was dated in the year 1367. In the year 1444, Ralph Hooper was record in “A Descriptive Catalogue of Ancient Deeds,” in Devonshire.

Hoopers in the United States:

The first recorded person to migrate to America with the Hooper surname was William Hooper, who at just eighteen years of age, embarked from London on the ship named “James” which was bound for New England in July of 1635.