What he didn’t tell us was that in those generations, people were marrying first cousins and half cousins and were always using last names as first names, and having nine children in a row. The genealogy gets very complicated.

Our grandmother, Mildred Anderson Hooper, grew up in Louisville, Kentucky, and she was a fire cracker. She said that we were collaterally related to Meriwether Lewis through his mother, Lucy Thornton Meriwether Lewis, and through Meriwether’s older sister, Jane Meriwether Lewis. Jane, as you can see from the abbreviated genealogy below,[2] married Edmund Anderson. They were first cousins and had nine children. Collectively they brought the Meriwether, Anderson and Lewis names into the family. 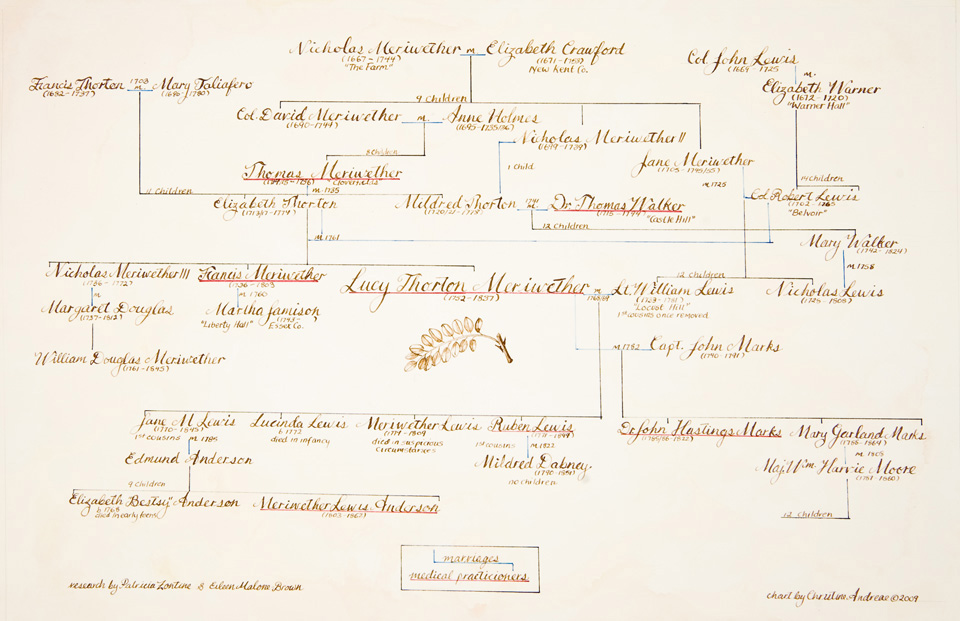 Tracy and I named our oldest daughter, Margaret Meriwether Hooper, because it seemed a regal name with elegance. We have always called her Margaret and felt she could change it to Margie, or Maggie or Peggy or whatever nickname she wanted later in her life. She has held fast to Margaret. We liked the alliteration or her full name and we appreciated it’s stretch back in history for historic, family names.

Even though the Lewis family was abundantly rooted on my dad’s side of the family, it was our mother, Eleanor Evans Hooper, who nurtured the history the most thoroughly. We had a family ritual of going on camping trips “out west” for our dad’s two week summer vacations. We sprinted to some place as far west as we could get and as close to a National Park as we could, and return on time to our home in Philadelphia (or later Baltimore) just as the vacation ended. For several of those camping trips, we followed in the footsteps (or paddle strokes) of the Lewis & Clark Expeditions.

Mom picked up a copy of the Journals of Lewis & Clark edited by Bernard DeVoto from the Pratt Library and we followed their journey up the Mississippi, up the Missouri, across the Rockies to Fort Clatsop in Oregon and back again. We could not cover the entire Expedition in one summer, but they broke the trip into several summers, while Eleanor and Millie, our oldest sisters, were off to summer camp. Some of our most formative family experiences and most memorable history lessons were from those trips. With mom’s enthusiastic and sweet reading voice, we learned of the campaign of the Corps of Discovery. Her voice was a calming influence on all of the passengers, including dad.

This is the portrait we have in our house of our ancestor, Meriwether Lewis, with his foreshortened arm and his hand on a book which we were told was a copy of his famous Journals. The image out the window is of a river with some men on a boat. Again, this seemed further proof of the Corps of Discovery and their trip to explore the land the US bought from France in the Louisiana Purchase.

Some mystery surrounded the death of Meriwether Lewis, which is well-researched and recorded in books over the years. What seems clear is that Lewis was someone who suffered from depression. His episodes of “severe melancholia” were legendary and prevented him from writing for weeks at a time, which was highly unusual.

His time post-Expedition was brief. Jefferson named Lewis as Governor of the Louisiana Territory for his leadership with the Corps of Discovery. Lewis made some trips to Virginia (so see his family and recover from a brief illness) and to St. Louis to assume his new post as governor. His life came to an end in 1809 on the Natchez Trace in Tennessee, which was an often used trail for those traveling from Louisiana Territory to parts north and east. Lewis was headed to Washington, DC, to meet with President Jefferson, when he met with his untimely demise.

Was it suicide or a murder by robbers on the Trace? We will never know for sure, but it makes for a good mystery for ghost stories and family lore.

[1]  We are not absolutely sure that the image in our family portrait is of Meriwether Lewis. My grandmother, Mildred Anderson Hooper, claimed she bought the painting at a sale at the Walter’s Art Gallery. However, we have no proof of its provenance, only family lore. With careful inspection, the two portraits appear to be different men. In the famous Charles Willson Peale portrait, which was painted after the explorer returned from the Expedition, we see Lewis a few years older than our rendition. He appears to have blue eyes and a graying comb-over. The family portrait is a man with brown eyes and a different hair line, less defined chin and profile.