They emanate from the rod at the speed of light, bounce off the ionosphere and take messages to distant places. What does? Why radio, of course.

They: radio waves are known to travel at 300,000,000 meters per second and end, wherever they end, no matter what frequency they are. These magical combinations of electricity and magnetics are everywhere, yet they are invisible to the human eye. When modulated at the right frequency and in the right mix, the waves can transport sound, not at the speed of sound, but at the speed of light. Pretty darn amazing!

The Rod: the company, TESSCO, sells more antennas of all sorts that many other sources put together. Known as The Total Source, it is the wholesaler of choice for anything that has to do with the maintenance, construction, diagnostics, and the operation of a radio network. Those antennas are made of metal and plastic and send out those electro-magnetic waves to any place on earth. Only by jamming the airwaves can the waves be muted. 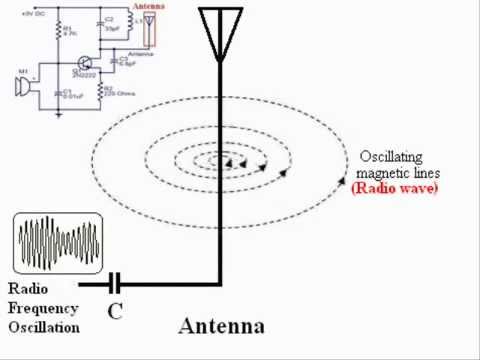 The Speed of Light: light does not mean that radio only works in the day. It works at anytime of day or night. The radio waves are not in the visible spectrum, but they are there. You can see them with an oscilloscope, as the waves move at difference frequencies, modulation, bandwidth, and amplitude. Although there is a full complement of frequencies, the commercial and amateur radio waves generally cover the HF (High Frequency is from 3 MHz to 30 MHz) , VHF (Very High Frequency is from 30 MHz to 300 MHz), and UHF (Ultra-high Frequency is from 300 MHz to 3,000 MHz) parts of the spectrum. They are not at the speed of sound, but many times faster.

Ionosphere: That layer of the sky from which lots of radio waves bounce. Here is where the radio head comes in. In order to be a certified radio head, applicants have to pass a Ham Radio test. The lightest class is the Technican’s license. Beyond that are General and Amateur Extra licenses.

Distant Places: many ham radio enthusiasts call the International Space Station, because they can.