There are two types of witness posts, generally: the older one is a steel post bearing white sign with black letters saying “Do not disturb nearby survey mark” and the newer one is an orange plastic post with the same type lettering on it. 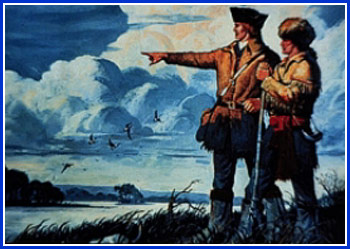 The morning had started out drizzly and overcast, but at the two mile mark, the sky started to clear, the road turned steeply up hill, and my pace slowed considerably. Running on the Lewis & Clark Road outside Seaside, Oregon, it was time for a “nature break.”  The coffee and the water I gulped for hydration were calling: my bladder was screaming. Locating a scenic, semi-private spot for my salute, I spied an orange stake hammered in the ground along the side of the road with some printed warnings on it. “Witness Post” it said, and seemed to be advising passersby not to dig with a backhoe in the area. Must be a buried utilities caution or something.

Finishing my business I ran further up the winding hill, passing a tall stand of Douglas fir and alders, and reached an elevation about 500’ above Seaside’s surfer cove. The panoramic view became expansive. At the top the trees had been sheered to stumps nearly as far as the eye could see. A few more orange posts were spotted on the ridge and I thought about them as the hill descended gradually. This is private timber area today, but the view of the coast and the valley behind led to contemplation about the road and who had been here before me. What post was I witnessing?

Granted, it has been over 200 years since Lewis & Clark passed this way from Fort Clatsop to Seaside, but the quiet road seemed too rural for such intrusions to nature. A trail, dubbed the Clatsop Loop, passes near this point and roughly traces the path that the Corps of Discovery may have taken overland from Youngs Bay to the Pacific Ocean, where they set up camp to boil sea water for salt. The strain and labor of their trip must have taken a toll. The journey over those miles, carting buckets of sea water up the beach and sitting for hours and hours, while the saltwater boiled and water evaporated enough to harvest as sea salt. A critical preservative for the fish and game, the Corps members needed sea salt by the barrel-full for their return overland trip to St. Louis. 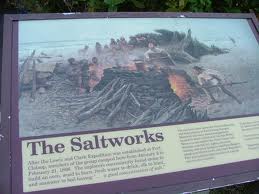 While in Oregon, the Corps also climbed up 1,200 feet to the top of Tillamook Head and down the other side to see the grounded whale near Haystack Rock (now Ecola Park and Cannon Beach).  Ecola means “whale” in the Clatsop native language. Imagining the scene from 1805, what comes to mind is the stench of the whale blubber, which the explorers and the Indians may have harvested by boiling it for fuel.

A lot has transpired over the 200+ years since the Expedition came to the Pacific Northwest, but, there are signs of their encampment everywhere. Such garden spots as Cape Disappointment, Dismal Niche, and Fort Clatsop have been loosely linked together to become one of the latest US National Monuments in our country’s recreational park system. The Fort was burned down accidentally by some visitors a few years ago, and it has been restored, minus a few priceless artifacts, to what it may have looked like when the Corps spent three miserable, mosquito-infested, cold and wet months in the Northwest.

In 2012, another man, Ben Jacobsen from Vancouver, WA, is attempting to create the first salt company to harvest Oregon sea salt, since the Corp of Discovery. His Jacobsen Salt Works is off to a good start: time to wish him well.

What do we witness? And what topics require that I write a post? The list is long. With these essays, letters, obituaries, and testimonials I intend to survey the landscape, bear witness to people and places and things that attract my time and attention, and to stick a stake in the ground for them. This is the first such post. Of the topics, the people are the PEOPLE are the most interesting to think about and feel deeply for than some of the other notions. Yet those tales and words, and birds will show up from time to time as Posts of interest to me. The stories behind these Witness Posts are the real inspiration. May they do the same for you.

Since this first post above in 2012, my writings have morphed, as stories often do, to include times and places of disparate origins and endings. Posts have expanded to Tales, Flowers, Birds, Biographies, Tributes, Musings, Word Smiths, Kachinas, Myths, and more. The stories have gotten shorter over the past few years, as few people have the time to dedicate to news, much less a random blog.

That said, PLEASE keep reading, as I feel that the stories are worth a moment of your reverie.