For 10 months in 2012, as a Visiting Fellow at the Murdock Trust in Vancouver, WA, I was so pleased help the Trust look deeply into their potential investment risks. They asked that I work in a seldom-used conference room, named Sam Smith, after one of the Executive Directors. From that 7th floor window was a clear view of The Providence Academy a few blocks away.

As a “newcomer” to the Pacific Northwest (arrived in 2001), I only knew one of the tenants of the building, simply called “The Academy,” which appeared so grand and so old for this young city. After a series of encounters with one pushy mom, one nun, and one not-so-old veteran, I came to understand the history of The Academy and the mission it represents today. The encounters with these three people, while all very different, wove a web of connections that create the fabric of my experiences in the Pacific Northwest. Each one of these people exemplifies what economist Malcolm Gladwell calls a super-connector: the network of relationships they bring into their sphere creates tremendous influence for good. These super-connectors, with ties to The Academy, include Jane Jacobsen, Maya Lin, Susanne Hartung, Mother Joseph and Ed Lynch.

The pushy mom is Jane Jacobsen, the former Executive Director of the Confluence Project, which had an office in the Academy. Jane may not exude business savvy, but she had the persistence and personality to bring together people for all walks of life. Her magic was to help form a shared vision for the 200th anniversary of the Expeditions of Lewis & Clark.

Another former colleague, David Nierenberg, was so impressed with Jane’s work. She brought together the various constituents she needed to get the Confluence Project off the ground. Antone Minthorn, who is a tribal elder of the Umatilla Indians, had viewed a documentary about Maya Lin’s Vietnam Veterans Memorial Wall and he began thinking out loud with Jane Jacobsen about a project that would reflect his people’s role in the Lewis & Clark story. Minthorn had agreed to serve as Chairman of the Confluence Project, and he, Staffer David DeCaesare and Jane Jacobsen pestered Maya Lin for several years to take on the project. Their persistence paid off, as artist Lin, who was trying to defy the moniker as solely a memorial artist, agreed to take on the multi-year project in 2002. Jacobsen also courted elected officials, even Gov. Gary Locke, and eventually the Confluence Project won grants from the States of Washington and Oregon. Jacobsen got those stingy bureaucrats to blink, and they all streamed in to support the Project.

After some arm twisting by Jane and David Nierenberg, my wife and I donated money to the Confluence Project. David had encouraged the Hooper family pride angle to the gift, because my father’s side of the family is indirectly related to Meriwether Lewis. The Confluence Project features seven exquisite memorials designed in different locations from Cape Disappointment, where the Columbia River meets the Pacific, to the inland intersection of the Snake and Clearwater Rivers near Idaho. The monuments, originally designed to commemorate the bi-centennial became more broadly connected with the Native Indians, the landscape, the salmon, and the many other white exploiters of this region over the millennia. The work of Maya Lin, the world renowned artist and fellow Yale grad, created seven extraordinary monuments. Lin says the project is like “holding up a mirror to reflect back on Lewis and Clark’s journey.” 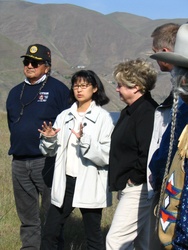 The second character affiliated with the Academy is Sister Susanne Hartung SP (Sisters of Providence). Sr. Hartung arrived at the Murdock Trust with Elson Strahan, who came to a grants meeting luncheon at the Trust. They spoke compassionately about the historical value of the Providence Academy, as it was being bought and refurbished by the Fort Vancouver National Trust. The $12million project to acquire the property is being headed by the third character, Ed Lynch.  More about Ed later.

Sr. Hartung has the unenviable title of Chief Mission Integration Officer for Providence Health & Services. While saying that mouthful, Sr. Hartung, always talks about Mother Joseph, the first Sister of Providence in the Northwest. Sr. Hartung has celebrated over 50 years in her order and she is the last remaining religious representing the Sisters of Providence to the 63,000 employees of the Providence Hospitals & schools. She has an important job that is rooted in the charism of the founders.

There is a statue of Mother Joseph in Washington, DC, included in the national Statuary Hall Collection. The inscription on the statue reads: “She made monumental contributions to health care, education, and social work throughout the Northwest.” Known as “the Builder,” Mother Joseph designed and/or supervised construction over 30 schools and hospitals in the Northwest, and she is recognized as one of the first architects in Washington Territory. 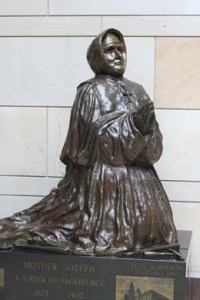 Mother Joseph was born Esther Pariseau on April 16, 1823, in a farmhouse near Saint Elzear, Quebec. The third of 12 children, she learned carpentry skills from her father and the domestic arts from her mother. At age 20, she entered the convent of the Sisters of Charity of Providence (later renamed Sisters of Providence) in Montreal, where she took the name Joseph in honor of her father. In 1856 the Bishop Blanchet of the Nisqually Diocese requested assistance and the Mother House of the Sisters sent Sr. Joseph and four other nuns to the Northwest to help.

On a cold day in December, 1856, five Sisters of Providence arrived at Fort Vancouver, just north of the Columbia River, ending an arduous 45-day, 6,000-mile journey by land and sea from Montreal. They set to work, converting an old Hudson’s Bay building into a combination dormitory and church, and constructing facilities for their school and orphanage. 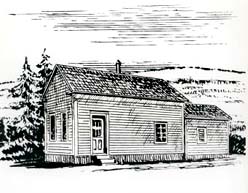 Despite primitive conditions and hardships, the nuns persevered, feeding the poor, caring for the sick and orphaned, teaching, and gardening. In 1858, they opened St. Joseph’s hospital, the first in the Northwest — one tiny room with four beds, benches, and tables carved by Sister Joseph (later given the title of Mother). In 1874, when space needs were critical, Mother Joseph designed the large, three-story brick building — a combination hospital, residence and academy (now listed on the National Register of Historic Places) — that building, the Providence Academy, became the sisters’ headquarters at Fort Vancouver. Clad in habit, with hammer and saw in hand, she personally supervised the construction of the Academy, sometimes ripping out faulty workmanship and redoing it herself. Over the next 25 years Mother Joseph went on a building spree that completed over one major school, hospital or institution a year in Oregon, Washington, and British Columbia.

To finance these new buildings and their work, Mother Joseph and some of the sisters launched what they called “begging tours.”  They spent weeks on horseback and camping outdoors to go to mines as far away as Montana and Colorado, where they appealed to lucky prospectors for donations. Sr. Hartung notes that Mother Joseph always brought along a comely young nun to help encourage the prospectors to donate to the cause.  Their records also tell of outwitting stagecoach robbers, and of surviving severe storms, brush fires, wolves, and even a grizzly bear.

By the time Mother Joseph died in 1902, she had been instrumental in the building of over 30 hospitals, schools, and institutions.  She is indeed among the most miraculous builders of intrinsic value in the entire Pacific Northwest.

Sr. Susanne has personally taken over 2,000 people to the Academy for tours over the past decade, which helps keep alive the spirit of Mother Joseph in Vancouver.  As a member of the Academy campaign steering committee, Hartung is a dedicated and integral volunteer.  She has rallied the employees of the Providence Health & Services community and challenged them to donate at least $1 per person, which would bring in a minimum of $63,000 from these employees.  Sr. Susanne is an integral part of the spirit of providence and success that influences the campaign.

Another powerful builder of the region is Ed Lynch, who was the head of the Peter Kiewit Company in the Northwest.  Ed and his late wife, Dollie, are synonymous with generosity and building in the Vancouver area.  And they put always their money where their mouths are.  To date Ed has committed $2 million to the Academy cause personally and he has begun to attract others to match his generosity!

Ed grew up in Southern California and served in World War II.  He returned to California after the war and graduated from Stanford with a degree in civil engineering.  He secured a job with the Peter Kiewit Sons’ Co. in California and was transferred to Vancouver, Washington in 1957, becoming the president of Kiewit Pacific Co, and serving in that capacity for 16 years.  He spent a total of 36 years at Kiewit, building hundreds of important projects and city infrastructure, before retiring in 1985.

I met Ed Lynch through the Nierenberg’s, as David and Patricia are among his greatest admirers.  I also re-met Ed and Dollie in an unlikely place: Jesuit High School.  One of their grandsons was a star performer in many musical productions, so I had the chance to see Ed and Dollie smiling and relaxing during intermission and ceremonies in Beaverton at Jesuit High.

Despite his advanced age (92), Ed Lynch is that not-so-old geezer.  He is very active in civic projects and is committed to his community through extraordinary volunteerism.  At one time or another he has served on dozens of non-profit boards for many different causes.  His most recent appointment has been to serve as the campaign chairman of the Fort Vancouver National Trust.  The goal of the campaign is to secure $16 million for the purchase and restoration of the Providence Academy.  In part, Ed has said the following:

“The Academy is not only an icon for the city of Vancouver, but for the entire Pacific Northwest and is arguably the most significant historic building in the region.  Restoring the building and property with once again bind downtown with the Fort Vancouver National Site and will also contribute to the city as the economic development asset we all envision it to be.”

What a remarkable place in Vancouver history this Academy has. Thank you, Jane Jacobsen, Sr. Susanne Hartung and Ed Lynch for all you do to improve the life of the community and to keep the important stories of our collective memory alive.