As a long time Baltimore resident and native Marylander, I have spent a lot of time around Diamondbacks … Terrapin’s that is. Terps for short. As our oldest daughter, Margaret, mocks, “‘Fear the Turtle’ is the best slogan in college sports.” Five of my siblings and my dad are partial to the UNC bumper sticker which reads: “If God weren’t a Tarheel, why is the sky Carolina Blue?” My wife, Tracy, is a proud Terp, so sprinkle some Duke Blue Devils in the mix and the family is full of former ACC rivalries.

Yet, for this Witness Post, neither college football, nor Big Ten conference schools are on stage. Another Diamondback all together is the lead character. For this Post the dangerous Diamondback with the forked-tongue gets top billing on the marquee. (Coincidentally, while writing this post, the Arizona Diamondbacks are schooling the Baltimore Orioles in inter-league play.  Still hate it when the Birds lose.)

Last weekend (August 12, 2013) a group of us were in New Mexico for the 80th birthday party for Chet Kubit, a dear friend. We decided to take the opportunity to go on a hike in the high desert outside of Albuquerque. Henry Berman made the first overture saying Mt. Taylor should be our destination. Molly Madden had a counter proposal that we stay closer to the Sandia’s. John Mayer and I were non committal, as we were fine with any decision, as long as we hiked. We decided to stick closer to Albuquerque.

On the hike we crossed paths with a large venomous snake, which we immediately identified as a “Western Diamondback Rattlesnake.” It crossed our trail and left its slithering affect behind. Out of respect, we gave the viper a wide berth. I don’t know about my fellow hikers, but as I came upon the snake, it scared the shit out of me.

Henry Berman, John Mayer, Molly Madden and I finally decided to hike in the Tent Rocks area of New Mexico, which is north of Albuquerque, just outside of the Santo Domingo and Cochiti Indian Pueblos.  Tent Rocks, which are more formally known by the name Kasha-Katuwe National Monument, are fascinating geologic formations of eroding lava, pumice, ash and rock. The harder layers rest precariously on the softer ones creating some unusual mushroom-like formations. From below they look like tall, thin, tepee-style tents, hence the nickname.

While still near the parking lot, Henry Berman could not get his Camelback water pouch to function correctly, so I volunteered to walk back to the car and fetch him our extra water bottle. Turning around to walk in the direction of the car, I took a step and froze. Sliding quickly in front of me, only a few feet away, was a very large snake. Hearing the viper rattle his tail, while making a hissing noise, I was nervous. He was warning: “Stop dead, buddy, you are dangerously close.”

When I caught my breath, I called loudly to my fellow hikers, “Come see this snake!” They came running and we all took pictures of the prize specimen. Henry Berman grabbed a bigger camera lens and John Mayer fetched binoculars for better views of this large reptile. Spotting its black-ringed tail and the large diamond pattern on its back, we knew it was a Western Diamondback. In less than a minute he had taken cover under a bush and coiled up, hissing at us and rattling.

Henry Berman got some great photos, but my heart was pounding too hard for other than a couple of cell-phone snap shots.

What was this rattlesnake doing at 10am on a hot August day? He was about 6 feet long and well fed. Having studied snakes at the Cottonwood Gulch Expeditions, I knew that snakes can strike from a distance of approximately half their body length. A 6 foot snake can strike at prey within 3 feet of its center of gravity. We stayed far enough away to be safe, but close enough to survey him. The males of the species are larger than the females and this one, at about 6 feet, was quite large. His mid-section was about as big around as my forearm, so we knew he was well fed.

The Western Diamondback Rattlesnake, Crotalus atrox, is known by several names. It is also called the Texas Diamondback, the Arizona Diamond, the Spitting Rattlesnake and the Fierce Rattlesnake. It is a common poisonous viper in the US and Mexico. The snake has been found from Arkansas to California in the States and from Hidalgo to Oaxaca and Veracruz in Mexico (see map of range below). The Western Diamondback population is healthy and steady, as it has adapted to its shrinking habitat with surprising vigor. 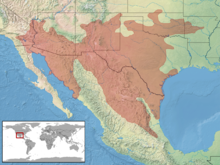 The Western Diamondback blends in remarkably well with the landscape as you can tell in the photos above, and, despite its size, it is easily missed by the common hiker. It is believed to be responsible for the majority of snake attacks and snakebite fatalities in northern Mexico and it is responsible for the second greatest number of snakebite fatalities in the US. To say it is dangerous to humans and other prey would be an understatement. 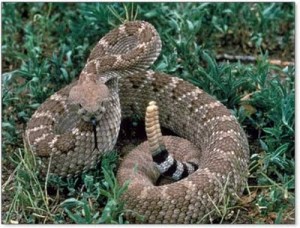 At the Cottonwood Gulch we have seen lots of reptiles and lots of snakes: side winders, prairie rattlers, bull snakes, garter snakes, coral snakes and many other species. Campers at the Gulch even caught a bull snake or two, which have found their ways back to campers’ homes. One summer, when such things seemed natural, I took home a bull snake in a pillow case to Baltimore. The airplane attendant was more concerned about my brother’s rat than he was about my slithering friend. That sleek snake lived in a large terrarium in our top floor bathroom, dining on a steady diet of white mice. That is until my younger sister left the cover off the terrarium and he slunk away to die in the attic. There must not have been enough mice in the eves.

Adult Western Diamondbacks are commonly found in lengths from 3 feet 10 inches to 7 feet, with most growing to about 4 feet. They weigh between 4 to 6 pounds, with the very large specimens weighing up to 15 pounds.  We had no scale or measuring tape, but the snake we spotted at Tent Rocks would have qualified as the Clydesdale of rattlers. Western Diamondbacks live up to 20 years and typically travel alone, outside of mating season. They are known to be one of the more aggressive rattlesnakes because they rarely back away from confrontation. When threatened, as we saw, they coil and rattle to warn aggressors. They are unafraid to strike, when agitated. The Diamondback feeds primarily nocturnally, ambushing its prey; however, during the spring and fall it also feeds during the day (diurnal), moving between hunting sites at dusk and dawn. The rattler we saw may have been feeding. The species live on a diet of prairie dogs, rats, mice, moles, squirrels, rabbits, birds, lizards and frogs. They can survive up to two years between meals, which seems extraordinary, though their metabolic rate slows down dramatically during periods of stress and near-starvation.

Despite its venomous traits and poisonous talent, the rattlesnake is not at the top of the desert food chain.  It is preyed upon by a variety of larger mammals and birds. Small rattlers are easy victims to such clever carnivores as coyotes, foxes, wolves, eagles and hawks. The snake sometimes gets in a lethal bite and wins to dine another day, but more often than one might imagine, it ends up as someone else’s dinner.

Speaking of venom, the bite of most American pit vipers includes a concentration of proteolytic toxins. This venom is an advanced and concentrated liquid that destroys tissues and other cells through intermolecular digestion. The Western Diamondback, on the other hand, primarily uses hemotoxic venom, which affects the blood vessels, blood cells and heart of the bite victim. The venom contains hemorrhagic components called zinc metalloproteinases. It also contains cytotoxins and myotoxins. Getting bitten by one of these bad boys is no picnic. The bite area may bleed profusely, due to the disrupted blood vessels, and the poison may cause permanent damage to the skin laceration and skeletal area.

General local effects from a bite include pain, bleeding, swelling, bruising, blistering and necrosis. The victim may also experience headaches, nausea, vomiting, abdominal pain, diarrhea, dizziness, hemorrhages and convulsions. Call the doctor! Although the likelihood of dying from a treated snakebite is small, if left untreated, the mortality rate shoots up to 20% of the victims, particularly young children.

Never having been bitten by a rattlesnake, I have no plans to take my chances. The passing of the beautiful killer in front of us was remarkable in many ways. I still have lots of questions, however: What was he doing out of his den in the middle of the day in August? Why had he crossed our path the second I headed back to the parking lot? What symbolism should I be deriving from the appearance and disappearance of this ancient reptile? Was Molly Madden the Eve in this tented Garden of Eden? What else were we supposed to find, that we may have missed, due to the viper distraction at Tent Rocks?

Henry Berman, who is obviously of superior intellect, says that the Diamondback knows where his bread is buttered: “This guy was just waiting around the picnic area, getting ready to pounce on the birds and rodents who wander in to eat the table droppings.” Sounds plausible. How else had this fellow gotten so plump?

More musings later, when I have had time to ponder the questions and disburse the toxins.