For 45 years the New York City Marathon has celebrated its prowess as a stage for drama, it’s run in the city that commercialized Broadway, after all. Founded in 1970 as an elite 26.2 mile run through a vast swath of New York City, the race was revamped by the NYRR in 1976 to cover all five boroughs of the Big Apple. Luckily for the runners in 2015, with memories of the Boston bombing in our collective memories, the drama in NYC eased all concerns for personal safety. All major races these days take extraordinary precautions to make sure that the runners and the courses are as secure as civicly possible. Just keep those feet moving!

From the electronic chips embedded in the race numbers to the dogs on the K-9 teams at the Ferry Building in Battery Park, the runners were surrounded with help. New York Road Runners put the safety of the runners at the top of the list and helped the athletes to relegate the potentials for danger to the back of their minds. With constant surveillance by a patchwork of airborne helicopters and the throng of blue and yellow jacketed volunteers on the ground, the runners could focus on their running strategies and their navigation of the congested roadbed ahead of them and not on personal security.

Tales from the start

The 2014 race is remembered for its frigid temperatures that challenged all but the elite runners, who seemed to enjoy the cold. Temperatures were near freezing, but the worst was the wind, which was blowing out of the northwest with speeds averaging between 15-25 mph and frequent gusts of 40 mph. The wind chill was in the teens! For the rest of the participants, who waited for hours outside of the entrance in Staten Island, it was a body numbing wait and and long, cold slog.

2015 in contrast was the perfect temperature, mid 50’s with no wind and slight clouds and overcast skies. Preparing for the worst, one of the sponsors, Dunkin’ Donuts, had complementary orange and fuchsia colored hats for all runners.  Nearly everyone donned one as we waited in our expected marathon time-specific paddocks for the race to begin.

The Dunkin’ Donut truck at the race start was full of it’s own throng of volunteers to make sure that the runners felt loved and cared for in the corrals. 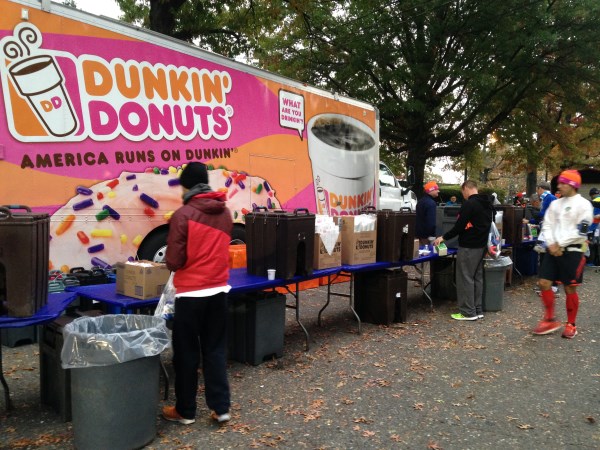 Employees and volunteers handed out hats from the crack of dawn until the last runner left for the race. They were friendly and helpful every step of the way.

With the myriad of sponsors from Tata Consulting Services (TCS) to ING and Asics, the race emblems were colorful, the most prominent was royal blue. All of the clothing and shoes and gear were featured by Asics, who had the majority of the Javitz Center covered with its wares. Again the friendly help and the patrons were easy to work with as the lines grew on Saturday before the race. Still, the entire operation was first class, as the guests and runners were handed shirts, bib numbers, electronic tags, and then allowed to buy all of the loot they could handle. In many instances runners don’t need another sock or shirt, but the idea of buying one with the NYC Marathon logo is too tempting, even for the most disciplined of us. Plus they do look cool and “thinning,” especially the black ones.

The sun broke through the overcast and the crowds swelled

The Verrazano Bridge was a gentle uphill to the start, with runners on both sides of the upper deck for our crew. The New Jersey barriers were the most obvious obstacles, as we made our way across the way to Brooklyn. Photographers stood atop the NJ barriers and took pictures of everyone, even Superman, as the runners made their way up the first challenge. The bridge top provides an outstanding view to the north of the waterfront of Manhattan and Liberty Island as the runners made their way to the next borough.

Coming into Brooklyn the upper and lower decks take different routes. The roadway can be tricky. Noticing the darker coloration of parts of the macadam, it was obvious that the City had worked overtime to make sure that the pot holes were filled. The black asphalt mounds were pounded down to near-road level at many intersections. However, with the numerous man holes, cement creases, missed pot holes and New Jersey barriers, the footing was still tricky. Every runner had to tread carefully to sidestep divots in the intersections, especially in the Bronx and Manhattan.

As the sun broke through the overcast skies and the crowds swelled the streets, a carnival atmosphere appeared. At certain intersections, as crowds spilled out of the sports bars and restaurants, the country specific cheering squads raised their voices to encourage the runners. The elite runners had passed these locations an hour ago, but the crowds kept up the cheering even louder for their favorite colors or country or name. “Hey, viva la France!” “Way to hang in there Joany, you rock!” Every word of encouragement is a tonic to weary legs.

My wife, Tracy, and our friends, Mary Bayles and Isabelle Jouanneau Fertig, were my stalwart supports along with the crowd of others they recruited to cheer for favorite racers. Definitely an adrenaline rush. 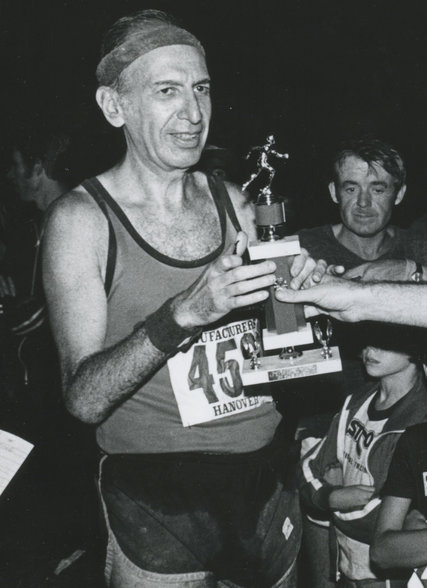 George Spitz, the guy who lobbied hard to change the course to cover all five boroughs ran for mayor of New York in 2001. He told the New York Times that he was the “only vegetarian, only road runner, only veteran of World War II, only senior citizen, only union person, only Orthodox Jew, and only high school dropout in the race.” The NYT had its own label for Spitz: “The King of the Gadflies.” The marathon he devised in New York has become the model for all big city marathons across the globe.

Thank you, New York, for a great race from start to finish. I will always remember the people in Brooklyn and the din in Manhattan. They made us seem like special people to come and run through their city. It is indeed a big 26.2 mile apple after all.