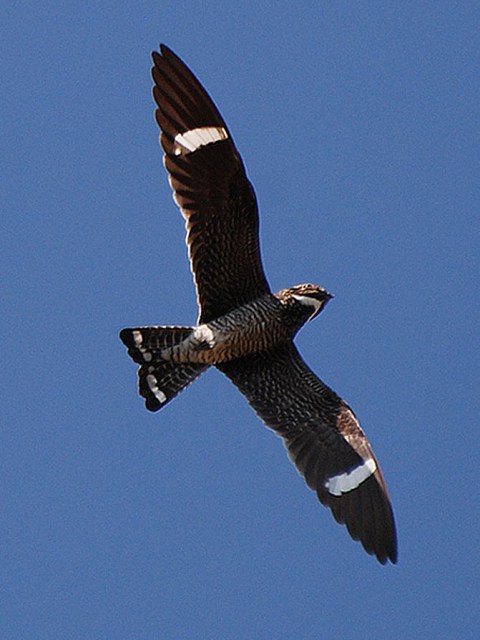 Indigenous tribes in the American Southwest believe that certain hawks suckle the milk from goats at dusk to feed their young. Still other people believe that it is not a bird, but a four legged beast that is drinking the milk of goats and/or cows. (More on the myths of the nighttime chupacabra later.)

The family of birds that thrive on this extraterrestrial liquid nourishment is called the nighthawk.  The nighthawk is a mysterious species: active at dawn and dusk, it streaks across the sky, has white wing bands, screeches a call that can wake the dead, and captures flying insects in its wide, whiskered mouth. Sometimes the species is called Nightjars and Bugeaters because of their nighttime foraging ritual and diet of everything bug. Related to Whippoorwills and Poorwills, the Common Nighthawk is a regular summertime visitor to cities, grasslands, and forests. Their sharp call, sometimes referred to as an “electric peent,” is often the first sign of a nighthawk overhead. They fly at dusk in long, graceful loops, flashing their white-colored wing patches, as they chase insects.

The nighthawk is ubiquitous as a resident of much of North America, including the continental 48 states and much of Canada and Mexico. See map below.

These fairly common birds are declining in population for various reasons. One reason might be that, unlike most other birds, they make no nest. Instead they lay their eggs on the ground and warm them during the day and night with their down. Their young are so well camouflaged that they’re hard to see, even when in plain sight. The adults are hard to spot when they land, as they seem to vanish as soon as they come to earth.

Back to the legend of the goat sucker, the most prevalent story has little to do with birds, per se. The modern-day myth refers to a bizarre creature that sucks the blood of farm animals, like a vampire. It could be a snake or a coyote or an alien beast, for all we know. The bird part of the myth scared people into believing that there were unusual avian creatures out there sucking their livestock dry of milk and blood.
According to Lucy Newman [1], this alien-like, genetically altered beast has been given the name ‘Chupacabra,’ which in Spanish means goat sucker. The two or four legged mythical blood-sucking animal has various physical descriptions from eye-witnesses over the years. Some versions sound more like a mutated dog that hops around like a kangaroo, others sound like a wicked alien with bad intentions, still others sound like some genetically altered coyote with back spines, long teeth and no hair. The creature has been accused of killing goats, sheep and chickens and generally terrorizing Mexico’s countryside. “It’s horrible because we don’t know what it is,” said a woman. “I don’t think its a coyote or a dog like officials say because a dog can’t kill ten goats with a single blow.”

Those who claim to have seen it say the goat sucker is big and hairy with wings, long fangs, and legs like a kangaroo. It was the “wings” that led people to believe these were birds, like the nighthawk.

In the north of Mexico, terrified peasants have tried to hunt the chupacabra with the help of police, but even a handsome reward hasn’t been sufficient to bring about the capture or a photograph of the mysterious creature.

This goat sucker is also being blamed for at least one broken marriage: A man has demanded a divorce from his wife after failing to believe her story that the marks on her neck were caused by the goat sucker. Authorities say tests on goat victims indicate the so-called goat sucker is probably a wolf or coyote. But that’s done nothing to abate the goat sucker fever sweeping Mexico.

Goat sucker T-shirts, some depicting former president Carlos Salinas as the creature, are flooding the markets. Some say the chupacabra has been invented by the government to draw attention away from Mexico’s acute economic crisis.

“The goat sucker is the government, because the people are suffering horribly from poverty,” one woman said. The real identity of the goat sucker may never be known. But in times of crisis and stress, it’s at least a distraction from the madness of politics.