Wake: verb, infinitive – to wake up, past tense – woke up, past participle – waked up
1. emerge or cause to emerge from a state of sleep; stop sleeping.
“She woke up feeling better.”

synonyms: awake, waken, awaken, rouse oneself, stir, come to, come round, bestir oneself

2. Irish – North American dialect
hold a vigil beside (someone who has died).
“We waked Jim last night.”

Wake: noun
1. a watch or vigil held beside the body of someone who has died, sometimes accompanied by ritual observances including eating and drinking.

synonyms: vigil, watch; funeral “a mourner at a wake”

2. historical (in some parts of the UK), a festival and holiday held annually in a rural parish, originally on the feast day of the patron saint of the church.

3. water that is cast aside as an object, such as a boat, moves through it causing a recirculating flow of liquid (wikipedia) 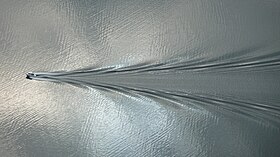 WAKE, lest we forget, is also the nickname of a certain ACC school in North Carolina, whose mascot is the Demon Deacons: