The year was 1938, one year after the famed triple crown winner, War Admiral, had won the Preakness Stakes in Baltimore’s Pimlico Race Course. War Admiral’s owners had collected the handsome prize winners purse of $75,000, which was a king’s ransom in the Depression-era races. An unlikely challenge was brought forward by the owners of Seabiscuit, from California.

Told in history books and in newspapers across the country, the head-to-head horse race at Pimlico went down in history as one of the greatest upsets of all time. 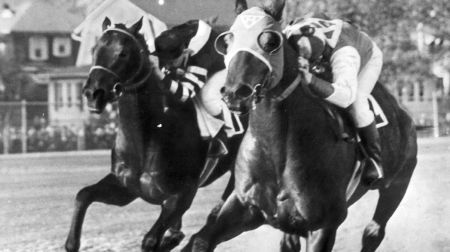 Seabiscuit on the right in the lead

The race took place in Baltimore, the historic second leg of the Triple Crown. A race course which may be on its last legs. A conflict over who controls the course is heating up at the gambling tables in Charm City and the city of Baltimore holds a losing bet.

A great American flat thoroughbred horse race, the Preakness, is held each year on the third Saturday in May. The distance has varied over the years, but has been 9.5 furlongs (1 and 3/16 mile) for the last few decades. It is the second jewel in the famed Triple Crown of thoroughbred horse racing, which starts with the Kentucky Derby two weeks before the Preakness and the Belmont Stakes two weeks after.

First run in 1873, the Preakness Stakes was named by a former Maryland governor after a winning colt at Pimlico. The race has been termed “The Run for the Black-Eyed Susans” because the winner is draped in a blanket of yellow daisies, altered to resemble the Black-Eyed Susan, Maryland’s state flower, which blooms in late summer. . With roughly 130,000 racing and cocktail swizzling fans in attendance, the Preakness Stakes ranks second in North America among equestrian events, only surpassed by the Kentucky Derby.

The only tip for the racing fans out there is “PSST, Secretariat in the 8th.” The fastest runner of the Preakness of all time. The upset at Pimlico was Seabiscuit, one for the books.