It was the 4th of July, 1965, and our Dad was hiking with his three oldest sons to a lake he had spotted on the topo map. The lake was located 4,000 feet up a trail in the mountains. We were camping in the Grand Teton National Park and he felt that fishing for dinner was a good way to spend the day with his boys. It was Mom’s birthday and she had encouraged Dad to do what he really wanted to do for the day. Fishing got his adrenaline flowing. Mom was not a fishing fan, but besides a cold beer and chocolate, she loved nothing more than fresh fish for dinner.

Mom had broken her hip in a horseback riding accident a few years before, and she shuffled us and our gear into the car and drove us to the Lupine Meadows Trailhead. She and our seven-year-old sister, Nancy, watched as we trekked up the switchbacks toward the mountains. Dad thought that we would be back down the trail after four or five hours. Mom insisted girl-time was a great way to spend the morning of her birthday: she and Nancy would walk a little bit, write some letters, read their summer reading books, eat lunch and meet us back at the trailhead after our fishing trip. 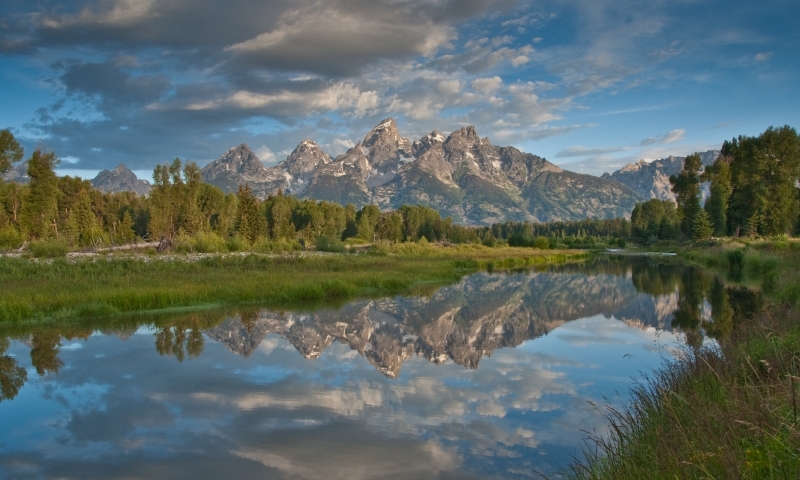 Our older sisters, Eleanor and Millie, were spending their first summer as campers in the Turquoise Trail at the Cottonwood Gulch Expeditions in Thoreau, New Mexico. Our toddler brother, Charlie, was with our grandmother, and our youngst sister, Mary, was not yet born. The rest of us were on our family’s ritualistic summer camping trip from Maryland to parts west. Mom and Dad had a two week vacation and they took the trip “to expose the family to the glorious National Parks” of our country. We kids dreaded the long, dreary 12-hour days staring out of the station wagon windows, but we loved the campsites, the sleeping bags, the campfires, the ranger talks and most of all the fishing.

Earlier in the week a Jackson Hole fishing licence vendor was hawking his favorite gear. He insisted that we had to buy his lures “to catch the big ones in the deep pools of String Lake.“ Taking his advice we bought a passel of lures, got up early and walked to the easily accessible String Lake. Unfortunately, the only fish we spotted were mud-sucking carp. The prized trout, which were restocked annually, had long since been caught and consumed by other anglers.

Still determined to catch some fish, Dad scoured the maps for some other lakes that were off the beaten path. The park rangers pointed to a few remote lakes and said that the trout were worth the climb. This morning we were heading to Surprise Lake, which was surely still a prime trout spot. It was also a route that skilled climbers used to ascend The Grand. Dad had selected his favorite fly rod and we had our trusty spinning rods and reels. In our tackle box we boys carried our red-and-white bobbers and our reliable, special bait: worms — big, fat juicy night-crawlers that we had bought at another store. We started up the long climb with a cold lunch and high hopes.

We donned well-worn tennis shoes and carried our small sack lunches in a day pack. We did not carry water bottles; instead we drank water from the passing streams — this was before we knew about the dangers of giardia. Dad had bought some new hiking boots that summer and he had only worn them once. On the steep ascent he soon developed blisters on his heels. Dad did not complain much, but by the occasional grimace, we knew he was in great discomfort. Stopping for water every mile or so, we all rested our feet and caught our breath. The air was getting thin and the huffing and puffing challenged our young lungs.

At about 3½ miles into the hike we hit 8,000 feet of altitude and Dad finally succumbed to the pain. As if from a mirage, a woman climber appeared. She was heading down the trail, and she stopped to say hello. Dad, trying not to lose his macho, asked her if she happened to have any Band-Aid’s. “Why YES, I do.” He quickly unlaced his boots, stripped off his socks, and exposed his blistered and bloodied heels. We all gasped. He wiped them dry with a paper towel and applied some ointment. Then the woman gently secured the Band-Aid’s on his heels. Dad earnestly said to the climber, “Thank you so much. You are my Florence Nightingale!” None of us boys knew who Flo Nightingale was, so the historical metaphor was lost on us.

The trail to the lake was much longer than our typical two-mile run, which we did with Dad on the Saturday Run for Your Life circuit through Towson, Maryland. We were really challenged by this hike. Plus the altitude was sneaky and made us pant for breath a lot. As we crested the final ascent into a glacial cirque, we spotted the lake. There it was: Surprise Lake. And what a surprise it was!

Mountains rose on three sides, creating a perfect bowl of snow-capped beauty. Weariness gone, we put down our packs and ran to the water’s edge. We scoped out the lake, spotted some fish along the edges of the mirror-like water and picked the best spots to cast our lines. We spread out around the lake, avoiding the tree branches in the lake so our hooks wouldn’t snag. It was remarkable how clear the water was.

Laurie caught the first one, a beautiful Cut Throat Trout, about a foot long. The worms were just the ticket. Ned soon followed, and Dad selected the perfect dry fly for the hungry fish. Soon enough I had one on the line and we were all grinning. Dad gave his classic “heee-heee,” when he hooked another one, and we could hear his glee echo across the water. We walked around the circumference of the lake, which was huge in my memory bank, and we caught another beauty with ‘good fight’ about every 10 minutes. We reached “our daily limit” in no time and went about the task of cleaning them for supper that night. Washing up for lunch, we all ate with pure, man-sized satisfaction. We told and retold the stories of the “one that got away” while fishing in Canada and on the Chesapeake Bay. This time with our Dad was just what the great outdoors was supposed to be like.

When we finished lunch, I walked over to the edge of the path and to my surprise saw Nancy skipping up the trail. She smiled as she skipped and declared that the walk was easy! “And Mom is right behind me.” The boys could not believe it. Nancy and Mom climbed the whole way? How was that possible? Sure enough, a few minutes later Mom came limping along to the lake’s edge. We asked with great concern about her hip and Mom insisted she was fine. “I decided to do the hike, because I am 40 years old and it may be the last real hike I can do. Plus, it is a beautiful day and Nancy and I wanted to be with you.”

Mom swore to Dad and the boys that she had taken her time, not rushing or hurting herself, but we knew it was strenuous nonetheless and were astonished that she and Nancy had made it. What a Grand surprise for the Hoopers! We showed off our bountiful catch, finished stowing our lunch bags and headed back down the trail to the car.

The dinner that night was a trout delight, followed by campfire glazed S’mores. It was a memorable celebration of our nation’s and mom’s birthdays.

In 2013, I was visiting our daughter, Eleanor, who lived in Jackson, Wyoming. She took me on some great bike rides and hikes over the 4th of July. A few days later I hiked up that same 4.5 mile trail to Surprise Lake. It had been 48 years to the day, since our family had been to the Lake. Some comments by hikers on Trip Adviser called it the best trail in this part of the Tetons and not to miss it. What a fun return to see this pristine and beautiful part of the Rocky Mountains.

The next week Eleanor showed her real girl-power by running up and back that same trail to Surprise Lake in her sneakers. She extended the trip another 0.2 miles for a vista of Amphitheater Lake. She said it took about two hours. Wow!

All of the Hoopers boys who have been on that hike love and admire the women in our family who have the grit and stamina of our Mom. We are grateful for our breath, for our legs and feet, and we are grateful for the Florence Nightingale’s along the way. We all need band-aids from time to time.