Early mornings driving past Gilman School, we usually spotted Reddy Finney, in his tweed coat, picking up trash from around the bushes in the front of the school. It was the mid-1960’s and our grandfather was driving us to Cathedral School a few blocks away. Mr. Finney told our grandparents he wanted the entrance to look tidy for all students and for the passersby. Mr. Finney always took pride in his workplace. When asked why he didn’t get the grounds crew to do the cleaning, he said, “I like to lead by example. Besides the grounds crew has enough on their hands taking care of the athletic fields and buildings.”

Athletics, according to Finney, was one of the most important parts of a well-rounded student. Besides English, math, religion, and history, few things measured up to sports in the early education of boys in the Finney family.

An outstanding scholar/athlete at Gilman School, Finney matriculated to Princeton and played three sports in college: football, wrestling, and lacrosse. He was voted All-American in football and lacrosse, the first athlete in the country to earn two such honors. In his senior year Finney was elected captain of the wrestling team. Demurring, as he often did to shine the spotlight on others, Finney added, “Despite being voted captain, I actually never wrestled in meets my senior year. We had this guy named Brad Glass at Princeton, who beat me out for a starting position. He was a terrific wrestler. I had to sit on the bench and watch him compete that year, winning every match and going on the win the heavyweight titles at Easterns (EIWA) and Nationals (NCAA).”

When asked how he became an All-American at football, Finney answered with similar deflection and unselfishness. “There was an outstanding running back in my class whose name was Dick Kazmaier. He played lots of positions: quarterback, half-back and kicker on the team. I was the center so I hiked him the football nearly every play. At the end of our senior season, when Kazmaier was named an All-American and won the Maxwell Award, it came time for the Heisman. When the voters for the Heisman Trophy watched the game films, they noted that Kazmaier had some good downfield blocks that gave him extra yardage and over 50 touchdowns. The other teams were so determined to tackle Kazmaier, they often left me unblocked to drift downfield. The sportscasters noted my number on many of the blocks and gave me All-American honors along with Kazmaier. It was luck and good timing. Truth be told, it was all about Dick.”

In light of his accomplishments, Reddy Finney had some tough legacy shoes to fill. His father, Dr. George G. Finney (1899 – 1982), and grandfather, Dr. John M.T. Finney 1863 – 1942), were both Princeton graduates. George attended Johns Hopkins Medical School, while John attended both Harvard Medical School and later Johns Hopkins Hospital for his surgery training. John Finney was also an outstanding athlete. He played varsity football for Princeton and then later at Harvard, when he was in the medical school.

The Finney elders were also fervently steeped in education. In the 1930’s Dr. John M.T. Finney was simultaneously the Chairman of the Board for McDonogh School, Gilman School, President of the American College of Surgeons and the Society of Clinical Surgery, and a member of the Board of Trustees at Lincoln University and Princeton University, all while holding down a demanding job at Johns Hopkins Hospital under the legendary Chief of Surgery, Dr. William Halsted.

Despite all of the doctors in the family, Reddy Finney chose a different path than medicine. He chose education, which must have taken his father and grandfather by surprise, and we are so glad he did. With a degree in religion from Princeton, he spent three years at Harvard earning a Master in Education. He wanted to return to his high school alma mater to make a difference. He was hired as a member of the faculty and staff at Gilman School in 1954. Finney was immediately saddled with a tough course load, teaching history, mathematics and religion, while coaching three sports, and raising a family.

Off the field the students were excelling in the classroom (attending the best colleges in the nation), and on the field athletes were finding success (Finney coached a football team to an undefeated championship season). He was a campus workhorse and the faculty noted how he and his wife, Jean, created a wonderful sphere of influence on the students at the school.

Racial tensions were high across the country in the mid-60’s, with few cities suffering from more violence than Baltimore. In 1967, while serving as the director of discipline for Gilman’s Upper School, Finney helped create the Upward Bound program, using federal funds to enroll students from impoverished backgrounds. Finney was convinced that one of the primary reasons for the tensions was ignorance. If students of all races, religions and backgrounds are educated together, play sports side-by-side, enter into conversation, they will cross the ignorance gap and come to an understanding and camaraderie.

The board recognized Mr. Finney’s progressive and inclusive contributions, when in 1968, they appointed him Headmaster. He worked extensively with other private schools in the area, forming an organization called BISF (Baltimore Independent School Fund), giving companies one charitable source that could help all private schools. I worked with the Dir. of Development at Gilman at the time and felt Mr Finney’s influence on the work.

In 1987, twenty years after starting the Upward Bound program, Finney improved the BISF model and he helped create B.E.S.T., a partnership that provides financial assistance for promising African-American students from the Baltimore area to attend 18 private schools.

Finney defined and elevated the post of Headmaster at Gilman for 24 years, retiring in 1992. Over those years Reddy Finney became one of the most esteemed heads of school in the country, as Gilman’s reputation and endowment soared. At many CASE conferences (Council for the Advancement and Support of Education) Gilman School was touted to be a progressive and inclusive “whole child” center for elementary and secondary education.

Having attended many functions at schools around the Maryland Scholastic Association over my twenty years there, it is fair to say that no one in the Baltimore education scene was as gregarious, interested in you, present to conversation, ingratiating in compliments, and joyful in spirit as Mr. Finney. Every conversation ended with a kind gesture of thanks for sharing. Some of his common greetings to me were: “How are your mom and dad?” “What’s the latest news on that great brother of yours?” or simply, “Mighty fine to see you again, Henry. How is McDonogh’s wrestling team going to be this year?”

With his clear-spectacle frames (we called them “Reddy Finney glasses”), he was on the sidelines at nearly every game, and in the audience for school assemblies, theatre productions, and “Travelling Men” a-capella concerts. He was a phenomenal advocate for Gilman pride. And he assembled around him an amazingly loyal cast of characters who were inspired to educate and challenge the boys of Baltimore.

One curious relationship Mr. Finney forged was with Maj. Alvin J. Levy, the Dean of Students at archrival, McDonogh School. For nearly 25 years they co-taught Sunday school to students who attended the Roland Park Presbyterian Church on Roland Avenue. It seemed natural that a religion major, like Finney, would find ease with a kindred spirit from a rival school. But the real story was that Levy was a master at deception. Levy was well aware of the Finney legacy (the McDonogh Middle School building was named after Reddy Finney’s grandfather). Leading religious studies classes together with Mr. Finney gave Levy the cloak of respectability that no one can buy. It was all a ruse. 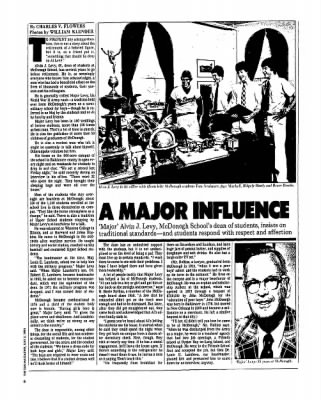 In 1992, the same year that Mr. Finney retired, Maj. Levy was charged by the Maryland US Attorney’s office with sexually abusing more than a dozen male students at McDonogh between the 1940’s and 1986. The pedophilia charges sent shock waves throughout Baltimore’s private and parochial schools. Neither the headmaster at McDonogh nor longtime admirers knew of Maj. Levy’s secrets. The news broke just as stories of the Catholic priests’ scandals erupted in the religious schools in the archdiocese and rattled church schools in places from Boston to Philadelphia and Los Angeles. Mr. Finney remained publicly silent on the case. Mysteriously, Maj. Levy died of a brain tumor just before the case went to trial. Levy’s secret preying on students duped Mr. Finney, as it did everyone else who knew him, except the victims. 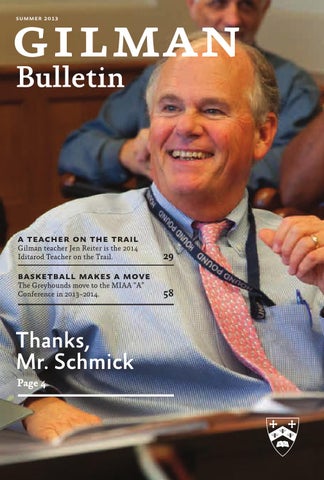 Mr Schmick on the cover of the Gilman Bulletin

During the Finney era, the faculty and staff he recruited and hired were extraordinary men and women with names like Gamper, Merrill, Greene, Brown, Barker, Porter, Campbell, Downs, Schmick, Schloeder, Baldwin, Bristow, Russell, Tickner, Legg, Woodward, Herrmann … the list is long and many more could be added. They came together with the cause of making a difference in the lives of young men, who would grow up and change the world, starting in Baltimore. Many graduates have done just that!

The trustees and donors put their money where their mouths were, raising millions of dollars for building projects, scholarships and the endowment. Standing at $150MM the endowment is the envy of the private secondary schools and many small private colleges in the country.

In his retirement Mr. Finney lent his name, his experience and his reputation to a firm whose goal was to help schools secure the right senior administrators to help them thrive. It is called The Finney Group. Their special niche was finding the right school head to sustain or change for the better a school’s legacy and future. The Finney Group is a strategic partnership that contracts with schools to locate, vet and select the right leadership so that the recruitment of teachers, the education of students and the cultivation of alumni can flourish

On the home front Reddy Finney was blessed with a strong family. His wife of 63 years, Jean Brown, worked at Union Memorial Hospital and lived on campus, working closely with her husband. She survives Reddy along with two daughters, Jeannie Emala and Beth Finney, both of Baltimore, and two sons, Dr. Stewart Finney of Baltimore and Ned Finney of Upperco. There are nine grandchildren.

The PBS special on Reddy Finney is a wonderful tribute to this giant of an educator. He is sorely missed by all of his colleagues, students, and admirers. One regret is that I never had the privilege of working with him directly and spending professional time with him as my mentor: