Barbara Mikulski, now 80, has served in Congress longer than any other woman in US history. The staunch Marylander is retiring after representing her state for 10 years in the House and 30 years in the Senate. At 4’11” she is a mighty mite of a representative; she is a tough negotiator and drives a hard bargain. Dubbed the “little general in pearls,” she doesn’t mince words. She never did.

Mikulski grew up in the Polish neighborhood of Highlandtown in East Baltimore. She is the oldest of three daughters and she always knew how to toe the line; she had a family reputation to uphold. Her parents were both of Polish descent and owned a grocery store. Her immigrant great-grandparents owned a bakery in the neighborhood. During her high school years, Mikulski worked at the grocery and learned how to keep an eye on the merchandise and the cash register: two skills she took with her for life. When she was at the Institute of Notre Dame she went to school by day, joined the debate team in the afternoon, and by night she delivered groceries to the elderly in the neighborhood.

A proud graduate of the Catholic schools, Mikulski earned a bachelor’s degree in sociology at Mt. Saint Agnes College (now part of Loyola University Maryland), and an MSW from the University of Maryland School of Social Work.

With her social conscience on her sleeve, Mikulski became a community activist, starting with her enlistment in “the freeway revolt.” Mikulski was proud of the strong ethnic neighborhoods of downtown Baltimore, and through those connections she helped form SCAR — Southeast Committee Against the Road. SCAR was the most enduring group of collaborators in the city; members were interested in progress and preservation. Mikulski went from house to house and neighborhood to neighborhood speaking to anyone who would listen. 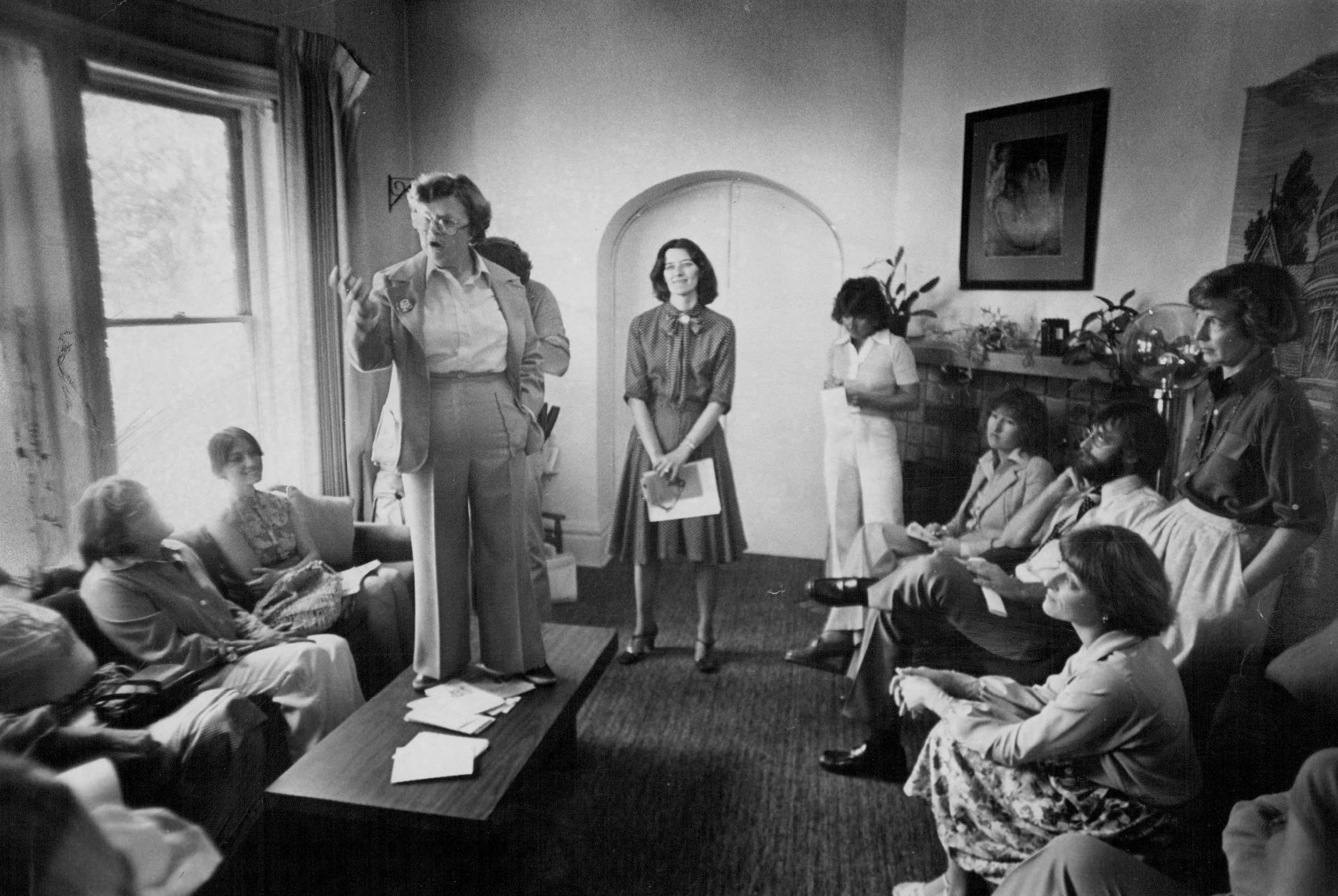 Mikulski, standing on a coffee table at a SCAR meeting [2]

Beyond high school debate, Mikulski cut her teeth fighting for the preservation of the Fells Point neighborhood of Baltimore, which was slated to be covered with concrete under lanes of US-695, the 61 mile loop of the Baltimore Beltway. Her fight focused on the over-reach of the federal highways system. Mikulski’s brash tactics landed her in the cross-hairs of then Governor, Theodore McKeldin. She railed against all road expansion that smelled bad, looked bad, and didn’t add up. She pointed to empty lots of Sharp-Leadenhall, near Federal Hill; she highlighted the infamous “highway to nowhere” in the Franklin-Mulberry corridor on Baltimore’s west side; and she protested the vacant fields along Boston Street in Canton. On each of these construction projects there was clear evidence of the heavy-handed politics and dull-headed development whose purposes seemed to be to raze rowhouses, run interstate highways through the heart of the city, and line the pockets of the politicians and developers. And she had endurance: the battles to protect places like Fells Point from the bulldozer lasted nearly a decade.

The activism won Mikulski a name for herself, but not every place she put her stake in the ground survived. Before all was said and done, blocks upon blocks of rowhouses had been demolished, particularly on the west side. The victories were bitter sweet. For all of the push and pull, give and take, Mikulski was a realist. She saw the political machine for what it was: inherently corrupt.

Baltimore is no stranger to political corruption, as exemplified by its poster child, Spiro T. Agnew, who took kick-backs for the construction of the Chesapeake Bay Bridge, a fraud that stripped him of his bully pulpit. The Attorney General of Maryland had accused Agnew of bribery, conspiracy, extortion and tax fraud while in office. Pleading “no contest,” Agnew avoided prison by agreeing to resign as the Vice-President under Richard Nixon. Agnew also dodged the Watergate fiasco, which blew up the executive branch the following year.

At the time Maryland politicians were lobbying for several federal roads projects to connect routes US-83, US-70, and US-95, all which either criss-crossed or originated in Baltimore. Route 70 was slated to intersect with Route 83 in Baltimore City. The 6 lanes of concrete were stopped dead, just a mile before slicing through Leakin Park, one of the few city parks on Baltimore’s west side. [N.B. The west side, with its high crime rates, has not fared well since SCAR’s success stopping the highways; however, neighborhoods like Canton and Fells Point not only survived, but thrive today as chic neighborhoods in the urban core.]

In the 1970’s Mikulski’s fight against government over-reach changed from outside of government to inside, when she ran for City Council in 1971. Five years later, she succeeded Paul Sarbanes in the US House, when he ran for the Senate. And she later succeeded longtime Maryland Senator, Charles “Mac” Mathias, when he retired from the Senate in 1986. She ran a bruising race against Republican candidate, Linda Chavez, and Mikulski became the first female to be elected to the Senate without a father or husband to lead the path.

Mikulski speaking to a patient in a military hospital (1980) By SSgt. James Greenwood [3]

Mikulski has a legacy of bipartisanship and feistiness. She is opinionated and vocal on many topics beyond Maryland. Mikulski has always shown concern for veterans, the unemployed, and the elderly. She has consistently harangued against corporate tax loopholes and has worked to lower taxes on the middle class. She has been a stalwart member of many committees: the Appropriates Committee (Ranking Member), the Committee on Health, Education, Labor and Pensions, and the Select Committee on Intelligence. She may not have been “to the manor born,” but she has clearly figured out her way around, over, and through the horsey crowd.

Her political platform has always supported change, collaboration, and listening, which are her keenest traits. She is a strong woman who has thrived in a man’s world. Opponents sometimes said that Mikulski was only a figurehead from women in Congress, a label she eschewed many times over the years. When she was honored in 1992 among Time magazine’s “Year of the Woman,” she said, “Wow, we get our own year! like the Year of the Caribou, the Year of the Mushroom, or the Year of the Asparagus!” As always, her sarcasm called it as she saw it.

November 2015, Mikulski was awarded the Presidential Medal of Freedom by President Barack Obama [5]

As Maryland journalist, David Hawkins, recalled, “Mikulski is beyond longevity. She has become the embodiment of ‘old school’ in an institution where the thrill of the new has taken hold with a vengeance. Beyond rattling so many glass ceilings during her four decades on the Hill, Maryland’s senior Democratic senator has stuck with all manner of virtues and behaviors that have fallen into disfavor by the newer members — devoted as they are to confrontation and content to claim deadlock as their principal work product. She operates on the belief that seniority should not only guarantee additional power, but should also create an obligation to advise, teach and promote those in the younger generation of lawmakers savvy enough to seek help from their elders. That’s why one of her lasting contributions will be her mentoring of the female senators, from both parties, who arrived after her.”[6]