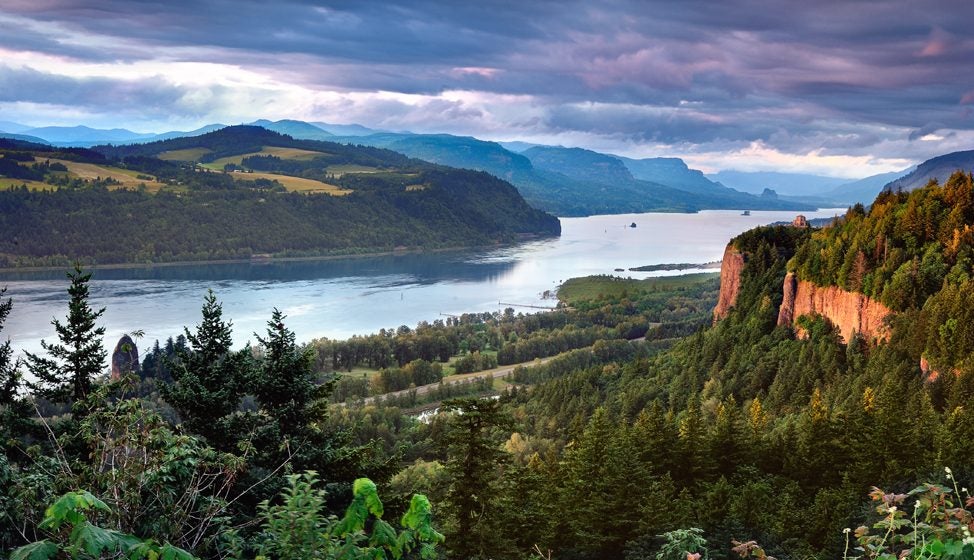 Every year on the day of our anniversary, my wife, Tracy, and I like to go for a hike in the Gorge or around a scenic area. Over the years we have covered some of the best day hikes in Portland, Eastern Oregon, the Columbia Gorge and the North Oregon Coast. This year (2018) we wanted to go to see the wildflowers and birds along the volcanic uplift, known as Coyote Wall in Southcentral Washington. Overlooking the Columbia River the entire time, it is a special area with great views of Mount Hood, the rolling hills of Oregon, and the volcanic layers of the Cascade Range.

There is apparently a quartet of hikes in the Gorge on the Washington side, that we have been told to have on our Anniversary Hike list: 1) Hamilton Mountain, 2) Table Mountain, 3) Dog Mountain, 4) Catherine Creek to Coyote Wall. Having done all of these but Table Mountain,Tracy and I were feeling pretty smug until we tried to recall the section named Coyote Wall. We had been there with our friends, Jean Killhour and Dave Akers, and had remembered well the Catherine Creek side of the hike, but barely remembered the Coyote Wall, except for seeing it on our exit to the parking lot. We decided to go again, this time entering from the Coyote Wall Trailhead and enjoying it from the other side.

We did not see a live coyote on the wall, today, but we saw a good variety of other wildlife, mostly flowers and birds.

View of Coyote Wall from the Trailhead

Since it was a Monday mid-morning in May, the Trailhead on Courtney Creek was nearly empty. Only a few intrepid runners were on the trail when we got there and we spotted only three other hikers on the trail all afternoon. The weather in Portland had called for showers, but we were blessed with crystal clear skies and only some cloud cover over the Cascades to the West. We hiked on mountain bike trails and jeep ruts most of the way, winding along a path on the eastern slope of the Wall with outstanding views toward the Columbia River and Eastern Oregon and Washington.

Our hike was a loop that circumnavigated the edge of an oak-tree lined slope, and some Meadowlark calling flats, as it switch-backed toward the Wall. Then the trail wandered through an area known as The Labyrinth. We spotted a cairn trail marker in the distance, and coming upon it, we saw the expansive vista of the Columbia Gorge heading west. Tracy asked questions about the volcanoes and the Lewis & Clark Expeditions, and the birds, which I gladly answered and made mental notes for this hike entry. She did not mind my fact filled head, as I served as the “Shell Answer Man,” for part of the day.

View all day of Columbia River

The area is totally volcanic and stark. The predominant color of the basalt layers is black. The dark rock is accented by bright splotches of lime-green lichen. Looking up from the lava layers, the colors are more varied: black, gray, lime-green, dark green (trees) and azure blue (sky). With a sprinkling of blue bachelor buttons, white yarrow, red tinge of the Indian Paintbrush, and the yellow of the saxifrage, you get the picture.

The black basalt is many, many layers of a geologic cake, as we looked across the Gorge to the Oregon side. When we got to the cairn, we saw that those layers extended to our side of the River as well, forming a magnificent wall. The angle of the segment is called a syncline, because of the way it folds with younger layers in the lower elevated sections as it tilts toward the River. At the edge of the Wall, the enormity of the basalt chunks that have fallen toward the River is as staggering as the drop-off: not the spot recommended for acrophobes.

The area was carved out millennia ago by massive water surges, known as the Missoula Floods.

During the Ice Age, the expansive sheets of Ice in northern Montana, near today’s city of Missoula, were stacked in layer upon layer of glaciers. The glaciers spread over most of the northern tiers of the North American continent. The exploding volcanoes (which form the backbone of today’s Cascades) melted the ice so that it pooled into large lakes. Whenever the volcanoes exploded and spread their basalt blasts over the area, the lakes expanded and the water sought lower ground. From time to time the lakes’ walls would burst and the resulting water floods surged downstream. These violent and sporadic floods carved out the easiest route toward the ocean. The hundreds and hundreds of lakes and torrents of water-churning, channel-carving floods dug out the Columbia Gorge. The Columbia River channel is the signature water flow from the Missoula Floods. Nearly a mile deep in some areas, the Columbia Gorge is one of the most well-known destinations on the Washington – Oregon boarder.

What a magnificent gift from nature those floods gave us!