Chief Massasoit of the Wampanoag Confederacy

There is a small cul-de-sac in the Bernal Heights neighborhood of San Francisco, of all places, named Massasoit. The name is rich in the American tradition, often lost to time and place. What that particular street name is doing in San Francisco is a mystery: it was either named by a family with New England connections or one with a fondness for Native American history.

The word Massasoit was the title given to the Chief of the Wampanoag Tribe (aka the Wampanoag Confederacy) of Native Americans. They were one of the dominant Indian tribes in what is now Massachusetts and Rhode Island. Chief Massasoit was the leader who saved the first Pilgrims from certain starvation during the winters of 1620 and 1621, after the Pilgrims landed at Plymouth Rock along the Atlantic Coast. The Pilgrims had sailed from England to the new territory to avoid religious persecution that had threatened them in Holland. The earliest years of the immigrant colony’s founding were challenging and growing sustainable crops was a constant struggle. The Wampanoag Chief taught the Pilgrims where to plant their crops, how to grow the best varieties and the ways to harvest them successfully.

Chief Massasoit developed relationships with the early immigrants, many of whom history buffs will remember from their grade school colonial history lessons: Miles Standish, John Carver, William Bradford, Stephen Hopkins and Edward Winslow, among others. Fifteen years later, in 1635, the Chief helped forge an alliance with other Indian tribes, which protected the Pilgrims during the violent Pequot Indian Wars.

The storytelling and retelling of the first Thanksgiving, the typical fare for elementary school plays, has been depicted for generations. The Pilgrims in the plays are often pictured eating a harvest meal with the Native Americans. In the school plays, the peaceful tribe members are the Wampanoag Indians. Chief Massasoit, in most versions, is the featured guest of the Pilgrims, as they serve the Chief and his fellow tribe members native corn, squash, venison and turkey. [1]

The real Thanksgiving story, however, is believed to be the other way around. After a brutal fall, rations were low, few seeds grew in the gardens, and the Pilgrims were in great fear of winter starvation. The Wampanoag, who had lived in the area for the last 12,000 years, had hunted and gathered food provisions for themselves. They heard the Pilgrim firing their rifles and realized it was for an important community meal. The Wampanoag then harvested their corn, cut their tobacco, killed the deer, caught the fish, and then seasoned the meat and seafood. Next they cooked the meal and brought it to the white settlement for that first feast.

Instead of the Pilgrims serving the Native Indians, the Wampanoag were the ones who prepared and served the harvest-time meals. Whether there was an actual Thanksgiving Feast is pure rural myth, as there are sparse records beyond oral history and primary school fabrications. It is believed that the first meal was in 1621 and that about 100 people attended the three-day celebration. What is known is that the feast was critical to the food security of the Pilgrims in those first few seasons. Sadly, the early peaceful Thanksgiving traditions lasted but one generation in New England.

Not surprisingly, the Wampanoag do not share in the popular reverence for the traditional New England Thanksgiving. For them the holiday is a reminder of betrayal and bloodshed. Since 1970, many native people have gathered at the statue of Massasoit in Plymouth, to remember their ancestors and the strength of their Wampanoag people. [2]

The word Massasoit means ‘Great Leader of Sachem’ and is sometimes used to refer to a collection of Native Americans. In the history of the colonies, however, the term is more often used to refer to one man, whose Indian name was Ousamequin. Many of the stories, which are handed down in oral tradition, honor Ousamequin as an extraordinary leader of his Wampanoag Confederacy.

The connection to the Hooper Family, though tenuous, comes through a business relationship that flourished in the early 1960’s. In that era many of the “Northern Mills” in New Hampshire, Massachusetts, Connecticut and Rhode Island were closing, as the cotton textile industry became extraordinarily competitive internationally. The companies were particularly vulnerable if their natural resources and labor costs were rapidly rising and their customers were inconsistent. Many of the most successful companies sourced their raw materials (such cotton, hemp, flax) from growers whose farms were hundreds of miles away from the textile mills, which put a premium on transportation costs.

The millers generated electricity on water wheels, which they built along New England rivers. The fast moving waters provided these mills with an unique advantage for a period of time. Eventually the mills employed highly skilled and relatively expensive labor, which dampened the economic advantages of their river-side locations. With the rising costs of transportation, raw materials and labor, the longevity of the mills was thrown into jeopardy by less costly international alternatives.

In the early 1960’s the geographic advantages of river-produced energy quickly shrank and even well-run companies fell on hard times. Many of the companies along those rivers in New England, which were once powerhouses of production in various industries, were blunted by the availability of cheaper labor, lower crop prices and cheaper transportation from companies in the Caribbean, Mexico, Central America and Asia.

The Hooper Company had bought a company, called American Textile Products, from Cincinnati, Ohio, which made industrial textiles that catered to the sanitation industry. They competed head-to-head with the likes of Rubbermaid, Fuller Brush, and others for its fair share of business in a tough market. As a “tuck-under purchase” the Hooper Company also acquired Masco Products, which were produced by Massasoit Manufacturing Company, based in Fall River, Massachusetts. [3] 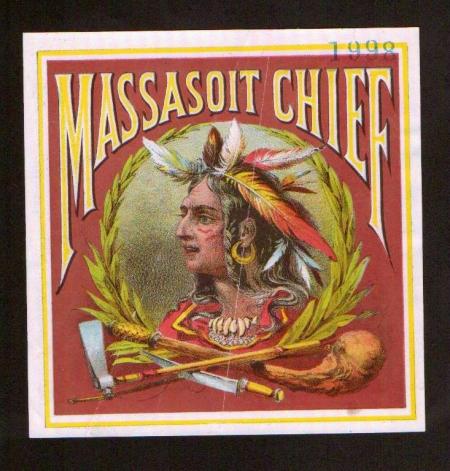 The Masco Textile Products were marketed under the American Textile Product name as some of its industrial cotton textiles in its business line. The products held niche positions in the marine and industrial supply businesses, going to owners of wood vessels in need of annual repair. One product was a caulking cotton which helped boat owners sure-up the hulls of the wooden boat fleets. With the advent of fiberglass and aluminum hulls, these products were the “buggy whips” in an evolving market, nevertheless they were not easily replaced with more modern solutions for boats with wooden hulls.

The final resting place of the Massasoit Manufacturing Company products is unknown, but there is hope that it’s peace is noteworthy and honorable, along with Ousamequin, the great leader and the original namesake. [4]

Bronze of Chief Massasoit in Massachusetts

[4] Some believe that the name of the state of Massachusetts comes from Chief Massasoit, but that seems apocryphal. The word Massachusetts is an Algonquin Indian word which roughly translates to “large hill place” or “at the great hill.” In the native language the word is spelled massa-adchu-es-et, where “massa” means “large,” “adchu” means “hill,” “es” is a diminutive suffix and “et” is a locative suffix that identifies a place. The word specifically refers to the Great Blue Hill in Milton, Massachusetts which is an ancient volcano that was last active over 400 million years ago.