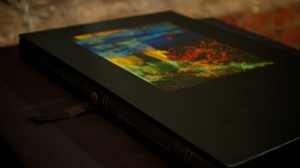 Makoto Fujimura was about to deliver his “Brown Bag Lunch” reflections on February 2012 at the Murdock Trust in Vancouver, Washington.  Steve Moore, the Executive Director at Murdock, had invited Makoto, or “Mako” for short, to discuss his creative process with the employees of the Trust.  As a Visiting Fellow at Murdock, I had heard that, if things worked out, Mako might follow as a Visiting Scholar at the Trust in 2013 or 2014.  We were all looking forward to hearing Mako’s comments at the lunch.

The other reason that Mako was in town was to be the Keynote Speaker at a reception at the University of Portland (UP) in Northeast Portland.  His original works, in a collection entitled The Four Gospels, were on display in Franz Hall on campus.  Mako was invited to deliver a talk about the sources of inspiration for his collection.  He was on a US tour that included the Maryland Institute of Art in Baltimore and the Yale University Art Gallery in New Haven, Connecticut.  Having grown up in Baltimore and attended Yale, I was very familiar with both of these places on the exhibition tour.

A few years ago Crossway Publishing had commissioned Mako to create original artwork for a Bible that was being published in conjunction with the 400th Anniversary of the King James Bible.  No modern artist had ever been commissioned to work alone on such a massive undertaking.  Mako felt it was an extraordinary honor to create the artwork.  He spent countless hours reading and rereading the Gospels for inspiration.  Over several years he painstakingly designed and executed the front cover of the Bible, the four evangelist’s gospel frontispieces, the illuminated initial chapter letters, and other embellishments and design elements of the book.

Seeing the picture entitled Charis-Kairos (The Tears of Christ) and listening as Mako explained how he had chosen the passage in John’s Gospel, Chapter 11 for the book’s cover, I was moved.  Not to tears, but to deep thought.  Mako read the verses in John about two sisters, Mary & Martha, mourning the death of Lazarus.  The women were bemoaning that if only Jesus had been there, Lazarus would not have died.  Verse 35 reads, “Jesus wept.”

Charis-Kairos (The Tears of Christ)

In my life, I am surrounded by lots of women. Emotional women.  I have three talented daughters and four accomplished sisters.  I have an insightful and beautiful wife, whom I love dearly. They all cry freely.  I cry also, but my daughters and sisters have rarely witnessed it.  I don’t often show my emotions the way they do.  Tears stream down my face when I hear or see something joyful or mournful. I cried when Tracy & I were married; I cried when our children were born.  I cried when my mother died and when I heard that Hugh Vander Plas was no longer with us.

Joy and sadness must not be that far apart.

In his lecture at UP gallery that night, Mako Fujimura elaborated on his year growing up as a Japanese American, his life in New York City, his career as an artist within sight of Ground Zero, and his feelings on The Four Gospels commission.  He also spoke eloquently about what John 11 meant to him:

“‘Jesus wept’ is both the shortest and, to me, the most profound passage in the Bible. I realize that his weeping is the purest sign of his humanity.  At the same time, as the Son of God, Jesus’ tears make no logical sense. He came to Bethany with the specific mission to raise Lazarus from the grave. He told the disciples his mission (and why he intentionally delayed his arrival, knowing that Lazarus lay dying) and revealed to Martha that he was and is the ‘Resurrection and the Life.’ So why did he, upon seeing the tears of Mary, waste his time weeping, when he could have shown his Godly power by wiping away every tear, telling people like her, ‘Ye of little faith, believe in me!’?”

“In my reflections, this ‘irrational,’ emotional response from Jesus became a central means to understand the role and even the necessity of art in the midst of suffering—what I have began to call our ‘Ground Zero’ conditions. Art, like the tears of Christ, may seem useless, ephemeral and ultimately wasteful. But even though they evaporate into our atmosphere, the extravagant tears of God dropped on the hardened, dry soils of Bethany, or onto the ashes of our Ground Zero conditions, are still present with us. Because tears are ephemeral, they can be enduring and even permanent, as with ‘Jesus wept.’ In the same way, perhaps our art can be so as well. What seems, at first, to be an irrational response to suffering may turn out, upon deep reflection, to be the most rational response of all.”

When I meditated on the picture, I could feel the flow of water and the power of grace as they wash over the falls.  It feels life-like to me, yet surreal.  The background is dark as death and the bright red, deep blue and gold punctuate from the darkness.  It reminds me less of Bethany and more of Gethsemane.  I can sense the struggles that Jesus must have endured in the garden that night.  I am drawn to his humanity as he pleads with his Father, “If it is possible, may this cup be taken from me. Yet not as I will, but as you will.” I can feel the humanity of Jesus as he wept for us.  I find it to be a very powerful set of images and emotions.

It is our pleasure to donate this limited edition print to the Murdock Trust.  It is signed by Mako.  Steve Moore and the “Murdock decoration committee” do not know where the print will stay permanently, though the staff says they have the perfect spot for it.

We encourage each of you at the Trust to spend time examining the picture for yourself.  See what you see.  Hear what you hear.  Feel what you feel in Mako’s work.  Tracy and I hope that this print will speak to you, inspire you, draw out your empathy, and motivate you.  The Trust has a future of important work ahead.  May this print call you to amazing grace (Charis) and to remarkable time (Kairos).

Do good work: the people of the Pacific Northwest are depending on you!

Makoto Fujimura, writing about his illustrations in The Four Gospels

I wrote for the Artist’s Introduction for the Four Gospels illuminated Bible:  From the Book of Kells (Irish, 9th century), to Limburg brothers (Duke of Berry’s Book of Hours, 15th century), to William Blake (18 – 19th century), past centuries have produced magnificent illumined manuscripts based on the Bible.  In contrast, the twentieth century saw a void in attempts to integrate the artistic gift with the text of the Bible.  In taking on this project, it is my bold and ambitious prayer that this new century will see a revisitation of the illuminated legacy, with the Bible as a source of creative inspiration and artistic expression, in both the East and the West.

Book Cover – Gospel of John – Charis-Kairos (The Tears of Christ)

Charis (Grace) Kairos (Time) takes the methods I developed for my Soliloquies series which exhibited my large scale works with Modernist master Georges Rouault’s paintings.  Taking Rouault’s indelible images as a cue, I decided to start with a dark background, to illumine the darkness with prismatic colors.

I write in the introduction to the Four Gospels‘ project by Crossway: “I painted the five large-scale images that illuminate this volume, The Four Holy Gospels, using water-based Nihonga materials (Japanese style painting), with my focus on the tears of Christ (John 11) – tears shed for the atrocities of the past century and for our present darkness.” 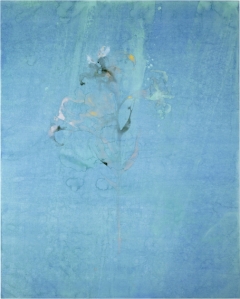 Gospel of Matthew – Consider the Lilies

Consider the Lilies is done with over sixty layers of finely pulverizes precious minerals (azurite and malachite), oyster shell white, and painted with sumi ink that has been cured for over a century, as well as gold and platinum powders, mixed with Hide glue (Japanese Sanzenbon, which is no longer being made), to adhere the minerals onto a hand-pulled Japanese paper.  The painting depicts Easter lilies, with triumvirate flowers opening up, but with the suggestion that even these common lilies are transformed into a post-Resurrection, generative reality.

“Consider the Lilies” will be printed by Rhino Press in New York City, to be released by Dillon Gallery starting later in April, 2011 as a limited edition (100) 32×26″ prints, hand touched by the artist with gold and platinum.  Please contact Dillon Gallery for more information.

Water Flames series depict the way in which flames not only consumes, but ultimately sanctify.  These works recall the visual language of the apocalyptic, moody paintings of the American artist Mark Rothko (1903-1970) – using Japanese vermillion, gold, platinum powders and cochineal (made from India’s dye made from an cochineal insect).  The work moves our gaze upward, even as we stand in the ever-expanding Ground Zero conditions of the world. 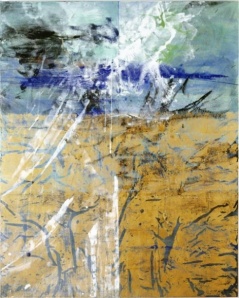 The title of this work, based on a well known tale of the lost son in Luke 15, is taken from my pastor Timothy Keller’s book, Prodigal God.  The visual complexity of the work depicts my own inner struggle between legalism of religion (the elder brother) and the “recklessly spendthrift” nature of the Father’s love in the story.  In the art world and culture in which we celebrate the wayward, but not having the language to bring the lost (myself included at times) back home, these series of works probe deeply into the tension that exist within my heart to love deeply – in spite of the legalism and the waywardness that prevails in the wider culture.

Gospels of John – In the Beginning

This work visually echoes the “Charis-Kairos” cover piece in the same way that the beginning of the Gospel of John echoes the beginning of Genesis.  The first chapter of the Gospel of John speaks not only about the origin of all creation in Jesus, but also about the mystery behind creation.  Art needs to inhabit such mysteries – to open us up to the generative reality of the deeper questions that lie behind our questions.

The portion of John – In the Beginning was done as a live performance, as part of an ongoing collaboration with Jazz percussionist/composer Susie Ibarra. 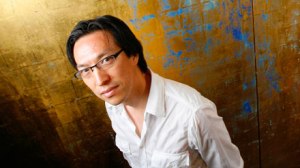 Mako Fujimura is an artist, writer, and speaker who is recognized worldwide as a cultural influencer by both faith-based and secular media. A Presidential appointee to the National Council on the Arts (2003-2009), Fujimura has contributed internationally as an advocate for the arts, speaking with decision makers and advising governmental policies on the arts.

Fujimura’s work is exhibited at galleries around the world, including Dillon Gallery (New York), Sato Museum (Tokyo), The Contemporary Museum of Tokyo, Tokyo National University of Fine Arts Museum and Oxford House, Taiku Place (Hong Kong). He has painted live on stage at New York’s legendary Carnegie Hall as part of an ongoing collaboration with composer and percussionist Susie Ibarra.

A popular speaker, he has lectured at numerous conferences and universities, including the Aspen Institute, Maryland Institute of Art, Yale, Princeton, University of Portland, the Q Conference, and IAM’s Encounter Conferences. IAM’s seminal 2000 conference at New York University called “The Return of Beauty” featured Dr. Elaine Scarry (“Beauty and Being Just”) and Dennis Donoghue (“Speaking of Beauty”).

Fujimura’s second book, Refractions: A Journey of Faith, Art and Culture, is a collection of essays bringing people of all backgrounds together in conversation and meditation on culture, art, and humanity. Fujimura founded the International Arts Movement in 1992.

Fujimura’s Curriculum Vitae are most impressive and extensive.  The list is constantly updated on his website under BIO: http://www.makotofujimura.com/