A mural in memory of George Floyd in Houston. He was known as Big Floyd.

We are sick to our stomachs and so sad about the state of racism in America. Atrocities continue today against all people of color. Blacks, in particular, fear for their lives in the streets, on the sidewalks, in the public parks of America. Everyone is asking what it means to be an American today? And how did we get to this point?

This witness post is a cry for a man whose voice was silenced unjustly. He has more things to say and more lessons for all of us who consider ourselves WOKE. We whites are more fragile than we think.

Although I would not say I am a Rev. Al Sharpton fan, I have had a change of heart. I was moved to tears this week by his impassioned eulogy for George Floyd. Rev. Sharpton called Floyd an “ordinary brother” from Houston’s housing projects who “nobody thought much about.”

People called him Perry, George and Big Floyd. How could this man with lots of nicknames, an ordinary brother from the projects, become a central figure in a generational movement, an apocalyptic moment for Black Lives Matter? He was no angel, after all. Didn’t his time in jail and a long rap sheet of run-ins with the law put an indelible stain on this brother? It’s time to say, NO!

There are many scenarios that could have changed the negative narrative in his life.

George Floyd, as the world now knows, died on May 25, 2020, after former police officer Derek Chauvin pressed his knee into Floyd’s neck for nearly nine minutes, during an arrest for an alleged counterfeit $20 bill.

Looking to find a thread of reason amidst the insanity swirling around the murder of George Floyd, Rev. Sharpton took the reality of Floyd’s life and the cruelty of his death, and re-framed the story: “When I stood at that spot (in Minneapolis), the reason it got to me is that George Floyd’s story has been the story of black folks. Because, ever since 401 years ago, the reason we could never be who we wanted and dreamed of being is you kept your knee on our neck.”

Sharpton continued the narrative as a metaphor for the African American experience, “What happened to Floyd happens every day in this country, in education, in health services and in every area of American life. It’s time to stand up in George’s name and say, ‘Get your knee off our necks!'”

“Your family is going to miss you, George. But your nation is going to always remember your name, because your neck was one that represents all of us. And how you suffered is how we all suffer,” Sharpton added. 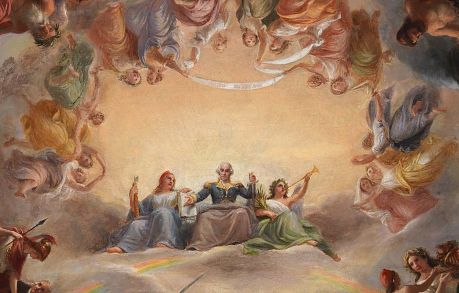 The Apotheosis of Washington, fresco in the Capitol Dome in DC.[2]

Yes, he died at the hands of the police. Yes, he was robbed of a full life. That said, was Big Floyd worthy of apotheosis? Like another George, George Washington, a resolute slave owner, finding a place in the heavens? The answer is a resounding: YES!

Rev. Sharpton, citing our clever, unifying God, finds the perfect analogy for why the Creator may have chosen Big Floyd for this moment in time: “God took the rejected stone and made him the cornerstone of a movement that’s going to change the whole, wide world.” With echoes of Isaiah and the Psalms, the less-than-perfect stone was used to build the Christian church on earth. [1]

George Floyd’s casket carried to a hearse after his funeral in Minneapolis. (AP Photo/Bebeto Matthews)

In front of a golden casket and flower bouquets, and against a backdrop of artwork depicting Floyd saying, “I can breathe now,” his brother, Philonise, shared memories of growing up together, eating banana mayonnaise sandwiches and sleeping in the same bed as kids. “All these people came to see my brother,” said Philonise. “And that’s amazing to me that he touched so many people’s hearts. Because he’s been touching our hearts (his whole life).”

“Everybody wants justice,” Philonise continued, referring to those who have been protesting in the streets of Minneapolis and around the world. “We want justice for George. He’s gonna get it!”

Millions have seen the vivid video recordings that captured Big Floyd’s final 8 minutes, 46 seconds and his final moments as a living Black man. Rev. Sharpton recalled George’s request, “You called for mama. We’re going to lay your body next to hers. But I know mama’s already embraced you, George. You fought a good fight. You kept the faith. You finished your course. Go on and get your rest now. Go on and see mama now. We’re going to fight on.”

Other speakers at the funeral made references to scriptures: Rep. Jackson Lee likened Floyd to the Biblical figures of Jesus and the prophet Isaiah. “We know that centuries ago, they took a man, with wicked men, put him on the cross. (They) did not understand that though they were intending wickedness, that out of much intention of wickedness came goodness,” said Rep Lee. “Your loved one, George Floyd, this secular world failed in its duty to intervene, failed in its duty to act, and failed in its duty to aid. But George Floyd answered the question in death when it was asked in Isaiah, ‘Who should I send?’ Oh, God have mercy on us. There was a tall man by the name of Big Floyd who stood up and said ‘send me.'”

Once again the biblical references seem apt and clear.

A man kneels, raising his fist, at a memorial for George Floyd, who died May 25, 2020 while in police custody in Minneapolis.

There was a large number of family, friends and prominent figures who gathered at The Fountain of Praise Church in Houston to celebrate George Floyd’s life. They spoke of his humor, his strength, his humanity. And they all issued a shout-out for justice.

The Fountain of Praise Church, Houston

The service had remarks by former Vice President Joe Biden, Rep. Al Green of Texas, Rep. Sheila Jackson Lee of Texas and Houston Mayor Sylvester Turner. Family members of other Black people killed by police were there, including Breonna Taylor, Michael Brown and Eric Garner, and attended as well. Actor Jamie Foxx was in the audience and R&B artist Ne-Yo performed a rendition of “It’s So Hard to Say Goodbye to Yesterday” by Boyz II Men. And, according to CNN, boxing champion Floyd Mayweather handled all of the expenses for Floyd’s funeral. [3]

The Floyd family members spoke about Perry as a “gentle giant,” and talked of his school days. Friends from high school and beyond fondly recalled his athletic prowess in football and basketball. Big Floyd’s funeral carriage was followed by a second carriage, which had two large football balloons and a poster with references to Jack Yates, 88, his high school football jersey number. His Yates team won the state football championship. Floyd was also a promising power forward on the basketball team.

Floyd was a huge role model among his peers, as his brother, Philonise Floyd, repeated during Monday’s visitation ceremony. “He was the first person who everybody looked up to in our neighborhood, because he was the first one to get a scholarship to go and play basketball or football, when he wanted to do.”

His younger brother, Rodney, said George Floyd was someone who also had a beautiful soul. “If he was told he would have to sacrifice his life to bring the world together, and knowing him, I know he would’ve did it.” Rodney added painfully that he’s still processing the death. “It seems unreal because, you know, every day is like waiting on that phone call. I’m still calling his phone number.”

Big Floyd, as was his wish, was laid to rest in a grave next to his mother. His legacy is still being written.

[1] The list of Bible verses that are the source of Sharpton’s words:

[2] The Apotheosis of Washington is the fresco painted by Greek-Italian artist Constantino Brumidi in 1865 and visible through the oculus of the dome in the rotunda of the United States Capitol Building in Washington, DC.