Professional athletes sustain them, amateurs get them, even little kids get them: Concussions. A person’s head hits the counter top, the floor or another head. Their brain hits against their skull and the shock results in a bleeding bruise in the brain. You can’t see a concussion without an MRI, but anyone who has had one knows that the after-effects can be crippling.

Getting concussed has become the source of indepth research, particularly for those who sustain multiple concussions in their lifetime. After my last Gran Mal (Tonic Clonic), I suffered a severe concussion when my head hit the floor. It was a doozy and I am still trying to get through it. My wife, Steph, has noticed that my mood swings are more violent since the blow to my head. I am noticing that I easily become aggravated with small irritations: things I cannot remember, TV remotes out of place, constant head pain. My mood swings seem much more erratic than in the past.

I asked my doctors at Hershey Hospital and my sister, Millie, about concussions and they all say that it can take six months to a year to get over that blow to my head. I had no idea is would take so long, which adds to my frustration. Post-concussion, the doctors have had me doing multiple therapies: exercises, relaxation, diet, daily monitoring. I have done well in my exercise treatment and in general they are pleased on how I have progressed.

Not all has been getting better, though. My health is still fragile. Last November, I ended up with pneumonia and that took me for a loop for a couple of weeks. Small setbacks seem to take longer to recover from than I remember in the past. And a couple of weeks seems like forever, especially when I am alone in the house most days.

My Neurologist has been monitoring my Neuropace implant and making adjustments six times a year, or every other month. Steph noticed that every time the doctors adjusted the volume of the implant (always increasing the intensity of the RNS neurostimulator), I sustained an immediate increase in the number of seizures. During the worst months my seizure count would spike up to 80, or nearly three per day. During the second month, they would settle back to average about 40 per month. After reviewing these patterns, my doctors have suggested that I have my implant looked at and adjusted every three months, instead of every other month. The doctors want to see how I respond to the new regime. 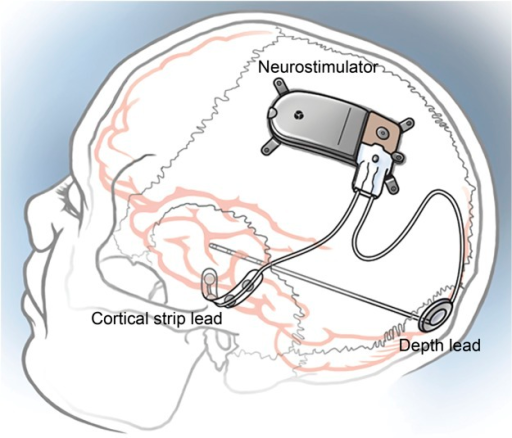 As to my agitation and aggravation, I am just starting to notice those sensations going away slowly. That is a plus for my mood and for Steph! I do not recall being so short tempered, moody and verbally angry in the past. It took me a few months to realize that I was acting out like a mean and nasty man, husband, parent and grandparent. Once I noticed the mood swings and my own intense irritation, I started working on it and trying to control that dark side of my personality. Steph says I am gradually getting back to my old self.

Speaking of Steph, she is a true love and joy in my life. I am so glad that we have each other. She is a phenominal wife and care giver. Being with her lifts my spirit every day. My step-son Curt is a great person as well. He comes around as often as he can. The bonus for me is that Curt’s two children, Skylar and Brooklynne, are so glad to see me. Both children look at me as their Grandfather, which warms my heart. Even, Brooklynne, the youngest, who is going through that phase in her “terrible two’s” is always excited when I am there visiting. She loves playing with me and telling me her stories. Skylar is 11 now and he loves some of our talks and time together, but to tell the truth, it is his Grandma Steph whom he really adores. They are both great kids and sources of endless joy in our lives.

I know I will get through this “concussion phase” as I have the other obstacles. I just want to thank Steph for her steadfast caregiving, and my doctors for listening to the small things, like mood swings, which have ripple effects on me and those in my pond.