This remarkable yellow flowering plant is an interesting member of the Mustard family. On the stalk, at any one time, can be found ripened and opened seed pods, fresh blooming flowers, and unopened buds. It has tall, stout stems that can reach up to five feet in height. The base of the stems are rather woody. This desert dweller differs from many plants in that it is tolerant of soils containing gypsum. It is also called Desert’s Plume and Golden Prince’s Plume and it is poisonous.

This is a naturalized but wide-spreading Spring annual. Its small flowers are different shades of blue and purple with some pink or white. The seed stems are twisted and if they are moistened and unwound, the pressure forces the seeds to pop out on the ground in all directions.

Most Sunflowers grow in open fields or along road-sides. They are tall, with rough, stout stems and course toothed leaves. The ray flowers are yellow or white and the seeds are important sources of food for the birds. The plants are annuals and re-spread their seeds each year to self-propagate.

The Cone Flower, also known as Echinacea, is a common plant along roadways and paths. It is a hardy plant that thrives in full sun and partial shade. Its seeds are a favorite with the finches and other birds with beaks which can harvest them in the fall.

The Clasping Cone Flower is more conical that the typical cone family and appears to be a cousin of the Black-Eyed Susan, except with a longer seed pod and shorter petals.

The state flower of Maryland, the Black-Eyed Susan, is a very late summer bloomer (which is why the winner of the Preakness Stakes’ May race at Pimlico receives a garland of yellow daisies painted black).

Gaillardia is a cross among many of the flowers we have just seen. It is also called Indian Blanket, Blanket Flower and Firewheel. Gaillardia is a beautiful and hardy version of these composites and it is found in unexpected places, high and low in the Life Zones, but primarily in the Lower Sonoran. The outer edges of the flower pedals are often yellow and the centers maroon or red, but the amount of yellow and red varies greatly by flower patch. 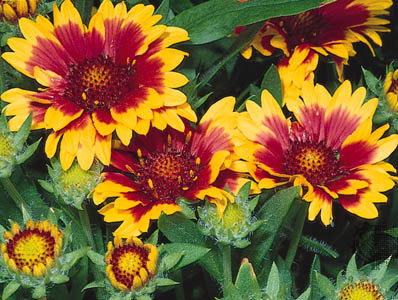 As I have heard said about the blanket flower, “The Divine painter has been careless with His brush, but lavish with His colors.”

One of the plants you see everywhere that makes you feel like you are in the West is sagebrush. It is a hardy plant that can withstand wind, floods, drought and nearly everything a desert can throw at you. It’s leaves are very fragrant and make for a great spice for soups and salads. The spring flowers are typically yellow and make the plant joyful, even in the desert. Sagebrush is the state flower of Nevada.