Foothills of the Rockies by Albert Bierstadt

Long strips of land between the plains and the mountains, the Transition Zones, are filled in with rough hills and valleys. Much of the sediment in the streams is gravel and weathered rock, washed down from higher land or left-over moraine from ancient glaciers. Total rainfall is higher than on the plains, and the broken character of the land provides protection from storms. Local conditions of sun, water and soil vary widely, but the primary native trees are yellow pine, scrub oak, juniper and sometimes aspen. Some people call these places in-between “Sagebrush & Greasewood” territory.

These beautiful little flowers are white petaled with green and white stamen. The flowers have four white petals but are predominantly green. The leaves are whorled, usually six in number. In the fall the fruit is in a cluster of red berries, just like what we find in the Dogwood trees. This flower, a miniature of the Pacific Dogwood, grows two to six inches tall and covers the floor of the forest.

In many otherwise barren areas this flower spreads its color in large patches, or hangs a single wand of bloom over the trail. It is a member of the Phlox family. The scarlet flowers are especially attractive to hummingbirds, which thrust their bills down the slender corolla tube. In the process the bird’s head becomes covered with pollen and when it hovers at the next flower, pollination is assured.

Commonly referred to as the Trumpet Creeper, or Trumpet Plant, this climber is a fast-growing, deciduous vine. It will grow more than 35 feet high under optimal conditions. Spreads of the vine range between 4 feet to 10 feet wide, with the Trumpet Vine’s reddish-orange flowers reaching bloom from late June to mid-July. It is found in shady areas in the Foothills, where there is good drainage. 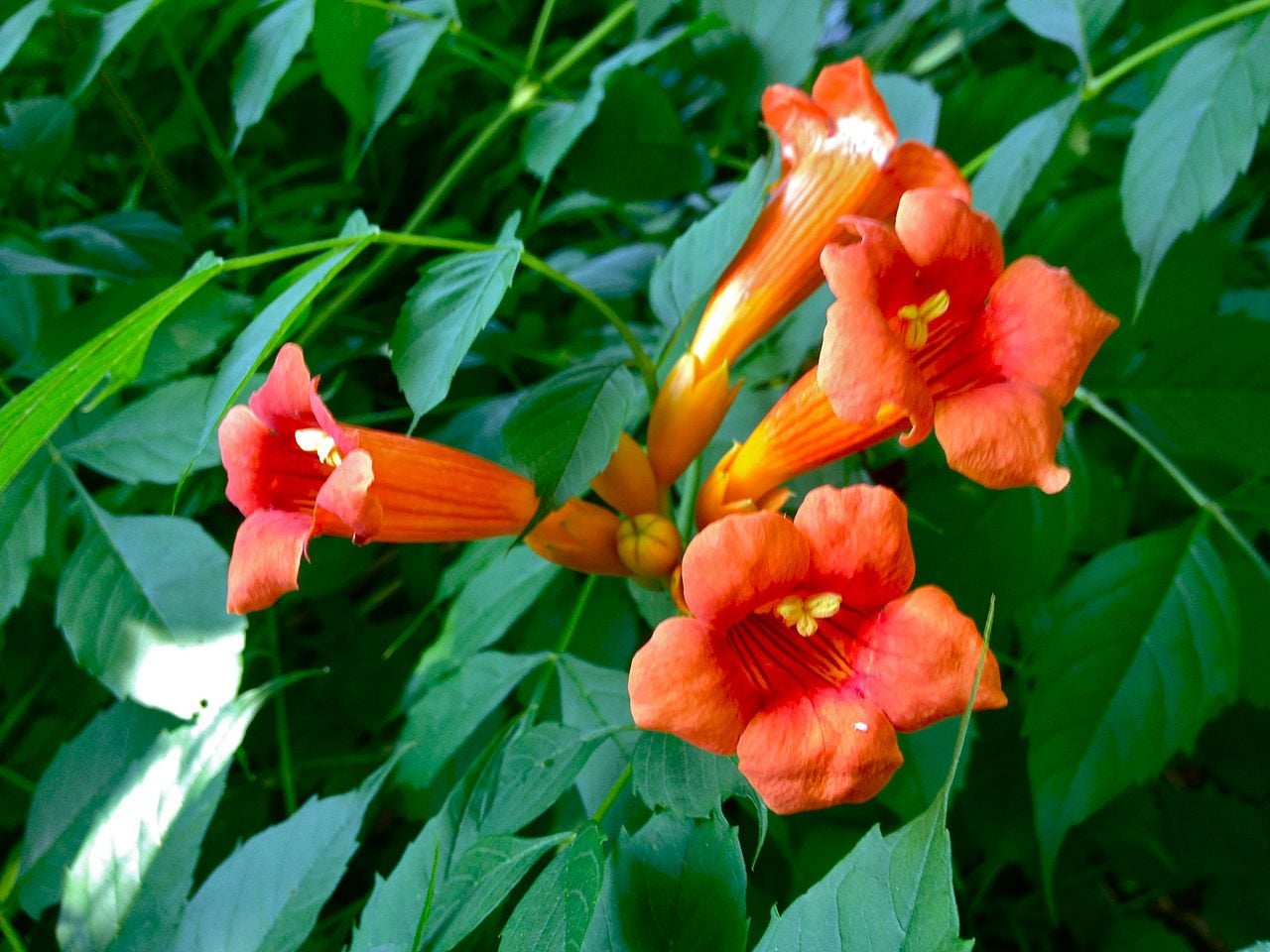 Anyone who has a vine like this at home knows that they need to be constantly pruned, or they can take over your garden wall, no matter the height.

This Morning Glory is no clinging vine, even though its flowers open on the coolness of dawn and close in the heat of the day. They grow in large clumps and appear to be bushes and will grow two feet tall with a four foot spread, or more, if they grow together with other bushes.

This common weed has the ability to charm and to strangle. The white and or pink or pale blue flowers are the charm, as they open each day in the cool of the dawn. In short order, though, it spreads along roadsides. If it spreads into cultivated fields, it can become a real pest to ranchers. This is an invasive plant that constricts the moisture flow of the plants they climb.

This is a lovely lily. It was chosen by Utah as the State Flower probably because if its important use by the early pioneers. The Mormons dug its root bulbs and ate them to supplement their meager diets during the early years of their settlement near the Great Salt Lake. Sago is a Native American word and this flower was sacred in the local tribes (The Ute) long before the settlers arrived in 1847. Lewis and Clark (1804-1806) wrote in their Journals about this lily. Sacagawea, their Shoshone Indian guide, dug the root bulbs and prepared them for the members of the Expedition more times than once. Wild game was scarce in their crossing of the Rockies and they needed vegetable nourishment to survive the trip.

There are a lot of other lilies of various sizes and colors and many of them are white, while others are hues of blue and yellow. One of the taller ones is the Mariposa Lily, which grows to 17″ and survives up to 10,000 feet in altitude. It is prevalent in grasslands, open woodlands, and semi-desert conditions. The word Mariposa means butterfly in Spanish.

These big, coarse plants, which you can see along roads and in culverts are very prickly. It could be mistaken for a thistle, if it were not for the flowers, which are amazing. The blooms look like big circles of tissue paper with a center of spun gold. It has the nickname of Cowboy’s Fried Egg, but it is known by many other names: Thorn Poppy, Yellow Poppy, Yellow Thistle, Bermuda Thistle, Bird-in-the-bush, Flowering Thistle, Gold Thistle of Peru, Jamaican Thistle, Mexican Prickly Poppy, Mexican Thistle, Prickly Pepper, Queen Thistle and Thistle-bush among others. 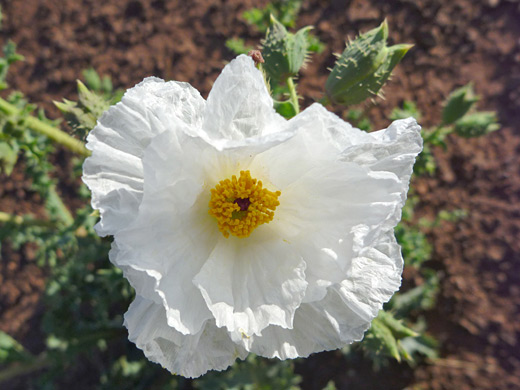 The plants are drought tolerant and resistant to hot sun. They are inhospitable to livestock and seem to follow them. When you spot a poppy patch it could be from overgrazing. The seeds contain a narcotic that is more potent than opium.

The nickname “Our Lord’s Candlestick” was given to this tall, conspicuous desert plant by the early Spanish padres. Others nicknamed it “Spanish Bayonet,” recalling their piercing rifle armament. The flowers look like drooping bells in the daytime, but spread to a total width of three inches when fully open in the late evening. The Native Americans make good use of every part of the plant: the fibers for sandals, the seeds for food, and the roots for soap and shampoo.

The delicate part of pollination of yucca is accomplished only by the deliberate work of the Pronuba moth.

There are several flowering plants with the common name Blazing Star, Liatris is one of them. It is also known as Gayfeather, the flowers are known for their long duration, up to a month, and straight stalks, which do well in arrangements. The bright flowers

The other Blazing Star are flowers that are covered with barbed hairs that cling to cloth. They have the feel of sandpaper. The flowers are very responsive to light. They remain tightly closed until about four in the afternoon, then spread into full bloom. In less than 20 minutes a colony of these plants can change the appearance of a hillside from weeds to a gorgeous display of yellow stars.

A member of the Sunflower family, the white Western Yarrow can be found in most parts of Western America. It grows to be 12 to 20 inches high, and the fern-like leaves, have a pungent odor when crushed. The Native Americans also call this squirrel tail, because the leaves resemble them. They have umbrella-shaped clusters of flowers, which are characteristic of the species and help identify the plant. There are hybridized varieties of yarrow that are shades of pink and yellow.

Since ancient times the plant has been highly regarded for its healing properties. Legend ascribes the discovery of this virtue to Achilles, in honor the plant’s Latin name is Achillea millefolium.

A prolific member of the Figwort family, the true Indian Paintbrush flowers are slender, two-lipped tubes of pale or greenish color about one inch long. They are surrounded and often completely hidden by the conspicuous brick-red modified leaves, which form a flower-like cluster at the upper ends of the stems. This is the state flower of Wyoming.

There are various sizes and shades of red and pink and yellow Indian Paintbrush at different elevations, proving how adaptable it is to different Life Zones.