“There are a lot of famous architects who either come from Finland or who are renowned for their buildings in Helsinki, but you really only have to remember three of them: Eliel Saarinen, Carl Engel, and Alvar Aalto.”

Or at least that is what I heard Aiden Barkley, our tour guide, as he barked above the street noises. We were bundled up and ventured out on our first walking tour of Helsinki. Recovering from jet-lag, I may have missed some of the finer points of Aiden’s lessons, but since I had heard of one of the architects, Eliel Saarinen, I was feeling smug. Eliel’s son, Eero Saarinen, had designed several buildings in Connecticut, including Morse and Styles, two residence halls, and Ingalls Rink at Yale University.

The hockey rink, nicknamed “the Yale Whale,” looked more like something Captain Ahab in Moby Dick was chasing, than a rink. And the Morse residential college was nearly always under construction for faulty heating and cooling systems, which left the central courtyard a quagmire of mud, backhoes and construction workers for most of the three years of our residency. Aero Saarinen may have been an architectural genius, but many of his buildings proved impractical in their final renditions.

That first day in Helsinki we walked to one of the center squares and viewed the Lutheran Church at the top of the hill: Helsinki Cathedral. This city icon and several others, were designed by another architect on Aiden’s ‘don’t forget’ list, Carl Engel. We went on to see a few more by Saarinen, Engel and Aalto before the day was over. 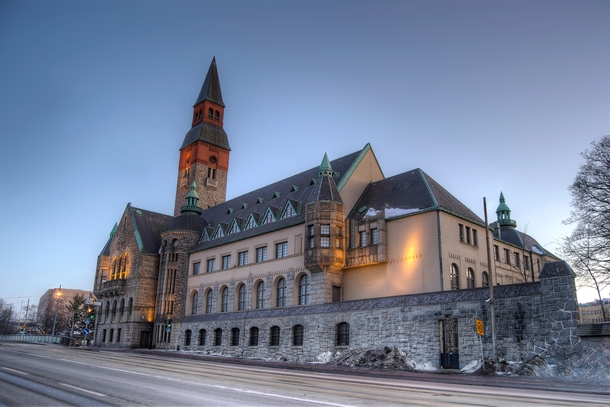 National Museum of Finland, designed by Lindgren and Saarinen

The next day, we were up close and personal with one of Alvar Aalto’s works, a building where we were meeting our first teacher and students for our trip, the Stora Enso World Headquarters.

Later on in the week Aiden Barkley reminded us that we had the chance to visit Alvar Aalto’s residence and workshop on the outskirts of Helsinki. I had never heard of him before the trip and the tour did not sound all that interesting. Even some of the other architects from Portland took a pass, indicating that they did not find his work as important as their architect professors had claimed it to be. Aiden Barkley said it would be well worth my time, and besides is was snowing off and on, so what else was I going to do? Reluctantly, I went on the tour of Alvar Aalto’s home and office. Being open to the tour proved transformational: we could hear the tenor of Aalto’s architectural voice.

The house tour was fascinating, as it had a very private, small door, small windows street presence and a wide open, multi-windowed back garden view. I loved the design elements! The chairs, lampshades, doors, windows, tables, vases, mullions, dressers, fireplaces, bricks, floors, cupboards, radiators and other fixtures were all simple and superbly complete. The house doubled as the office for the staff of the Alvar Aalto Foundation.

In the residence Aalto had a library and personal art collection, which included a wire sculpture by Alexander Calder. Alvar seemed to have been on a first name basis with some of the most famous artists of Europe at the time; and they exchanged their work as a form of barter: “If I could have one of your paintings or sculptures, I will give you one of my designs.”

After the house tour we walked up the street to the Aalto office for a second tour. Here the enormity of his work became apparent. The size of his his personal library was vast, and those were just for books about and/or written by Alvar Aalto. The displays had photographs and scale models of his famous works from around the world. The tables had squares and rulers, and other implements of the trade, sitting adjacent to news clippings and stories about the buildings. The full impact and breadth of his design touch became self-evident: he was and is a world-wide phenomenon. My ignorance was profound. 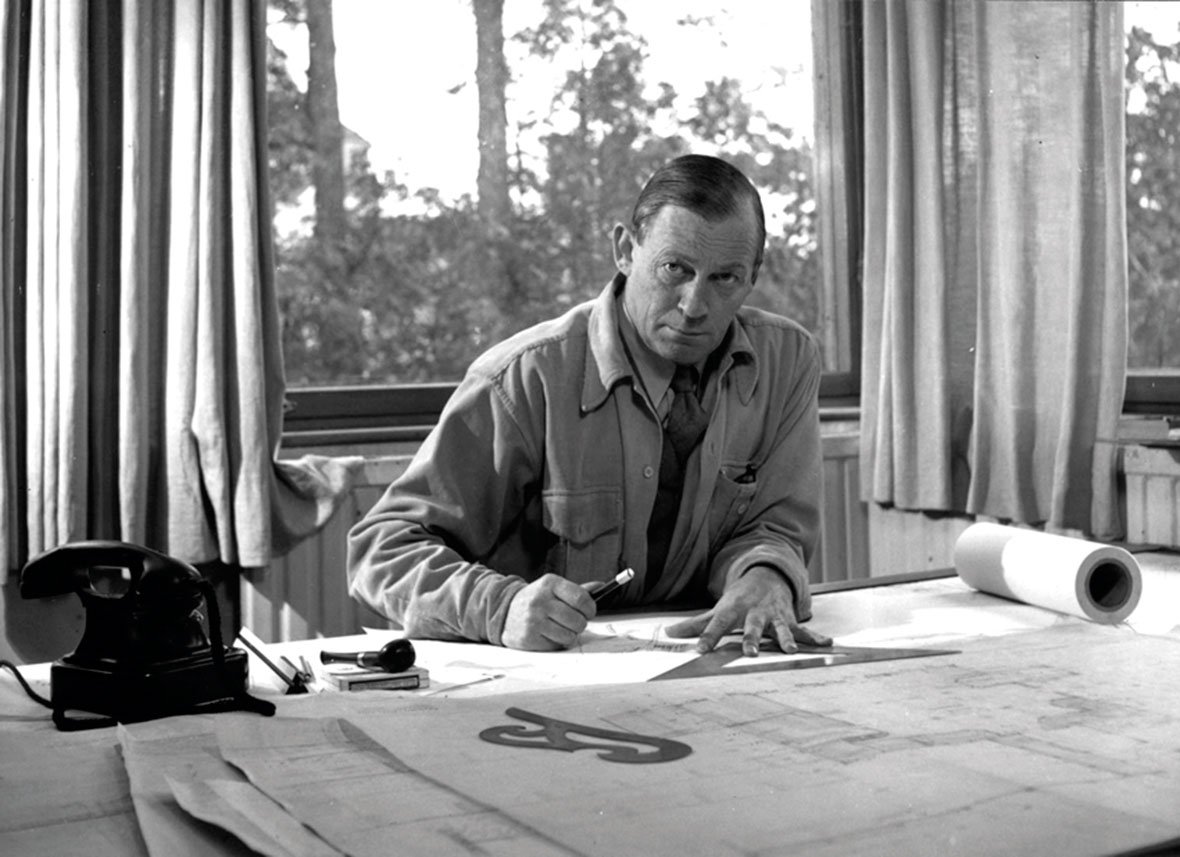 The next section of this Witness Post was inspired by a series of articles in the Aalto museum.[1] The articles talked about his passion and life-long vision for Finland, particularly Lapland, which was nearly burned to the ground and destroyed by the Russians in World War II. It is a jumping off point for what we might learn from his intense focus on the the city of Romaniemi, and the region of Lapland, to the betterment of the world as a whole. I will attempt to relate the lessons back to our work for Portland Public Schools and the state of Oregon.

To dream big, you often must start small. That is what Alvar Aalto did in the town of Rovaniemi. The capitol of Lapland, Rovaniemi sits on the Arctic Circle. For centuries, the city has been a central meeting point and trading place for the population in Northern Finland. Almost totally destroyed in World War II, Rovaniemi was rebuilt with a modern touch designed by Finnish architect Alvar Aalto, who devised the town plan to resemble a reindeer’s head and antlers. He described the model as an urban design resembling the human hand:

“From the chaotic urban pattern of old Rovaniemi, marked by black ruins, a center was formed according to the urban planning principle of a human hand placed on the map of the town. Symbolically one can say that a community was hereby formed, with the palm constituting a central park, and the fingers marking zones where traffic shall be located and the open spaces between fingers being parts of the town where housing and jobs are located. The Reindeer Antler Plan will be flexible enough in order to deal with unanticipated changes in all spatial functions. My Resiliency Principle is that basic structural solutions of the city have to be able to cope with all possible future changes. Main transport connections will be located in green corridors in order not to disturb the residential, administrative and business areas.” 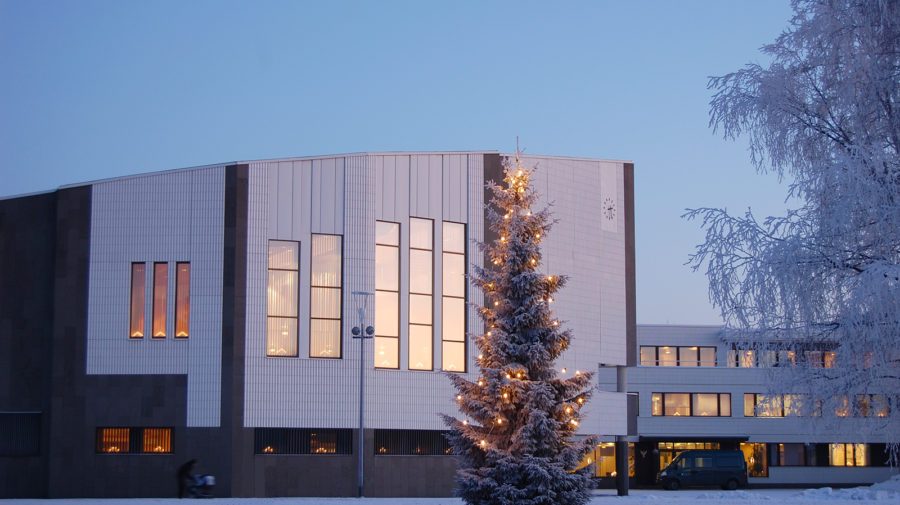 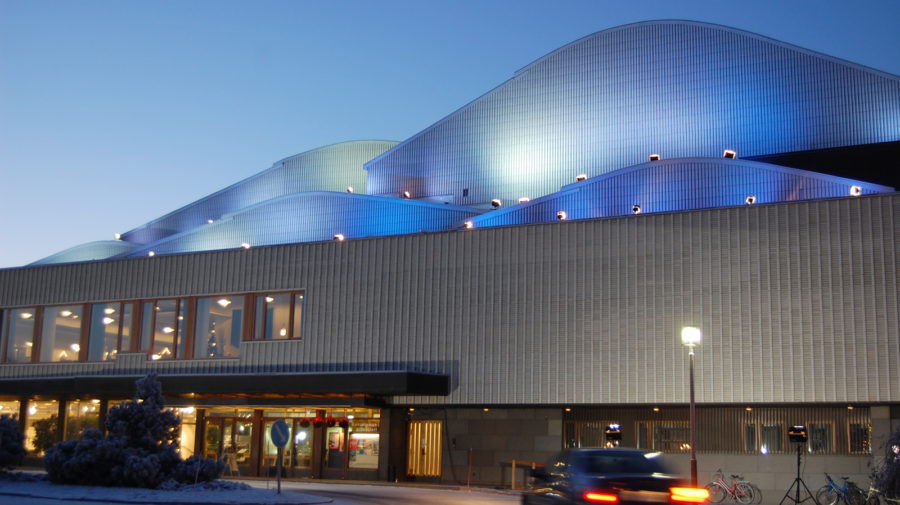 Lappia Hall in Rovaniemi, designed by Alvar Aalto as a theatre and town center

What was Aalto doing in the frigid North? Why should Portlanders care?

Aalto was developing a plan for the region of Lapland, not just the city of Romaniemi. With a total population of approximately 500,000 Lapland is close to the population of Portland.[2]  Aalto anticipated the resurgence of life to the Arctic Circle and the trade that would follow was critical to the region. The main livelihoods were from fishing, hunting, harvesting timber, mineral exploration, energy generation and tourism. Aalto was interested in integrating it all: the rivers, and the roads, and the businesses, and the schools, and the administrators, and the parks. He wanted to provide guidelines for the variety of governments the Laplanders embrace. He was not interested in regulations, he respected the individual municipalities’ rights.

“The plan will respect private ownership, but we can expect responsibility towards the community; a balance would bring the best possible solution for the common good. In other words, the plan aims at guidance not regulation.”

In Portland we are not fixing up the city after a war, but at the same time, there are some strong parallels for us to consider as we examine the regional work Aalto recommended for the people of Lapland. Portland has its challenges: we are on the banks of the once timber rich Columbia and Willamette Rivers, our primary energy is hydroelectric, our budgets are controlled by the power of our public employee pension plans – OPERS, we have a vibrant streak of independence and embrace weirdness, we have roads torn up for re-construction, we have dilapidated buildings in need of earth-quake proofing, we lack safe drinking water, we need radon abatement … the list goes on and on. As such, we need a comprehensive plan. We also need to find examples from other parts of the world as to how to navigate these challenges. Our reach is only limited by our beliefs. And even as we start small, we need to think big. We must be sure we are asking for far more than: “What do we do with a new Kellogg Middle School?”

Our considerations might include insights from our trip to Finland and answers to questions that we have about conditions in Portland today:

This list is incomplete but it will continue to evolve as we wrestle with the best ways to proceed for the sake of our schools.

What does this have to do with Lincoln High School? With PPS? With Oregon?

Our group visited Finland doing important thinking, vital planning and future preparation. We were purposefully inclusive of many voices, not just representing Lincoln High School and the three other schools in our district. We were architects, teachers, administrators, students, school board members and community activists. We traveled together to help develop a system of education construction that will work well into this century and the next.

The students we are teaching today will likely live beyond the year 2100 and it is incumbent upon us to build a better system for them and their grandchildren. Although the changes we recommend may not all come at once, come they must.

In many ways we are looking through the eyes of Alvar Aalto to see what his view would be of the best outcomes. One of greatest achievements might be to offer our readers a glimpse into what might be for us a better school system in Oregon and the Northwest.

[1] The text and content of articles by Jussi Rauti, courtesy of the Alvar Aalto Foundation.

[2] Population of Portland (640,000 as of 2016). Population of Lapland (500,000 as of 2011: including inhabitants of Finland, Sweden, Norway and Russia’s Kola Peninsula). Some websites show the native Saami population as 100K, and the Lapland-Finland population of 180K, but others include the Kola Peninsula as 350K, and areas bordering the White Sea and the Gulf of Bothnia. And, YES, there are about as many reindeer as people in the greater Lapland region.

P.S. Short Video from inside the offices of Alvar Aalto in Helsinki:  https://www.icloud.com/attachment/8