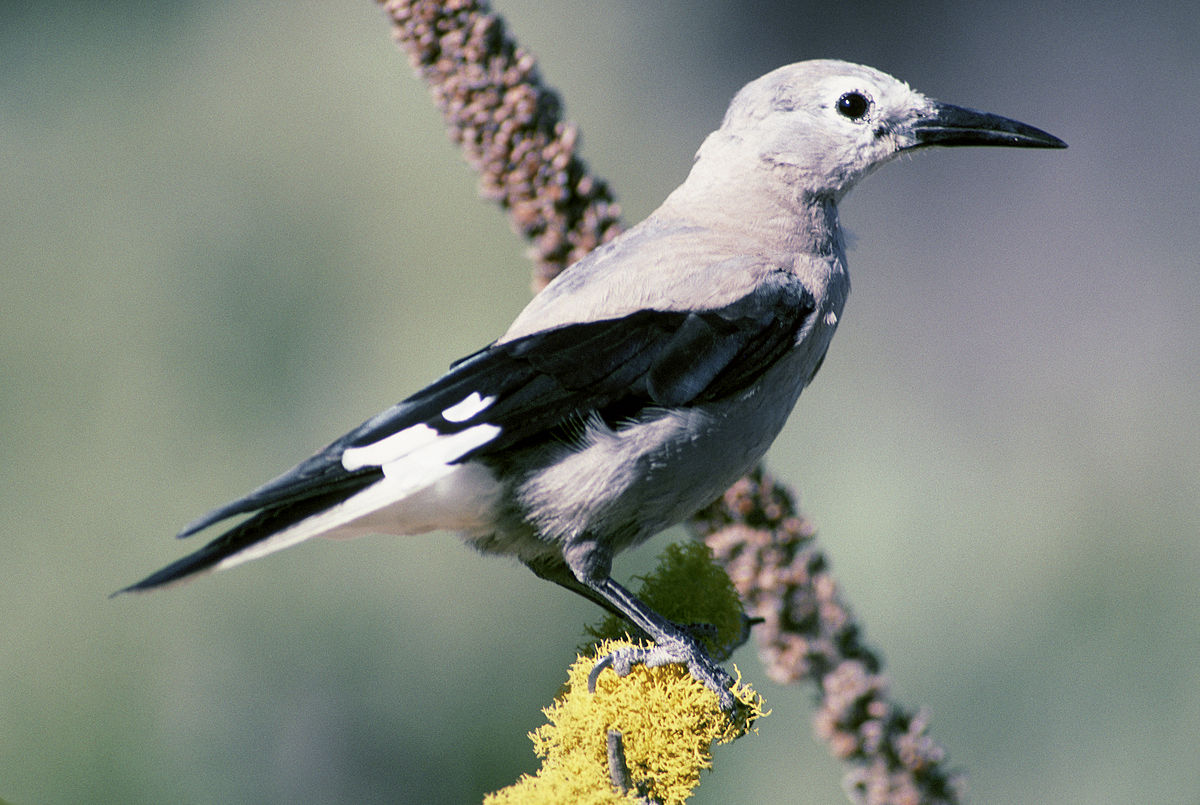 Clark’s Nutcracker, sometimes referred to as Clark’s crow or woodpecker crow, is a passerine bird in the Corvidae (crow) family.[1] It is slightly smaller than its Eurasian relative, the spotted nutcracker (below). 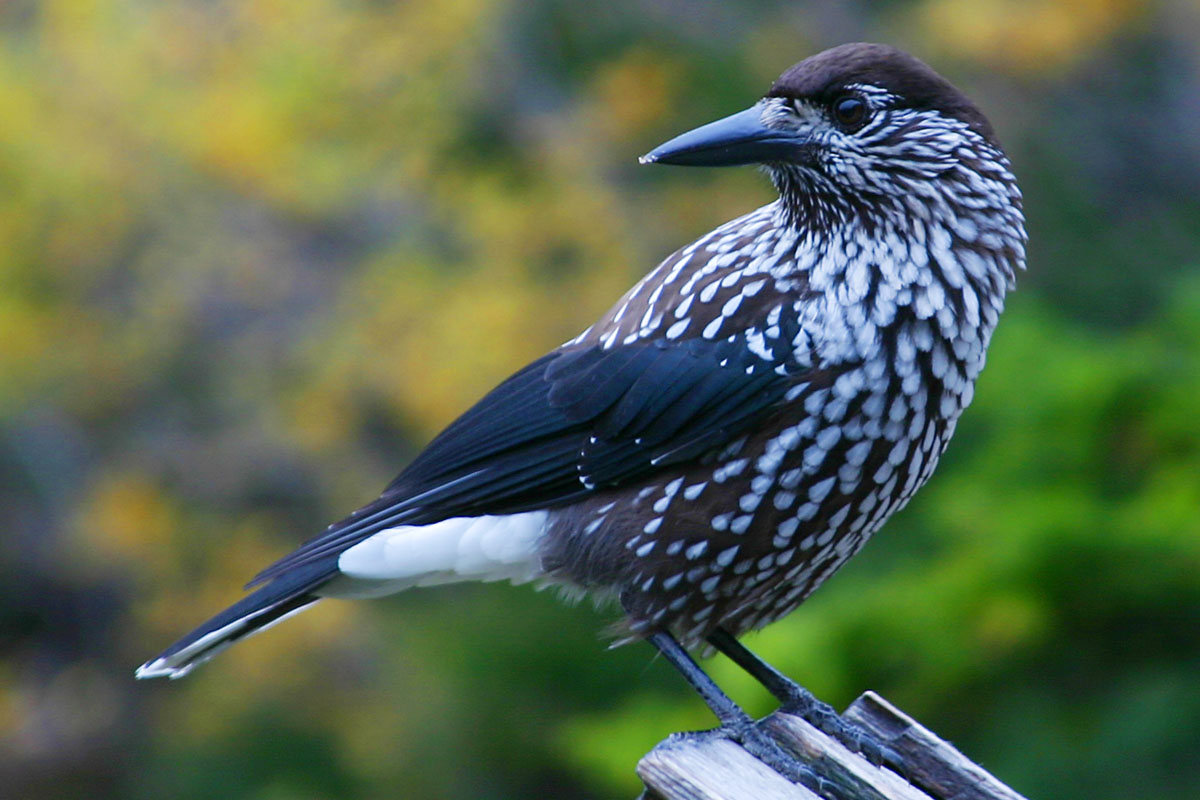 The Clark’s Nutcracker was first spotted and identified in 1805 by William Clark, co-leader of the Lewis & Clark Expeditions. He was struggling down a canyon on the Salmon River, challenging the theory that the Indians had said the river could not be floated safely in a canoe. On his trip he noticed a new bird:

“I saw to day [a] Bird of the woodpecker kind which fed on Pine burs it’s Bill and tale white the wings black every other part . . .”

Later on the same trip, co-leader Meriwether Lewis had time to study the habits and behaviors of this bird. His exploring party was waiting for the snow to thaw from a path through the Bitterroot Mountains. He wrote about nutcracker extensively in his journals, correcting some of the errors in Clark’s description:

“Since my arrival here I have killed several birds of the corvus genus of a kind found only in the rocky mountains and their neighbourhood. [It] has a loud squawling note something like the mewing of a cat. The beak of this bird is 1-1/2 inches long, is proportionably large, black and of the form which characterizes this genus. The upper exceeds the under chap [beak; properly, mandible] a little. The head and neck are also proportinably large. The eye full and reather prominent, the iris dark brown and puple black. It is about the size and somewhat the form of the Jaybird tho reather rounder or more full in the body. The tail is four and a half inches in length, composed of 12 feathers nearly the same length. The head neck and body of this bird are of a dove colour. The wings are black exccept the extremities of six large feathers occupying the middle joint of the wing which are white. The under disk of the wing is not of the shining or glossy black which marks its upper surface. The two feathers in the center of the tail are black as are the two adjacent feathers for half their width the ballance are of a pure white. The feet and legs are black and imbricated with wide scales. The nails are black and remarkably long and sharp, also much curved. It has four toes on each foot of which one is in the rear and three in front. The toes are long particularly that in the rear. This bird feeds on the seed of the pine and also on insects. It resides in the rocky mountains at all seasons of the year, and in many parts is the only bird to be found.”[2]

Perhaps this bird should have been named, Lewis’ Nutcracker!

Living high in the mountains of the West, gray-black-white Clark’s Nutcrackers are loud and conspicuous. They swoop like woodpeckers among wizened sub alpine trees, flashing “Look at Me” signs with their white tail and wing feathers. They use their dagger-like bills to rip into pine cones and pull out large seeds, which they stash in a pouch under their tongue and then carry away to bury somewhere for the winter. Each bird buries tens of thousands of seeds in the summer months and remembers the locations of most of them for harvesting in the winter. Seeds that they don’t retrieve play an important role in growing the new pine forests of the future.[1] 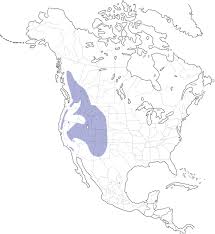 I remember seeing a photograph of a woman who was holding out her hand with a peanut clasped in her fingers. A Clark’s Nutcracker was in mid-air, taking the nut from the woman. The story is that the photographer had wanted this shot for years. He and his wife went to that promontory point many times each year to capture the perfect light and perfect timing. Eventually he and his wife divorced, though there is no indication it was because of the failed photo exercises. Eventually he remarried. The shot of a lifetime came a few years later with his second wife, who was captured in perfect harmony with the bird, the mid-air exchange and the surroundings.

Nutcrackers are beautiful, but nothing is worth sacrificing a relationship with the right spouse. Nothing can crack your nuts harder than a marital mistake … except maybe Tchaikovsky. 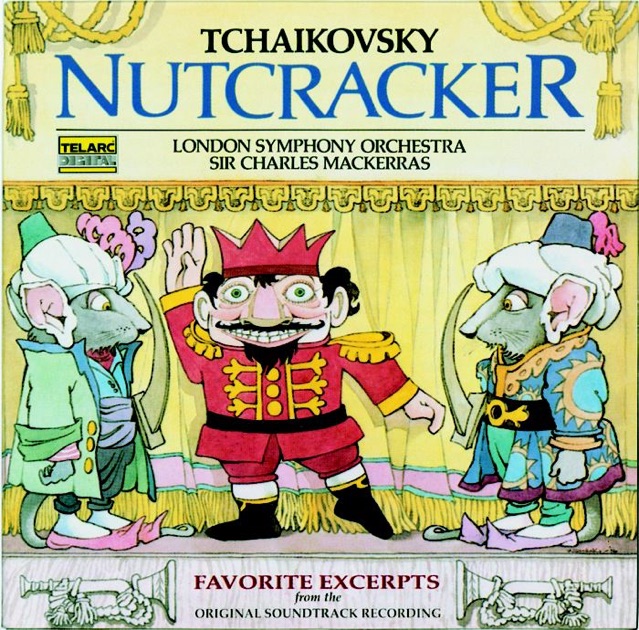