One of the most beautiful fliers in my memory bank is the Barn Swallow. Its colors and its grace are remarkable. I could watch them for hours. One of the images I have in my mind is a set of swallows flying below us, while we are on a bridge overlooking a stream in Rehoboth, Delaware. I imagine the the body of the swallow as it flashes those translucent tail feathers, ever-so-slightly altering direction and catching a bug in mid-flight.

Other images are of the swallows from underneath, while they show the rust color throats and their buff/white bellies, while cruising over the golf course in Gearhart, Oregon.

The prettiest image is also one of the dirtiest, as the nests of the barn swallows are mud daubs with droppings and mud drips all over the area below the nests. These are particularly dirty in barns, where farmers try to remove them, which may be one of the reasons that the species is on the decline.

One of the most easily identifiable, because of its white tail-patch on an otherwise green and violet backed bird.

Where the bank is the bed and nest for these beautiful fliers. Their nests are usually dug directly into the mud banks and not patched together with mud droplets. They are more drab than their cousin swallows, which makes them less flashy but more abundant, particularly along the streams in Colorado, where we have spotted them more frequently.

On swallow that seems a combination of the others in the species is the Cliff Swallow. It has the buff back of the barn swallows belly and the red of its throat, but it does not have the same tail and has what looks like a ring around its neck, which seem to be the most obvious markers. They build their nests under bridges and on cliffs with the mud technique of other swallows. Not to be confused with swallows are some spectacular birds that are often mis-identified with swallows. Purple Martins, for example, are larger than swallows, but their flight patterns and diets are very similar. 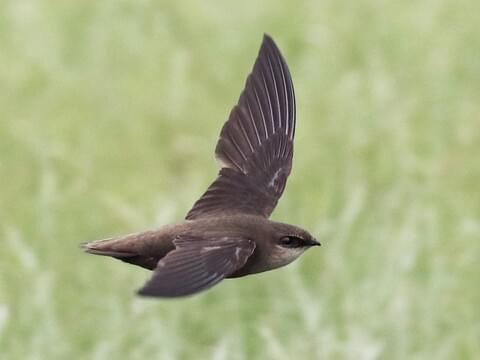 Swifts, on the other hand, have stubby bodies and seem to use their tails far less than either swifts or swallows. One ornithologist explained swifts as “cigars with wings,” which seems pretty apt. They do have forked tails, but it is harder to see the fork, particularly on the Chimney Swift and the Vaux Swift, which are common in Portland, Oregon.