One of the questions often asked of bird lover is, “What is your favorite bird?”  That is a very difficult question to answer truthfully, because there are so many birds. In all the world I have only seen a small subset of the species out there. Having heard about the fantastic rollers in Africa and macaws in South America and flycatchers in Borneo and seen photos of the thousands of migrating birds passing through Costa Rica, which is my favorite?  Having also dreamed of Tuis in New Zealand and the Jacana “Jesus Bird” in Australia, its time for a long-extended bird safari.  At one time, I had declared to Ellie Johnson, my parents’ dear friend, that the Hoopoe was my favorite bird, but even favorites can be fickle.  She had loved and studied the Hoopoe for many years and she lobbied that it was such a thoroughly beautiful and remarkable bird, it was solely worthy of everyone’s favorite.

For my wife, Tracy, the questions is easy: “You just have to love the Great Blue Heron…isn’t it just the best?” Of course I agree and say, “Yes,” but is it my favorite? 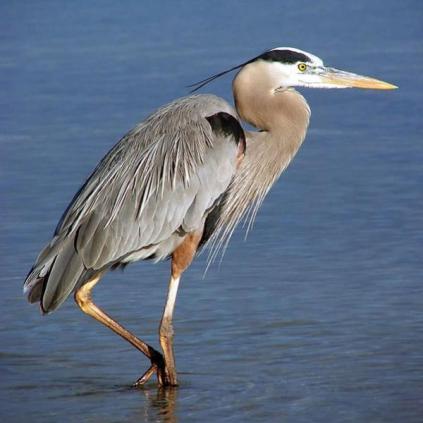 After an extended, thought-invoked pause, I find that I am drawn to a bird which I spotted in Southern Arizona many years ago.  It is called the Elegant Trogon and it is known for its bright red breast, saw tooth beak, green collar, white horizontal breast stripe, orange eye ring, and coppery tail.

The Elegant Trogon, (Trogon Elegans), was once dubbed the “Coppery-tailed” Trogon in all of the bird guidebooks. Only 40 – 50% of the adult males have coppery tails, but they all have an elegant red breast. Trogons are a “near passerine” species (or tree dwelling birds — like parrots, kingfishers, and toucans) in the family.  The Trogon family contains 39 species in all. I spotted both male and female Elegant Trogon in their nesting phase, while with the Cottonwood Gulch Expeditions in southeastern Arizona.  I was visiting an oasis, called Paradise, AZ in the remote Chiricahua Mountains.  We had driven south from Rustler Park to the Chiricahuas at the suggestion of our ornithologist friend, Arch McCallum, who had lived in Portal, Arizona for a time and had often seen the Trogons. Visiting our group was the geologist and birdwatcher, Jack Oviatt.  Together with avid birding campers Brian Malcolm and Tim Lord, we saw these magnificent birds. On that same outing we had the good fortune to identify Vermilion Flycatchers, Allen Hummingbirds, Painted Redstart, Sulphur-Bellied Flycatchers, Black-Headed Grosbeak, Scott’s Orioles and Gambel Quail, so to claim the Trogon as a favorite must mean it is an extraordinary find.

So, with equivocation aside, the Elegant Trogon is officially my favorite bird “of the moment.”  (It could be demoted to a lowers spot among favorites at any time by other birds.)

The territory of this momentary favorite is extensive, stretching from Arizona to Costa Rica, and it has been occasionally spotted in southeast and western Texas.  Besides the Chiricahuas, the Trogons have been spotted in the Santa Rita Mountains and several other ranges in Southern Arizona and Southwestern New Mexico.

The name Trogon, comes from the Greek for “nibbling or gnawing,” and refers to the bird’s beak, which has sharp, hack saw type upper mandible.  At the right angle the beak looks like a jagged edge.  The bird nests in tree cavities started and then abandoned by others.  They “gnaw” their own holes for extra space.  Their nests are high up in softwood trees located in tropical forests.  We spotted the nest in the upper trunk of an Arizona Sycamore, which had probably been dug originally by an Acorn Woodpecker, who abandoned it for other nesting locations.  The first nest may have been enlarged by Red-Shafted Flickers and fought over by the Trogon.  In this case the Trogon, especially the braggadocios male, is a good fighter and won.

The bird looks like an ancient invader from Mexico.  It must have been prized for its feathers as the plumage would look great adorning the headdress of a Mayan King.  The male Trogons have such distinctive feather patterns that are pleasing to the eye.  At the same time they have this annoying, scratchy-throated squawk.  Guidebooks say it is “a croaking ‘co-ah co-ah co-ah’” accompanied by some indistinguishable chattering notes.  Brian Malcolm said the call sounded like a barking dog being chased by an angry cat.  Despite its vibrant colors, we first located the bird by its unusual call. 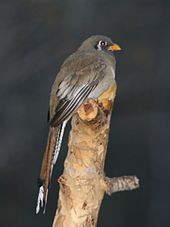 The female Elegant Trogon is much more subdued than her mate.  She has a metallic bronze head, upper breast, back, upper tail and upper-wing coverts. She shows a dull white upper belly, white tail feathers, and a small white vertical stripe behind her eye. Her tail is less coppery than her male counterpart. The Trogons usually lays a clutch of two to four white or pastel eggs each breeding season.  Males and females both take part in keeping the eggs warm during incubation, which starts when the last egg is laid.  Once out of the shell, the chicks are fed insects for about 30 days when they typically fledge.

Front of the Male Elegant Trogon

Elegant Trogons feed on insects and fruit, often taken in mid-flight. They are also known to forage for lizards and small reptiles. Their broad bills and weak legs reflect their diet and arboreal habits. Although they fly pretty fast, they do not fly great distances, seeming reluctant to spend too much time aloft. The do not migrate very far in their range and typically perch upright and motionless on tree branches. Some of the species make smaller migratory movements, particularly mountain species, which move to lower altitudes during different seasons. This migration pattern was demonstrated using radio tracking in the Resplendent Quetzal in Costa Rica.  There may be more evidence for a number of other species migrating as well.

The Trogon has some other behaviors which resemble owls: they can turn their heads 180 degrees.  As a bird watcher it is often frustrating to see that this sedentary bird is almost always pointing the opposite direction, as if he purposely wants you to see his back and coppery tail and not his front.  When I first spotted the Trogon, I knelt down and focused my binoculars on his back.  I gave a loud whistle and slowly he turned his head toward me exposing the glittering green of his back, then the red/orange of his breast, and the gray of his wings. The white breast markings were great at providing color contrast. He turned his head from side to side and kept his an eye on the bird watchers nearly all the time. If the male Elegant Trogon is fully facing you, the red color on his breast is astonishing, demanding a salute.  Even the gaudy Painted Redstart stands at attention.

For comparison, below are photos of other gaudy birds, clockwise from the top left (Painted Redstart, Vermilion Flycatcher, Gambel Quail, Allen Hummingbird).

Trogons are found on four continents (North America, South America, Africa, and Asia) and are believed to be an ancient family.  There are some According to Wikipedia, the fossil record of Trogons date back nearly 50 million years ago to the mid-Eocene era.  The birds are linked with Quetzals, which have always been revered for centuries for their colorful feathers.

The Trogon and the Body of Christ

One particular research item caught my ear.  It became an important part of my reason to write about this bird and no others.  It has its roots in the daily and weekly worship we celebrate as Catholics: the Eucharist.  In the Roman Rite Missal, it is stated this way.  At the Last Supper Jesus instructs his apostles to:

Take this, all of you, and eat of it:

for this is my body which will be given up for you.

Take this, all of you, and drink from it:

for this is the chalice of my blood,

the blood of the new and eternal covenant.

which will be poured out for you and for many

for the forgiveness of sins .

Do this in memory of me. 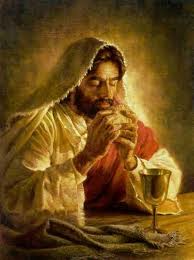 It is the reference in the Eucharist to eating the body of Christ that got my attention.  The request from Jesus is one of his last commands to his disciples. The Greek word for EAT in the Catholic tradition is TROGON.  It is as if God wants us to gnaw, like the Elegant Trogon, on his flesh and drink his blood.  But are we to eat in a different way than typically understood for nourishment?  We are called at the Last Supper to “Do this in memory of me.”  I have often found the symbolic repetition of the meal to be soothing and comforting.  Yes, it is meant to be a new covenant with his people, but what are we eating?  How are we to gnaw on it? And why? 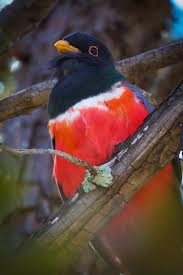 One of the things I wanted to understand is what the name of the bird (Trogon) and the request of Jesus (eat of it) may have in common.  I have not come very far in my research, but I find that there is some interesting food for thought (pun intended) in the exercise.  I will have pray about this matter to see if there are some deeper meanings that I am missing in the name of the bird and the Command of our Lord in the Eucharist.