The Portland Business Journal held its May 12, 2017 Power Breakfast at the Nines Hotel near Pioneer Square. Cool digs. Business executives and want-to-be’s were there to hear James Curleigh as the featured speak. One of the few to be invited to speak a second time at the monthly breakfast, Curleigh had been asked before, when he was the president of Portland based Keen Footwear. He is now the president of Levi Strauss, based in San Francisco.

James Curleigh with students from Lincoln High School. Students were guests of Morones Analytics at Portland Business Journal May Breakfast.

“I still have a house in Portland and feel my family grew up here, so I have a special place in my heart for Portland. And, by the way, its a happening town. It has the hip factor.” Curleigh took a moment before the power breakfast began to mingle with the attendees. He came up to the table where Lincoln High Students were seated and he engaged with them fully. “One of the highlights of my time in Portland was to win the honor of being the ‘Principal for the Day at Lincoln.’ We were neighbors with Peyton Chapman and Laurie Kelley, which was a bonus. I have fond memories of the place and know that my kids would be at Lincoln if we still lived in Portland.”

James Curleigh with James McGee and students from Lincoln High School. Students were guests of Pendergast Realty at the breakfast.

Advice for executives on the rise? “Act as if this is the last job you will ever have,” shouted Curleigh, known as “JC.” Although he has had a remarkable string of advertising and marketing successes, he insists that this is a motto he learned from his father. “Dad gave me this book, after college, just as I was moving to Europe…The book was used to prop up a table for months. Then, when Dad asked about the advice in the book, I finally opened it. Number one on the list of top places to work in Europe was M&M Mars. So I decided to apply. Soon after I was astonished to speak to the head of the European equivalent of HR. I had moved from the prospect list to the POTENTIAL employee list. Somehow, luck I guess, I got a job and I treated it as if it were the last job I would ever have.”

JC worked diligently for the Snickers brand, which has different names in different countries. M&M had no global presence at that time. It was, and still is, a privately held candy bar company. Then things changed. The president wanted the company to stretch beyond M&M’s local candy bar roots. “I suggested that Snickers sponsor the Winter Olympics.” The boldness was just what the company needed. It landed a position not as the official candy bar for the games, but the official Snack Food. The marketing move proved to be the global stamp of approval that M&M Mars was looking for to go beyond regional status to become a worldwide brand.

“As I look back on it, M&M Mars and the Olympics were at an intersection for me, and when you come to an intersection, you need to take advantage of it.” While skiing with some Salomon sportwear executives at the Olympics, we struck up a conversation. They liked me and we stayed in touch.” After some time at TaylorMade Adidas golf division in Europe, JC was invited by Salomon to move to Utah to become the head of the sports division for North America. He took the job because he loved the product and treated it as the last job he’d ever have.

“Out of the blue, I got a call from Rory Fuerst from Keen. He wanted to meet me in Portland at 5:30am at the ACE Hotel.” Saying he really was rarely up before dawn, JC agreed to the meeting and was given 20 minutes to talk. They postponed the rest of the meeting until after dinner that night and JC was offered the job of President at Keen. He loved the culture and the growth potential. The challenges were many, but the days were always rewarding.

Keen grew very quickly and expanded from a single outlet to being distributed in over 1,000 locations worldwide. After a string of successes, JC was invited to Washington, DC, to be honored at the White House by President Obama. In a casual conversation with Obama, he was asked about the role of government and business. JC remarked, “The role of government should be to turn the obstacle course of regulation into an opportunity course for success.” At the press conference less than an hour later, Obama used the same expression in his own words.

Always seen in Levi’s, even at the White House, Curleigh was invited to move from Keen to Levi Strauss. He arrived in 2012 and was surprised at the culture there. After asking if employees felt as if Levi’s best days were ahead of them or behind them, JC was astounded to learn that the majority felt the best days were behind them. “I felt like I was joining a start-up, only it was 150 years old!” Curleigh consulted with Nike’s Mark Parker to talk about the role of innovation at a global brand. “He gave me a crash course on balancing icons and brands.” With attacks on the jean market from every flank — premium brands, private label brands, teen brands, uniglobe brands, and more –“I was on a collision course with reality.”

“I developed a theme which we call, ‘Protect the Core and Innovate for More,'” said Curleigh. And in the process he learned to be aggressively patient. The notion of taking a larger share in the denim market is one thing, however, Curleigh wanted Levi’s to take a larger share of the entire closet and the lifestyle clothing of its customers. “Levi’s was cool…once…but we had lost a whole generation.” They were buying True Religion, Aeropostal, Hollister, Hot Topic, Gap and other brands, but not the tried and true 501’s. The innovation thread had to be rewoven into the cloth of Levi’s and Curleigh was patiently persistent on it’s importance to the survival and thriving of the enterprise.

Levi’s has expanded its focus and reach to belts, shirts, jackets, underwear, socks, casual wear, you name it. “We have yet to gain the share of closet we want to hold. That’s what makes it so exciting.” Innovation is not just a concept. There are projects coming together with Google and Apple that make Curleigh confident that Levi’s will have the first wearable innovation product coming out this year. Stay tuned. 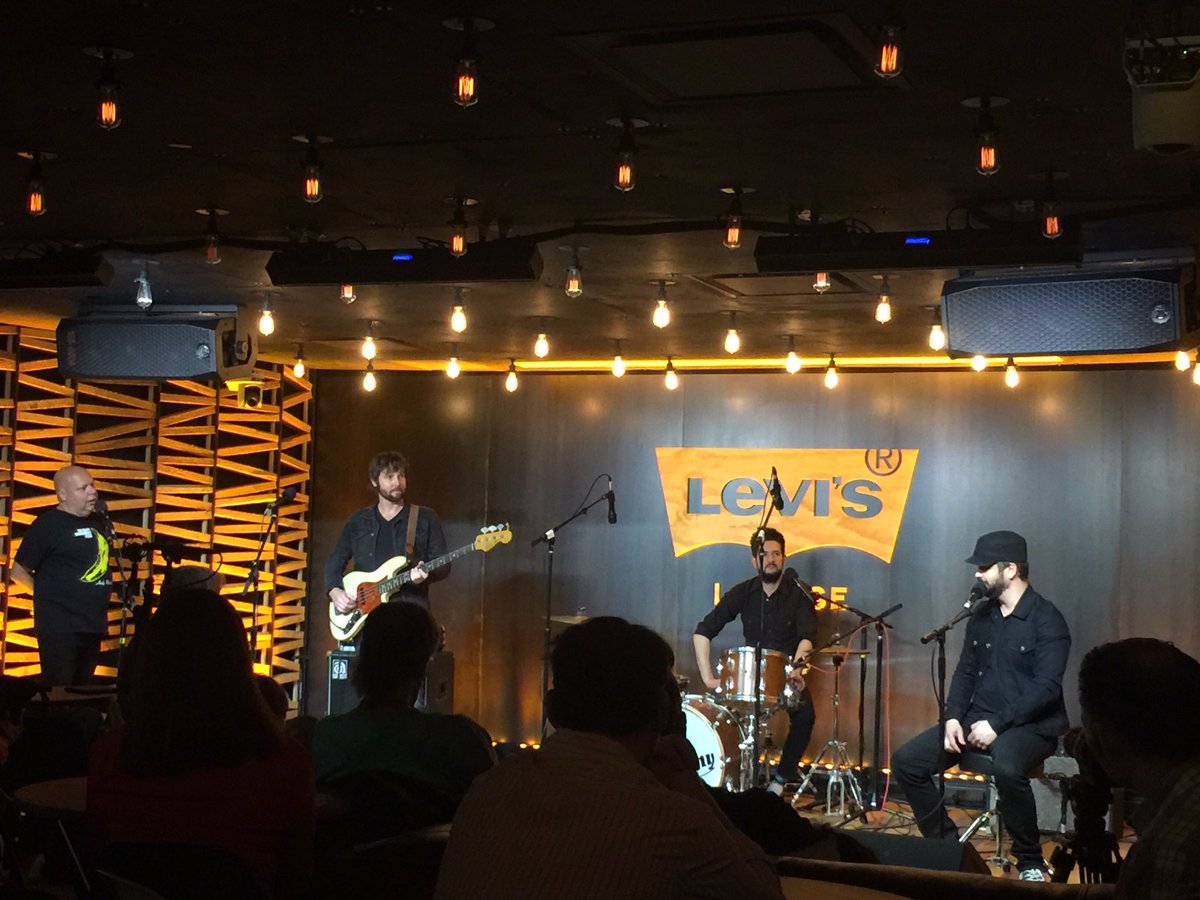 Levi’s has also connected with the thriving rock & roll culture to connect music with jeans. From Bruce Springstein to John Mayer, from The Who to Beyonce, Curleigh wants the connection between their clothing and their concerts. Instead of a musician green room, the Levi Lounge in San Francisco has a “blue room” in honor of the jeans’ predominant color.

The biggest marketing effort that Levi Strauss has ever executed was the naming of the new stadium in Santa Clara. With the well documented problems of swirling winds and poor weather at San Francisco’s Candlestick Park, the team wanted to move a few miles south toward San Jose. They chose the peninsula sunshine of Santa Clara. Curleigh seized the opportunity to name the stadium. The traditional sports venue is also the place for rock concerts, soccer games, corporate dinners and the like.

Levi Stadium in Santa Clara, CA, home of the 49’ers

To the tune of $220 million for 20 years, it is by far the largest branding the company had considered in its life. As one of the most iconic brands in the world, Curleigh insists, “You have to be high-end aspirational in business.” His leadership style challenges the status quo and demand more from everyone, starting at the top. “These days the conditions for success call for brands to be simple on the front and sophisticated on the back.”

“I was watching a game with the 49’ers one day and got fixated on the pants of the team’s mascot, Sour Dough Sam. He was NOT wearing Levi’s! How was that possible?” In short order Curleigh made sure that every outfit of the 49’ers mascot included a perfectly fitting pair of Levi’s. “Our company started during the Gold Rush, so we had to be the brand of choice of gold digging Sour Dough Sam, right?”

Curleigh is watching out for the various channel choices of Levi customers, with direct to consumer expected to be about half of the sales. “We want to keep our fans in Levi’s no matter where they buy them.” Mobile devices, Amazon Prime, Nordstrom’s and Levi stores are all channels that Curleigh feels will thrive. “We have about $5 billion in worldwide sales…we can grow, as Nike did, to $20 billion.” Curleigh knows the key is to stay connected and listen to the customers, of all ages.

Lived In? It’s no longer in the past tense

Levi’s has a reputation as the number one selling pair of jeans at ‘used clothing’ stores. Curleigh intends to change that dynamic. As he stated, “You can wear other jeans, but you live in Levi’s!” Keep your eyes out for Levi’s to stay hip and relevant to the next generation of jeans wearers, while staying comfortable for the gold miners who brought them here.

In October, 2018, James Curleigh was appointed the President and CEO of the iconic musical instrument company, Gibson. His marketing prowess will once again be put to the test. Stay tuned. He will be playing from the old song book, but the chords will be full of soul. Just what you would expect from the next act for JC.