Q: How would you describe the relationship between the Democrats and Republicans in the US Government?

A: Vituperative to the max!

A reporter on the BBC called the tension between the parties, Vituperative, and getting worse. Interesting word choice. According to wiktionary, vituperative means: marked by harsh spoken or written abuse; abusive, often accompanied by ranting and railing. Synonyms include abusive, censorious, invective, ranting, scolding. The root of the word comes from Latin, which makes it sound imperious and condescending. If the Democrats and Republicans were to use a word with roots in Saxon to describe the members across the aisle, they would probably call each other “shit heads.”

The last time the Government shut down the way it did at Midnight, September 30, 2013 was on November 14, 1995. On that date my wife, Tracy, and I drove to the Willard Hotel and stayed overnight, while the Federal Government struggled through furloughs, critical personnel-only drills, and the mayhem that the halted money flow caused. There were no federal employees at the Willard that night, so we could not engage in Old Time lobbying. Instead we watched Tom Hanks in Apollo 13 and had a great nights rest. The rest of Washington simmered and froze with the hot flashes of temper and the cold blanket of snow. It is amazing how peaceful and quiet the White House lawn can appear, with a fresh dusting of that white stuff. 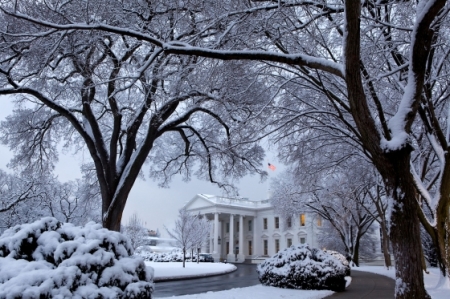 Thank you, Suzon Cameron, for babysitting for us and for offering the gift of “a night at the Willard” those many years ago. We were hoping we would never see another shut down. Our hopes were dashed.

Our latest hope is that the Parties do their jobs and bring us back from the hostile, unproductive brink. There is real work to do and this country deserves better.