As an early teen and camper with the Cottonwood Gulch Expeditions in New Mexico, I was introduced to one of the meanest looking reptiles in the desert. Called the Chuckwalla, it looked ferocious. Little did I know that it was all just for show and that our counselor, Roy Barnes, liked to take his wards to far off mesas to spot the reptiles at play.

Barnes would awaken us before dawn, get us to make our own sandwich lunches, and drive us at sunrise on bumpy, dusty roads to far off mesas. We tried to sleep enroute, but that was hopeless. Once parked, we would set off in all directions with our grubby fingers and quick reflexes, looking for lizards and snakes. He was a careful herpetologist: he was there to teach us about all of the species. He particularly loved the poisonous ones (rattlers and Gila Monsters) and wanted us safe. But since he knew the territory, we were more likely to find an Eastern Fence Lizard or Bull Snake instead.

One day Roy spotted one of his favorites and he took us on a chase. It was a big and fat chuckwalla and that reptile put the UG in the word ugly. I thought he called it a chuckawalla, but he corrected me about removing the extra A from the middle and saying the name right.

Living primarily in arid regions of the southwestern US and northern Mexico, there are six species of chuckwallas; all are in the genus Sauromalus. They are part of the iguana family: Iguanidae.[1] It was dark and big and menacing, at least it was to my fourteen year old prepubescent self.

Chuckwallas are stocky lizards, with wide-bodies, flattened midsections, prominent bellies and wrinkly, sagging, scaley skin. They look like the type of reptile which would give warts to anyone who touched it. Their tails are thick and sometimes taper to a blunt tip. Other times it looks like the tail was cut off and reattached by a blind surgeon. Their bodies, from snout to tail, measure to about 15 inches are so, though some are known to measure to 30 inches San Esteban Island (Sauromalus varius).[2]

The male chuckwallas having reddish-pink to orange, yellow, or light gray bodies and black heads, shoulders, and limbs, while the females and juveniles have bodies with scattered spots or contrasting bands of light and dark in shades of gray or yellow. Males are generally larger than females and possess well-developed what are called femoral pores. These pores are located on the inner sides of their thighs and they produce secretions that scientist believe play a role in marking territory.[3]

Chuckwallas are not as mean as they appear. In fact they are scaredy-cats. Harmless to humans, they are known to run from potential threats. When we tried to catch one, the male chuckwalla scampered off and wedged himself into a tight rock crevice. There he inflated his lungs and belly so that it was impossible to dislodge.[4] 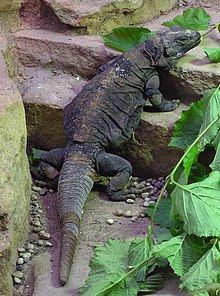 Males are both seasonally and conditionally territorial. When there is an abundance of food, water, and good climate, they tend to create a hierarchy based on size: big boys get the girls. Chuckwallas seem use a lot of territorial displays to attract females and to mark their turf. They can exhibit a combination of colors, they can prove their athletic prowess (do “push-ups” and head bobbing), and, like a Maori warrior, they can show open mouth gapes and tongues out to defend their territory.[5]

Since chuckwallas, like other reptiles, are active only during the day, they spend much of their mornings warming their bodies and basking in the sun. Winter days, when they are not hibernating, they spend nearly all of their time trying to get warm and stay that way. These lizards are well adapted to hot summer desert conditions: they are active at temperatures up to 100°F. Juveniles emerge first, then adults, as temperatures reach around 90°F.[6]

Mating calls with these lizards occur from April to July. The female bares from five to 16 eggs laid between June and August. The eggs typically hatch in late September. Chuckwallas have relatively long life spans, sometimes surviving for 25 years or more.

While I was with the Cottonwood Gulch, we spotted chuckwallas in the Sonoran Desert, but it is also populous in the Mojave Deserts, the Four Corner area, California and Baja.  They always seem to be found on rocky mesas and lava flows. They seem to abound in those arid areas, where only the creosote bush and cactus thrive. The lizard seems to like elevations below 4,500 feet.

The one chuckwalla we captured and brought to base camp for observation was a king of the lounge lizards. He would sit in his terrarium with fruit and lettuce all around. He dined whenever he wanted. He seemed to enjoy insects, flowers, vegetables. He ate it all. When we released him, he was big and fat, too large to fit under the typical mesa shelf. In hindsight we did him a dietary disservice.

[4] We tried to pull one male chuckwalla out of its hiding spot for an hour and gave up because it was too firmly wedged to capture safely. His back may have been scraped, but not as severely as our knuckles.