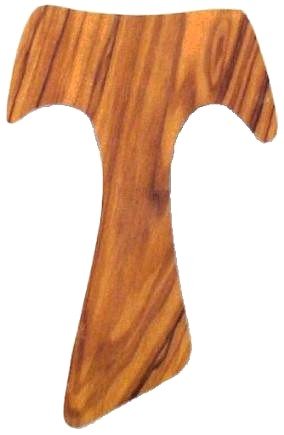 Tales from the Camino: Tau

In July of 2017 we came upon images of a tilted T that was painted or engraved on some shrines and graves in northern Spain. The French women, Marie Claude, who was walking with us, said that the T was actually the sign of St. Francis, who is the patron saint of Italy. What? We were on the Camino of Santiago (St. James) in Spain so what is another saint doing all over this territory?  Don’t they have some separation of all of these saints or something?

Tau or TAV is the last letter of the Hebrew alphabet and the letter was used symbolically in the Old Testament. It was used significantly in the Book of Ezekiel: “The Lord said to him, ‘Go through the city, through Jerusalem, and put a mark upon the foreheads of the men who sigh and groan over the abominations’” (Ez. 9:4). The Tau is that mark that the Hebrews placed upon the foreheads of the poor people of Israel, and it ultimately saves them from extermination.

In Christian traditions the Tau has several explanations and reasons to persist. First, the notion of the last letter in the alphabet (Omega in Greek) is the equivalent in symbolism to Tau (the last letter in Hebrew). Omega appears in the Book of Revelation: “I am the Alpha and the Omega, the beginning and the end. To the thirsty I will give water without price from the fountain of the water of life … I am the Alpha and the Omega, the first and the last, the beginning and the end” (Rev. 21:6; 22:13). The early Christians adopted the letter Tau, because its form reminded them of the Cross on which Christ was hung and died for the salvation of the world.

What is the Tau Not?

The symbol of St. Francis “The Tau” is many things and it is NOT other things. First it is not a magic amulet. It is neither a fetish, nor a trinket. Nor is it a charm that is hung on a chain around someone’s neck to “bring good luck.”

What is the Tau?

The Tau is a concrete sign of Christian devotion. It is a symbol representing the commitment of one’s life to following the poor and honoring the crucified Christ. It is a sign of the awareness of a Christian life that shields us from the evils that appear everywhere in the secular world.  It is a sign willed by God to protect us, it is a divine privilege (Rev.9:4; Rev.7:1-4; Rev.14:1). From the Old Testament, it is the sign of the Lord’s redeeming power, the glory of the unblemished, of those who trust in Him, of those who see themselves as beloved children and who know that they are precious children in the eyes of God (Ez.9:6).

The Tau is a symbol of the dignity of the children of God, for it is the Cross that held Christ. It is a sign that reminds people that Christ stressed that they must be strong in times of trial. It is a call for all believers to be ready to obey the Father, and docile in submission, as Jesus was docile before the will of God the Father.

So, where does St. Francis come into play?

Because of the resemblance of the Tau to the cross of Jesus Christ, but also it’s differences, this outward symbol was very dear to St. Francis of Assisi. He did not feel worthy of dying as Christ did on the cross, yet, while he was alive, Francis felt the symbol occupied an important place in his life. The Tau was an ancient, prophetic sign that held saving power. And St. Francis felt that symbolism must be expressed through the beatitude of poverty. The poor are essential participants in the Franciscan way of life.

“Whenever necessity or charity required, St. Francis marked with this seal the letters he sent” (FF 980); “He began all of his actions with it” (FF 1347). The Tau was, therefore, the sign dearest to Francis, his seal, the telltale sign of a deep spiritual conviction that the salvation of every man is only in the Cross of Christ. 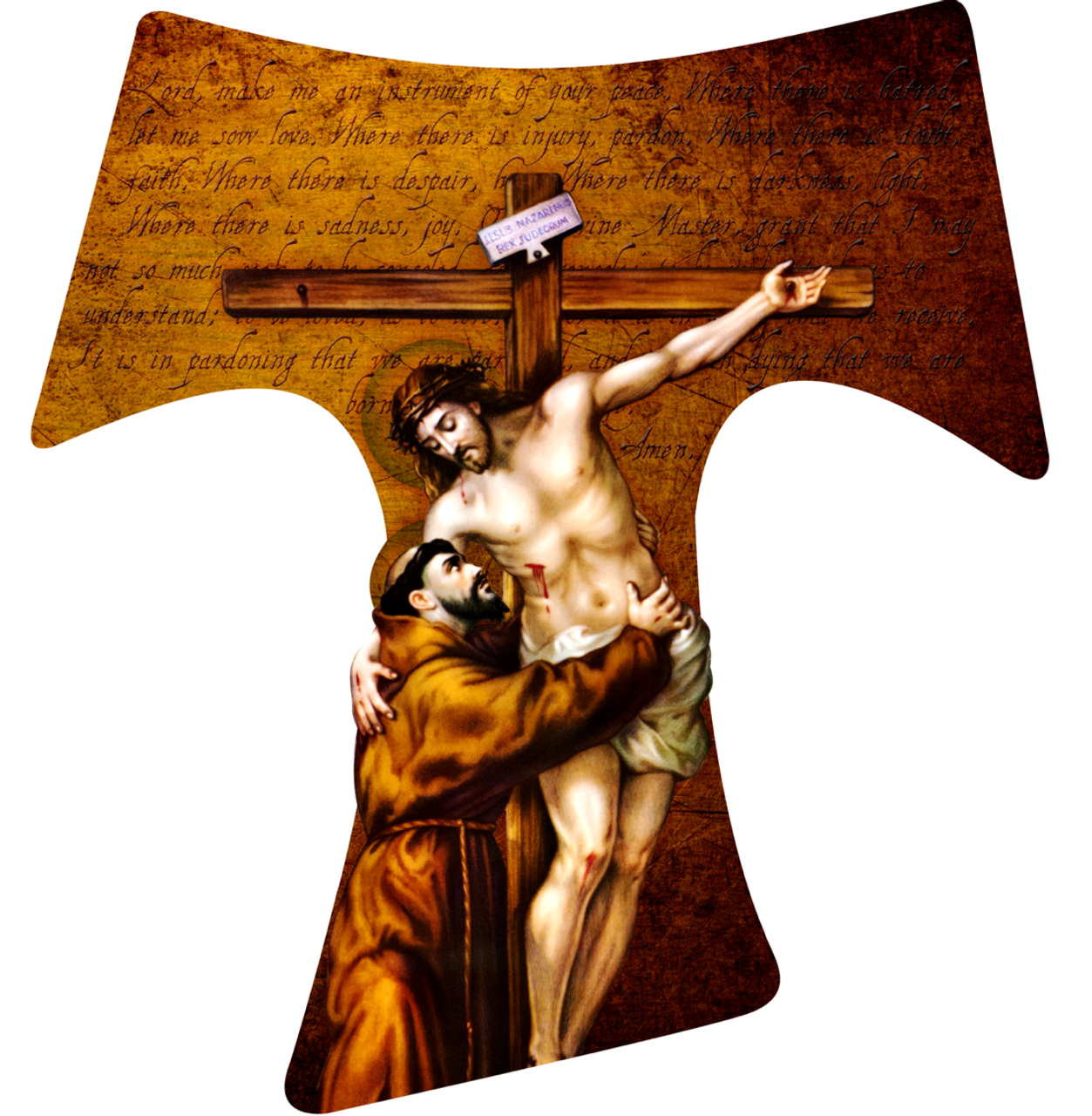 The symbol of the Tau was received by St. Francis for its spiritual value. The Saint of Assisi took hold of this sign in a manner so complete and intense that, at the end of his life, and through the stigmata impressed in his flesh, he became the living image of the Tau. St. Francis is often painted on the Tau as a beautiful symbol of the closeness he felt with Jesus through contemplation and love of the poor, who held an important part of his heart. 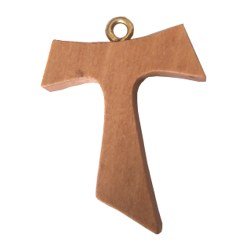 Why is the Tau Symbol Made of Wood?

We often think that crosses should be durable and made from precious metals like Sterling silver or gold. St. Francis, though, felt differently. Wood has always been a very inexpensive and flexible material. Francis believed that the children of God are called to live simply and in poverty of spirit (Mt.5:3). As many craftsmen know, wood is a material that is easily crafted, cut, chipped, molded and polished. And the belief is that the human spirit of the baptized Christian must also be shaped and molded by their every day life in the world.

The Tau can be seen as a herald of the Gospel: it is a call for honor and support of the poor in our communities.