The Adventures of Huckleberry Finn has been among my favorite stories since re-reading it in college. The novel was part of an American Studies class under the gentle hand of Professor Sydney Ahlstrom at Yale [2].

Instead of exploring the text as a childhood adventure story, the Twain novel came alive as an allegory for many important American themes: independence, faith, family, adventure, prophesy, racism, slavery and education. Professor Ahlstrom clarified some hidden meanings of the book in ways that were astonishing. Like a preacher “cracking open the word” of sacred text, Ahlstrom read Twain’s language aloud to class and he explained its meaning, in detail. The vernacular, which was hard to fully grasp, became crystal clear as he told the stories of the different religious and cultural traditions that had shaped American thought at that time. Unable to replicate his depth, I will channel my inner-Ahlstrom to highlight a few of the pieces from my memory bank.

Twain dubs Huck as “the juvenile pariah of the village,” and describes him as “idle, and lawless, and vulgar, and bad,” qualities for which his friends in the village admire him. But Twain admits that the mothers of Huck’s friends “cordially hated and dreaded” him.

Raft on the Mississippi River near Hannibal, MO

In the first chapter of the novel, Widow Douglas adopts Huck Finn and takes him into her home. She is a strict, old guardian who treats Huck as her son, believing that she can educate and “sivilize” him. She whacks him on the head with her thimble, frequently scolding his behavior, and preaches to him from the Bible. She does allow him to use snuff, because she is partial to it as well; however, smoking, drinking and cursing are off limits. 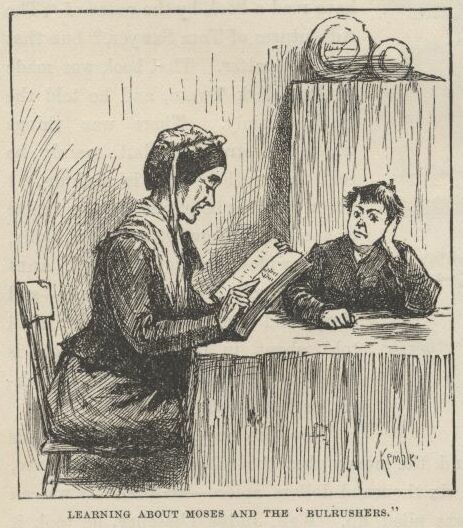 Illustration by E.W. Kemble from the first edition of The Adventures of Huckleberry Finn [4]

Widow Douglas most wants to give Huck a fear of God. One telling passage is when she reads to Huck from the Good Book [Exodus 2:1-10]:

After supper she got out her book and learned me about Moses and the Bulrushers, and I was in a sweat to find out all about him; but by and by she let it out that Moses had been dead a considerable long time; so then I didn’t care no more about him, because I don’t take no stock in dead people. [5]

Despite his protestations about not taking stock in dead people, Huck’s life becomes the story of “Moses and the Bulrushers.” It is a powerful metaphor of adventure and self-discovery. The Widow is reading a prophesy about her lost child. The parallels are striking. Moses floats in the Nile River, Huck floats down the Mississippi. The wife of the Pharaoh discovers Moses in the bulrushes and raises him as one of her own. Slave Jim raises Huck on the river journey and Huck is born to a new life upon his return to St. Petersburg. Moses leads his people out of bondage in Egypt to the Promised Land. Huck takes Jim from slavery, and with the help of Tom Sawyer’s Aunt Polly, leads him to a new life as a free man. Moses becomes an outcast and never enters the new Israel, Huck is a pariah among his villagers and leaves Missouri for Indian Country.

The Widow’s prophesy comes to life on the river.

Most of the tale follows Twain’s two misfit escapees (slave, Jim, and vagabond, Huck) through a humid gauntlet of adventure. Jim does not have a last name, but he has the power of skills, instincts, love, courage and fortitude that his white masters lack. Jim and Huck flee their island hideout on a raft, when the authorities discover that Huck has faked his own death and Jim has run off to avoid being sold to another slaveholder. The fantastic story flows from the “legal” escape from an abusive father and the “illegal” escape from slavery. The duo hide during the day and run the Mississippi River by night. Along the way they run into every sort of rogue, rascal and grifter a young boy could imagine. Jim can sense evil in other men’s hearts and is a trustworthy guardian.

Image of a boat similar to Jim and Huck’s [6]

Huck, despite missing any formal education from school, is an archetypal innocent boy. He picks up enough spelling and reading from Widow Douglas’ sister, Miss Watson, to get by and he thinks about right and wrong. He may not have attended Sunday school either, but he keenly discovers the “right thing to do” despite the Bible thumping around him. He is an independent thinker, especially around slave ownership, which was the prejudiced right of the whites in the South at that era. Twain does not moralize about the topic, yet Jim is a powerful reminder of the basic human rights for all people in the Utopian America. One example of young Huck’s moral compass is his decision to help Jim escape slavery, even though he believes he will go to hell for it.

Another interesting female character in the novel is Tom Sawyer’s Aunt Polly. She calls Huck Finn a “poor motherless thing.” In the prequel story to Huckleberry Finn, The Adventures of Tom Sawyer, Huck confesses to Tom that he didn’t feel motherless. He remembers his mother distinctly. But mostly he remembers his alcoholic Pap. His father yelled at his Mom a lot and his parents were relentlessly fighting. The fights only stopped with her death. Justifiably, he feels that he raised himself without the comfort and support of a mother for many years.

Image of Jim and Huck on the river [7]

The maternal Aunt Polly is a loving woman, but often shows her affection by being stern with Tom Sawyer. In one episode Aunt Polly receives a letter from her sister, Sally Phelps, stating that Tom’s younger brother, Sid, had arrived safely with Tom at the Phelps’s house. Knowing that Sid was at home with her, Aunt Polly became suspicious. She wrote Sally two letters asking her to explain what she meant by Sid arriving with Tom. When Aunt Polly received no written response, she traveled to the Phelps plantation to find out the truth. Aunt Polly smugly uncovered Tom’s tricks: Huck was hiding out with the Phelps family, as Tom, and Tom was playing Sid. Huck describes Aunt Polly as “looking as sweet and contented as an angel half-full of pie,” when she uncovered the ruse.

A key reason to include Aunt Polly in the story is that she helped secure Jim from a sure return to slavery. She was able to confirm, as a valid witness, that Jim, the former slave being held at the Phelps plantation, was actually a legally free man. Without Aunt Polly’s positive identification, no one would have believed Tom, who had proven himself untrustworthy. Her confirmation prevented Jim from being sold to a new slave owner.

The maternal relationships with Miss Watson, Mrs. Phelps, Widow Douglas, and Aunt Polly are overshadowed by the influence Jim has on Huck’s life. It was their time together on the river that becomes the most enduring and powerful. On the river Jim senses the wickedness of other men and women and he protects the young man from their treachery. He comes up with the plan to navigate the rivers, and to land in free territory, when they hit the Ohio. Unfortunately, fog descends on the river and the two miss the mouth of the Ohio to freedom. Instead they return to St. Petersburg, only to discover that the corpse in their island hideout is Huck’s father, Pap Finn. Jim risked his freedom for Huck, what an act of love he showed!

The lyrics of the story, as read to the class by Professor Ahlstrom, still sound as urgent to my ear as they did back in the day. Trips down and upriver, or across the ocean, can be transformative. As Mark Twain predicts:

Twenty years from now you will be more disappointed by the things you didn’t do than by the ones you did do.

So throw off the bowlines. Sail away from the safe harbor. Catch the trade winds in your sails.