Dark times lead to dark thoughts. Depression, death, destruction. A snow storm blew through Portland this week. The stong winds took down many trees in the Park Blocks that had flourished for decades. In a several hour period the branches were laden with a foot of snow and could not bear the weight. The branches of the strong trees came tumbling down, the stumps of the weak trees shattered in rotten explosions. Yellow and red police barrier tape kept pedestrians away from the danger.

Walking through the wreckage it seemed impossible that life would return to those trees.  The ice was thick, the rubble was enormous, and the temperature would stay below freezing for days. It is still winter. Yet, the roots are deep. It is possible that come spring a shoot could emerge from one of those stumps and bring new life to these blocks.

And so it is with all lives with deep roots. After times of dormancy and decay, storms and havoc, hope springs eternal.

What might this metaphor be leading us to know about a message from the Divine? How should we read these arboreal images in the light of today’s confusion and misunderstandings? Perhaps we should pause and take some time with the words of Isaiah from the Old Testament. Listen to the prophet and see what ideas spring forth:

1 And there shall come forth a rod out of the stem of Jesse, and a Branch shall grow out of his roots:

3 And shall make him of quick understanding in the fear of the Lord: and he shall not judge after the sight of his eyes, neither reprove after the hearing of his ears:

4 But with righteousness shall he judge the poor, and reprove with equity for the meek of the earth: and he shall smite the earth: with the rod of his mouth, and with the breath of his lips shall he slay the wicked.

6 The wolf also shall dwell with the lamb, and the leopard shall lie down with the kid; and the calf and the young lion and the fatling together; and a little child shall lead them.

7 And the cow and the bear shall feed; their young ones shall lie down together: and the lion shall eat straw like the ox.

8 And the sucking child shall play on the hole of the asp, and the weaned child shall put his hand on the cockatrice’ den.

9 They shall not hurt nor destroy in all my holy mountain: for the earth shall be full of the knowledge of the Lord, as the waters cover the sea.

10 And in that day there shall be a root of Jesse, which shall stand for an ensign of the people; to it shall the Gentiles seek: and his rest shall be glorious.

The first half of the ten verses seem to be directed to our head and heart. They speak to our tendency to be judgmental; are we the kangaroo court toward people in our path?

The next four verses are metaphors for harmony and a new world order, where things go against their nature to find peace and joy. What a hopeful set of verses these are! Coming from the depths of the Old Testament, the words of Isaiah are a tribute to the solemnity of the divine, the lion and the lamb. The world of this God has enough capacity to care for all of us and then some, with more love to spare.

So who is this character, Jesse, anyway? And why is he mentioned? 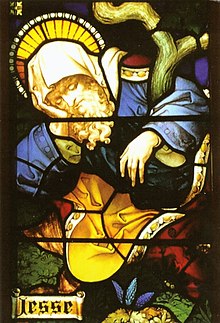 According to the Old Testament, Books of Ruth, Samuel, and Isaiah, the character Jesse was the son of Obed and the grandson of Ruth and Boaz. He was a prominent citizen in the town of Bethlehem. He was a member of the Tribe of Judah. Jesse worked as a farmer, breeder of animals and sheep herder.  In some Jewish traditions, Jesse is named as one of four ancient Israelites who died “without sin.” The other three were Benjamin, Chileab and Amram.

Jesse is said to have raised eight sons, including David, the youngest. One day the prophet Samuel came to Bethlehem on a mission from God to anoint the next king of Israel. Under the guise of offering a sacrifice to God, Samuel used the excuse for his trip because he was afraid that King Saul might kill him if he knew the real reason for his trip. Samuel offered a sacrifice with Jesse and then went to his house, where he sanctified him and his family.

Samuel asked Jesse to present his sons. With each presentation, although Samuel was impressed with the sons, God spoke to him and directed that he reject the son as king. After seven such rejection, Samuel asked if Jesse had any other sons.  Jesse told him that David, the youngest son, was tending the flock. The prophet then asked for him, waited, and when David came, God asked that Samuel anoint him as the next King of Israel.

Years later David fled to the desert away from Saul, who sought to kill David in order to stay in power and not allow his throne be taken away. David, worried about the safety of his parents, went to Mizpah in Moab, and asked permission from the King to allow his father, Jesse, and his mother to stay under the King’s royal protection. The King agreed and they stayed there until David’s fortunes took a turn for the better. The Gospel of Matthew starts Chapter 1 with a litany of the 42 generations from Abraham to David, from David to the exile in Babylon, and from the exile to the birth of the Messiah. Jesse’s heirs, through the House of David, were ancestors of Jesus of Nazareth, who was born 14 generations later in Bethlehem.

There are so many Judeo-Christian ties to this story, because there are so many parts of the New Testament which have roots in the Old Testament. Websites with those biblical references are everywhere. [7]

The Gospel of Luke offers a similar litany of ancestors, mentioning Jesse (Luke 3:32) among the males who helped sustain the line from Abraham.

Finally, in Revelations (Rev 5:1-5), John ties the lineage together with a dream-like prophesy of his own: “Then I saw in the right hand of him who was seated on the throne a scroll written within and on the back, sealed with seven seals. And I saw a mighty angel proclaiming with a loud voice, ‘Who is worthy to open the scroll and break its seals?’ And no one in heaven or on earth or under the earth was able to open the scroll or to look into it, and I began to weep loudly because no one was found worthy to open the scroll or to look into it. And one of the elders said to me, ‘Weep no more; behold, the Lion of the tribe of Judah, the Root of David, has conquered, so that he can open the scroll and its seven seals.’”

Through Jesse, the shepherd, to Jesus, the Good Shepherd, we have connection to the pastoral care for his flock. And through Revelations we have the opening of the Seal, giving credence to the conquering of death to rebirth. The Lion and the Lamb (fatling) are together again in harmony and peace. A young child is leading them side by side.