The Hemis Kachina is probably the best known and most beautiful of all Hopi Katsinas. In many collections the Hemis is also the tallest and the most colorful of the Kachinas. His elaborate headdress, called a tableta, is partly responsible for his height and beauty. His body is painted with black corn smut with light colored half moons on the chest. He wears a kilt, which has been elaborately embroidered.

The resplendent tableta, which can be half the size of the body, is painted with phallic and cloud symbols and capped with feathers. Evergreen sprigs appear above the neckline of the dancer. He appears in certain Hopi ceremonies, particularly the Home Dance or Niman Ceremony. No other kachinas, neither clowns nor side dancers, appear with the line of the Hemis Kachinas, except the Hemis Manas. The Manas are often the town elders who create the beat of the dance with rasping sticks, drums, and gourds. They make frog-like sounds that are intended to resemble thunder in the distance. 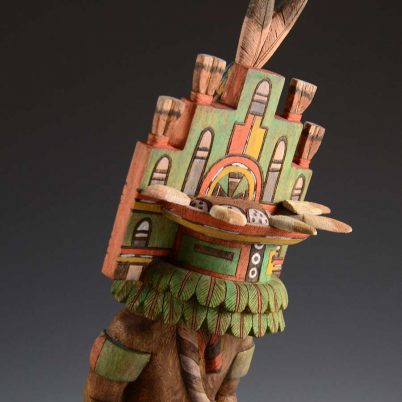 The dancing Hemis Kachina has rattles, shells, bells, and/or jewelry in his hands and on his legs. They are a constant source of rhythm and cadence for the participants and audience. Some versions of the Hemis Kachina dolls are topped with wood carved feathers, while others have real eagle and owl down feathers on the tableta.

There are some US Federal Regulations around the selling of these Hemis Kachinas, according to the Native American Antiquities Act and in those instances the back and top of the mask are removed before they are sold to collectors outside of the Hopi tribe.