Skiing, birds, sightseeing, and munchies are the topics of this avian Witness Post.

There are lots of multi-syllabic words with descriptors from the animal kingdom. One such word is Onomatopoeia, which roughly translates as “words that sound like the sounds they represent.” Examples of onomatopoeia include roar, clunker, zoom, snore, and purr. Lots of other examples come from bird names. One of my favorites is the Black-Capped Chickadee with its memorable vocalizations! This small, cheerful little acrobat makes lots of sounds: the most distinctive being its name – “chick-adee-dee-dee.”

In legend and literature, the Chickadee is associated with the thinking process, higher mind and higher perceptions.(1)  It is also associated with mystery and the feminine. Many Native Americans pray to the Chickadee to help to uncover the mysteries of the mind.  With a Chickadee totem, people can perceive more clearly in the dark and understand higher truths. Chickadees are a social bird, usually traveling in groups. They love being with people and are usually cheerful and fearless around other animals.

Different parts of the North America have become the habitat for several species of Chickadee: Boreal, Chestnut-Backed, Mountain, Black-Capped and Carolina. Among these species, the one I find most interesting is the Mountain Chickadee, whose clearest vocalization is the three syllable word “Cheese-Burger!”

We were taking a break from skiing at the ski resort called Solitude in Utah, outside of Park City, this winter. While munching on cheeseburgers at a picnic table on the deck outside of the chalet eatery, we relaxed and scouted for Betty’s. The menu was limited but had the necessary carbs to tide us over until supper. Facing away from the crowd, I was at a disadvantage to the boys, as they got the first and best fill of the talent on the patio. A bird landed on the dormant Aspen off the deck and started calling: “cheeseburger, cheeseburger.” Another bird hiding in the branches of a nearby spruce echoed back: “cheeseburger, cheeseburger,” followed by a song that sounds like a 3 or 4-note descending whistle: “fee-bee-bay … fee-bee-fee-bee.”  These birds knew the menu perfectly and I could picture John Belushi behind the grill barking out the food orders: 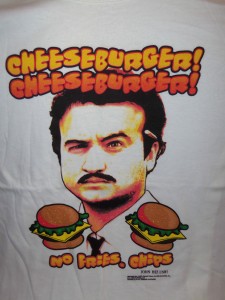 Two snow bunnies were out of Solitude and strutting their stuff that day, as the duo wearing pink leotards and black spandex shredded the groomers below the lift. They were too fast for me so I stayed to the Blue and Single Black Diamond runs, being careful to follow the verbal instructions from Ned and Laurie. No last minute Double Blacks or downhill racing needed to affirm my manhood. 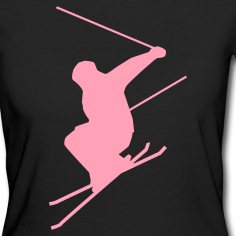 Instead?  Off to Birdland for a reverie:

The Mountain Chickadee (Poecile gambeli) is a small songbird.  Called a passerine bird, it is in the tit family -Paridae. Often, it is still placed in the genus Parus with most other tits. (Laurie, I know what you are thinking.  This does not refer to breasts.) The American Ornithologists’ Union has been treating Poecile as a distinct genus for some time. (2)

Mountain Chickadees are known colloquially as Cheeseburger Birds.  We know why.

Adults of both sexes have a black cap joining a black postocular stripe behind distinctive white eyebrows. Their backs and flanks are gray and they have paler gray underparts; they have a short black bill, and a black bib. The typical adult wingspan is 7.5 inches (19 cm), and the overall length is 5-6 inches (14 cm). (3)

Common inhabitants of the mountainous regions of the western United States, their range extends from the southern Yukon to California and Rocky Mountain States in the United States. A few Mountain Chickadees may migrate locally up the mountains in the summer and down into the mountain foothills in the winter; but this phenomenon is not well documented. In the Santa Fe Valley of the southern Rocky Mountains, in New Mexico, they can be found about 300 feet above town, at 7,300 feet, as well at the base of the tallest mountains, Tesuque and Baldy at 10,400 feet; that mountain base is located 25 minutes up the one mountain road from the valley.
They breed monogamously, producing 1 to 2 broods per year. Incubation by the female is 14 days. The young are altricial, and stay in the nest for 21 days while being fed by both parents. (4)

Their primary diet is insects during the summer and breeding season; conifer seeds and other plant seeds are taken throughout the year. They cling to the undersides of branches and to tree trunks, searching for food in the bark or breaking seeds open by hammering them with their beaks.

One thought on “Birds: Mountain Chickadee”