Up at 4:45 am and headed out by 5:15, it was a rush to US 70 west from Denver toward the Rockies. Today we were going to climb another of the 14,000 footers among the Colorado list of 53 peaks. Our goal was scaling LaPlata Peak in the Sawatch Range. At 14,343 feet, it is the fifth tallest mountain in the state. Little did we know the challenges of the day ahead. We were so hopeful as the sun rose at our backs and the pastel colors of morning rose on the horizon.

Sunrise through our car back window and the lights of cars on US 70.

We hydrated on our drive with bell jars brimming with lemon water and thermoses full of coffee before we landed in the mountain town of Dillon, shopping for a sack lunch and getting a pit stop.

The conversation on our drive was about songs and relationships and family. Mostly family, as we were coming to the end of a week-plus fest in Colorado. Starting in Boulder, we had some fabulous hikes in the Flatirons, scaling Royal Arch, the 1-2-3 Flatirons Trails and nearly conquering the Mesa Trail, end-to-end. The enjoyment of our videos and pictures shifted the conversation to photography and getting a combo SLR/Video camera. Interesting thought, when I feel flush with cash.

Feeling that I was slowly “getting used to the altitude,” I held some inappropriate confidence of my preparation and readiness to climb one of the tallest mountains in the state.

Passing through Leadville, one of the first prospector towns in the Colorado gold rush, the 10,151 feet of altitude was palpable. Coming from sea-level, getting the appropriate proportion of oxygen in ones blood is no joke. The town is a funky place with a theatre, bars, saloons, banks, retail stores and restaurants. We decided that we would try to stop in the town on the drive back to Denver.

The girls were feeling pretty perky as we skirted the headwaters of the Arkansas River without pausing for any tribute. We knew we were in granite country as we spotted the quartz, feldspar and mica in copious boulders all around us. 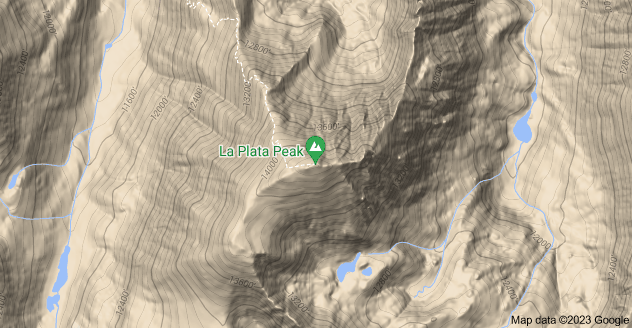 Mistaking peaks, one for another, is rare, if you have a map and a good compass. Plus with all of the 14’ers well-marked and usually visible above treeline, getting lost is a sign of ignorance and bad luck. However, when the trees on the road are 50 feet tall and the morning shadows are long, it is trickier to see the peaks than we had imagined. Usually the trailheads are easy to spot and lots for parking are convenient. In the case of LaPlata, the parking was easy to see, but the right trailhead was invisible.

Parking in one of the last available spots on the south side of the road, we headed on a public/private dirt road into the wilderness. After about 4 miles, Kathleen felt that we should have found the trailhead by now. Cell reception was spotty, but she was able to get enough signal to point out that we were miles past the turnoff point and ascent trail to our destination. Backtracking those miles, we found a trail spur off the side of the road. Unmarked and unremarkable, we realized that this was indeed the start of the La Plata Peak trail. 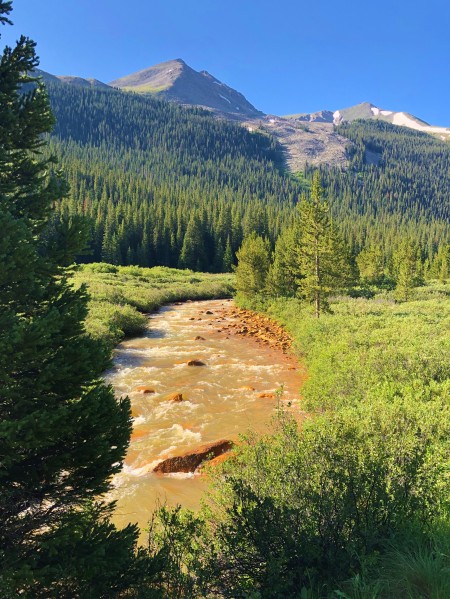 Losing our way on the public/private road, before headed back to the parking area

Two hours later than we wanted to be, we were finally back on the real trail and headed up the side canyon to La Plata. The copper colored water was cold and eerie, as if it were a mudslide or over-mined slurry run. We did not taste the water, fearing some contamination. The wild flowers were beautiful and in full flower, which was a visual treat for all of us. We passed through some valleys where trees had been mowed down like grass. After inspection it became clear that the ravine had been a winter avalanche area. Quite a devastating treefall, especially to the aspen in the valley.

We headed up the gorge and along the trail, being careful to notice the changes in the topography as we went from one side of the mountain to the other. After a long walk at an even pace and flat terrain, suddenly the trail got much steeper. There were steps built into the landscape, holding back the sliding rocks and securing the trail. We headed up and up, following the course that was next to a clear rushing stream. 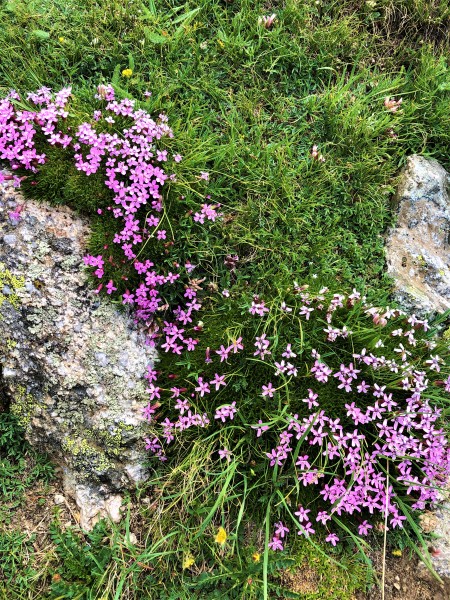 The pace of the climb varied, depending on how we were feeling. Kathleen took the lead, followed by Eleanor. I was the caboose. All along the way the girls shouted down to me words of encouragement: “You are doing so well, Dad, way to go!” That said, as we climbed higher and higher, breathing got harder. After many years at sea level, I will admit that oxygen is greatly underestimated. If breathing is hard, take it as a sign to slow down. And make no mistake, the oxygen is thinner above 13,000 feet.

We had two day packs among the three of us, and before the most steep trails up the slopes (balancing acts on talus slopes of teetering rocks, separated in cairns) I handed my day pack to Kathleen to carry. Several things happened simultaneously: 1) my pulse increased to about 120 bps; 2) my breathing sped up; 3) my stomach started feeling convulsive; and 4) I felt very dizzy.

It did not take a medical professional to see that these were the signs of distress. I was experiencing the classic symptoms of altitude sickness. Sometimes called “mountain sickness,” the only symptoms I was missing were loss of appetite and vomiting. What I seemed to be missing the most was proper breathing. 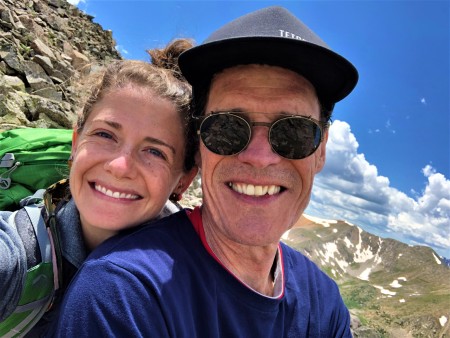 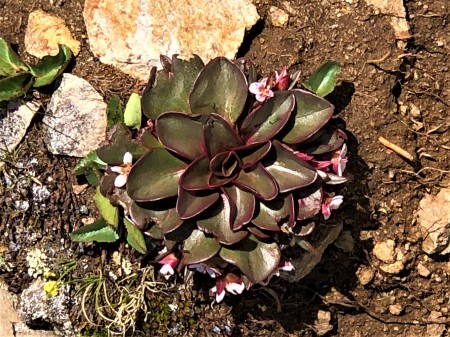 We stopped at this point to take stock of the situation. We had just crested above 14,000 feet (as least according to my iPhone altimeter) and it was getting toward 2:30pm, the time we wanted to be heading down. I was still feeling dizzy and unsteady on my feel after short bursts of energy.

Assessing the situation, the girls heard me mention dizziness one more time. We stopped to talk about our situation and check the weather conditions. We were above 14,000; peaking is a goal, but not a MUST have; our health is the most important factor; the day is already beautiful; we will be late getting home and Tracy will be upset at not knowing our situation; there are suspicious clouds ahead and mountains have their own weather; others are ahead of us, let’s check in with them as they are on the way down.

We had a beautiful perch out of the wind and with a magnificent view to the north and east of the the peak. Instantaneously Kathleen and Eleanor started to sing Nederland, a song they sang every time they peaked a mountain while at Cheley Colorado Camps in Estes Park. They cried with joy after the song and we had a chance to stop and take stock of our gratitude in being here, climbing peaks and experiencing the wildness of life. It was beautiful and rewarding to take stock of our blessings.

It also gave me chance to catch my breath. Eleanor re-emphasized the importance of water (small sips, not big gulps) and breathing (from the belly and not short breaths from the chest). I realized that my breathing and hydration were ineffective and added to my levels of vertigo and nausea.

Eleanor led us through a breathing exercise, which was a powerful reminder of the source of our breath and the exchange of oxygen in our system. Low, swift, shallow breaths add no oxygen to our blood; long-extended breaths make all the difference.

The next descending party we passed was a trio with a 16 year-old, wearing Vans, and an older set of parents. They said that peaking was totally worth it. When we ascended, they told us to take the curved trail following the cairns to the right. The summit was about 20 minutes up and to the south from our position. Also they added that the clouds were quickly disbursing and there was no imminent sign of rain.

With those words of encouragement we decided to keep gong. We took it at a slow and steady pace, breathing and hydrating appropriately. After about 20 minutes we hit the peak and reveled. Eleanor took us through a set of meditation, after which we ate lunch and explored the peak. 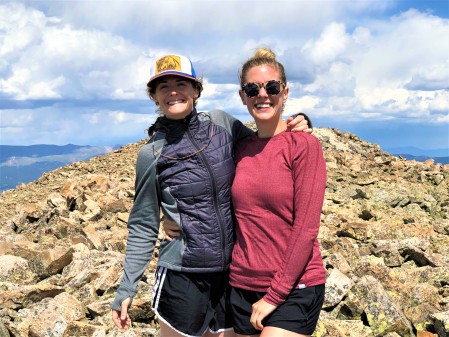 On the gratitude scale: I thank God for my health. Reading our bodies is so important. The fact that a 65 year old is not so attached to “the urge to summit” that he was willing to compromise everything. Good choice. We talked about the situation and made the right decision. In this instance it included scaling LaPlata. Yet, we were not so attached to summitting that we couldn’t compromise in any other situation. I was proud of our process and am glad we all spoke about what we wanted and were feeling. 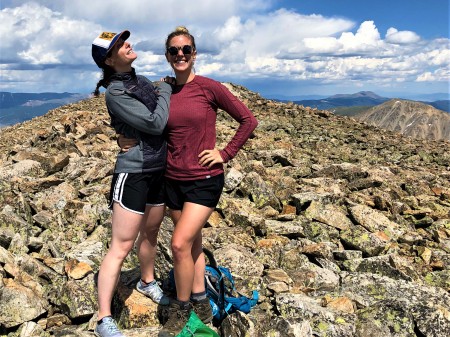 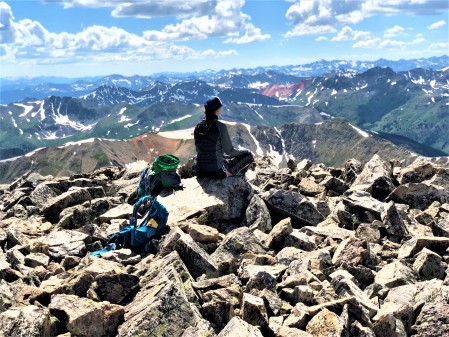 After some time enjoying the summit, and meditating, and eating lunch (even though it as 3pm) we headed back down the mountain at a slow pace. Going back down was so steep! Our shoes and boots slipped on lots of small pebbles on the trail. It was so tricky. I tried to take a short-cut across a snow field and fell through the snow, hitting the white stuff all the way to my crotch. Yikes!

Heading up and down the mountain, we saw lots of marmots and pikas. The marmots were all sizes, with some the size of a small dog. The pikas, in the rabbit family, are the size of a large bunny. The sounds that they made accompanied us all the way up and down the rocky areas above timberline. Kathleen counted over 50 marmots on the descent, which was fun, as they came out in full families as the sun started to set. By 5:30, it was a full chorus of animals who reign in the rocks!

We knew that no one, except us hikers, knew that we were OK and headed down, so I tried to get down quickly and to get in cellular coverage area to get contact with Tracy. I feared that Tracy would be panicked at our late arrival. She would be worried that something of a catastrophic nature had befallen us. We prayed that Tracy would not panic and we could get down securely and safely without a hitch. 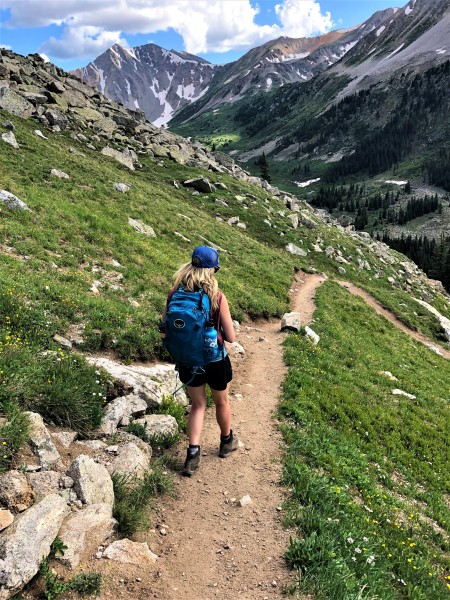 We stopped, ever so briefly for the girls and me to get ourselves cooled off in the adjacent stream. Eleanor went for the full body experience, immersing herself from head-to-toe in the frigid water. I just washed my feel and shook out my socks with the pebbles and sand I had collected in my shoes. I took off before they finished with washing and wanted to get into cell service areas soon.

Dinner in Leadville? Yup, that is exactly what we did. Dining across from Tabor Opera House, we had a burger and salad that hit the spot. Downing the meal with a Sprite, we headed back to Denver and the comforts of Perry Street. This was a trip that emphasized the importance of communication, caution and goals. The hike was a 10! Heading back to Denver the sun set slowly and powerfully over the Rockies. The changing light and dark on the western horizon made for a spectacular end to a great day.

I am ever so grateful that I have daughters who will put up with me, encourage me, challenge me, and give me the grace to catch my breath. May we have many more such experiences ahead.

Next time it would be great to have Margaret and Tracy with us.