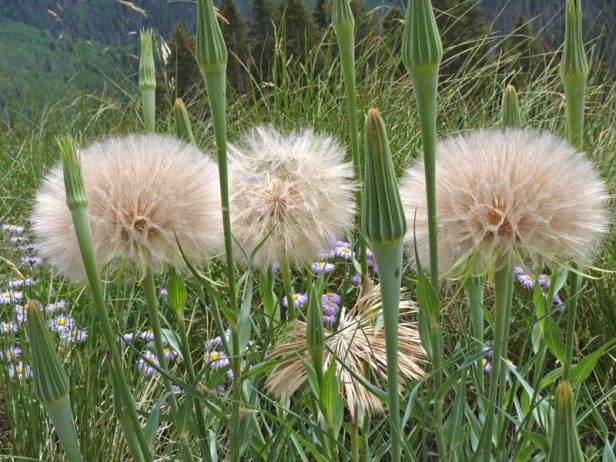 There is a profusion of dandelion-like seed globes in the fields and meadows of the high country in Colorado these days. The increased numbers seem to have accompanied the heavy dose of rain that has arrived nearly daily on the Front Range. The flower, in the Sunflower family, is known by several names, including Western Goat’s Beard, Salsify, Wild Oysterplant, Johnnie-Go-To-Bed-At-Noon, and Tragopogon dubius.

The plant opens its flowerhead in the morning and closes up before the heat of the day, hence some of its nicknames. We spotted lots of them flowering and going to seed on the Flagstaff Trail outside of Boulder this summer (2019) and the blooms ranged in color from yellow to pink and  the globes from white to brown to gray, as they were going to seed. The seeds seem hardier than dandelions, as they were not immediately crushed by the pelting rain and hail. The globes seem to last for weeks, before the perfect wind arrives to send the seeds aloft.

According to various sources, the Salsify is not native to North America. It was introduced to our continent from Central Europe and Western Asia. In the fall and spring the plant is harvested like a carrot and used in salads and dishes. Salsify is known for its subtle, distinct flavor, that can be easily overwhelmed in soups and stews, so it is often served with lemon water alone with some butter and olive oil. 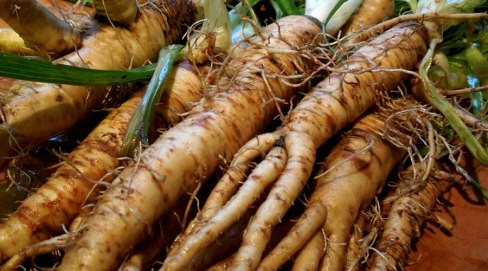 Salsify sounds like the name of a Spanish dance exercise to loosen up your hips. Add some chips and dip, and you are good to go.

Over the decades it has been used for many medicinal remedies. Natural remedy practitioners have ground the roots of the plant into an externally used poultice to recover from bee stings. The carrot-like roots are eaten as a remedy to many ailments, including stomach pain, diarrhea, excess urination, gonorrhea and internal bleeding. The juice is also used externally as a wash for rheumatic joints.

The purple version of the Salsify is all over northern Spain, which is along the paths of the Camino de Santiago. Whatever the color, it is a fun flower to know and enjoy…We may have to eat it sometime.