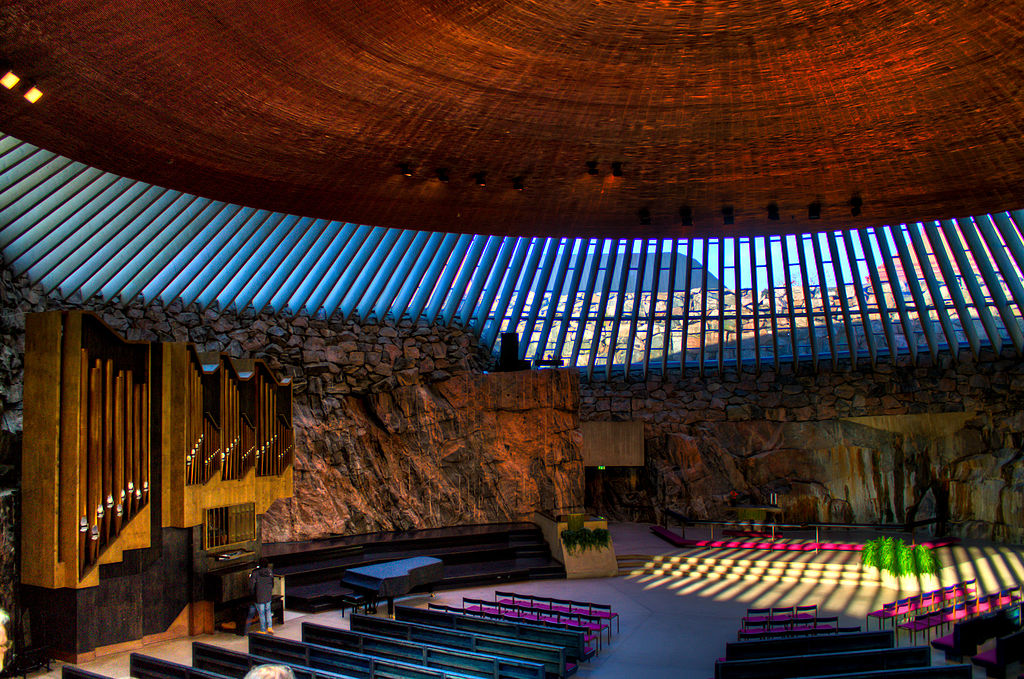 The Temppeliaukio Church, or Rock Church, as it is often translated, is a Lutheran Church in the Töölö neighborhood of Helsinki. The population of Töölö was expanding in the late 1950’s, as was this edge of the city, and the community felt there should be a church in the area. Built into the bedrock of this quiet neighborhood, the church has become one of the capitol’s favorite tourist attractions and an important architectural-based destination in the city. As the visitors’ brochure says, “Its impressive atmosphere, splendid architecture and excellent acoustics have made the church popular not only with tourists but also with local inhabitants and concert arrangers.” [1]

The church was built in 1961, after an architectural competition for proposals to embody a “community Church of the Rock” which would emerge out of the stone. The competition was won by the Suomalainen brothers, Timo and Tuomo, who proposed a radical design that aroused great public excitement.

The Suomalainen’s design called for the church to be carved directly out of the bedrock, and to be accessible from street level. The church is elliptically shaped and the main hall is bathed in light during the day as the sun passes through the skylights between the rock wall and the copper ceiling dome.

The inner surface of the dome is clad in copper tape, requiring a length of 22 km, or about 13.7 miles of copper shielding. The diameter of the dome is 24 meters, and at the highest point it is 13 meters above the floor. The excavated surface of the walls was left rough, with drill trace marks visible, for acoustic and aesthetic purposes.

Water trickling from the cracking rock, which is led away from the building via channels that are under the floor, adds vibrancy to the stone surfaces. The drilling trace marks also display the working methods of the wall excavation. The height of the walls varies from 5 to 9 meters.

The altar wall of the sanctuary is split in the rock dating back to the Ice Age. The altar itself is a granite table that was sawn from the bedrock and polished. The floor of the hall is polished concrete, and the pulpit is made of reinforced concrete. The pews are made of birch wood and covered in royal purple fabric. All of the religious appointments were carefully designed and rendered by local and national artists: the altar crucifix, baptismal font and candelabra have been forged by artist Kauko Moisio; the church hall textiles have been designed by textile artist Tellervo Strömmer; and the green plantings in the rock surrounding the church have been designed by garden artist, Erik Sommerschield.

The stone wall encircling the church has been set and assembled with excavated rock. There are no bells in the Temppeliaukio Church. In the place, a chime melody composed by Taneli Kuusisto is played, which can be heard from loudspeakers placed in the outer walls of the church.

I checked with the woman who was taking tickets for the church viewing. Her bleached hair, pink eyebrows, wan complexion and vacant look left the impression that she would rather be somewhere else. She said that the denomination of the congregation was Lutheran, but that many other denominations also celebrated in this sacred space. “It is after all, first and foremost a church. They have a cross and everything,” as subtle as it is. 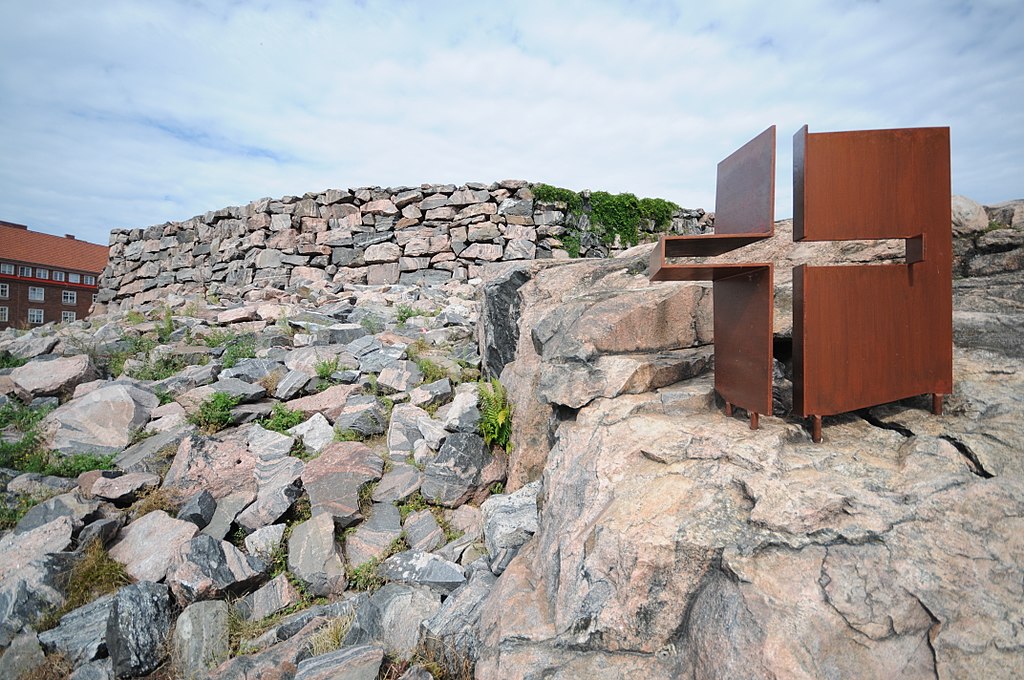 I probed the religious fervor concept deeper and asked one of the locals about the Lutherans in Finland. He said, “Well we don’t go to church much, but we are all members of the congregation, and we contribute to our local church through our tithe. We want to make sure that our families can have access to a baptism, wedding or funeral or other ceremony in the church, should the occasion arise in our lives.” Another woman said, “It helps if you want to run for a committee or to serve in public office to be a member of the church.” So much for heartfelt zealots. The fervor may be understated, as many emotions are for the Finns.

[1] The story of the Temppeliaukio Church is featured on a poster, translated into several languages, including English and hung in the entrance way to the church. Most of the historical elements as well as the measurements and artists for this Witness Post are cited from that document.