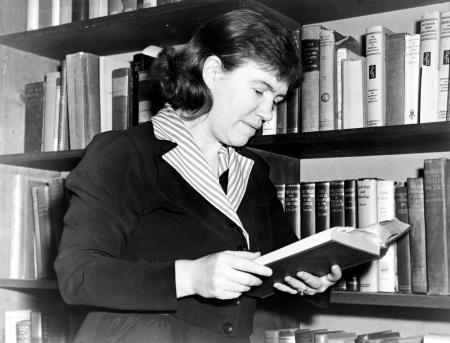 1) What is the Seven-Minute Itch?

There is an annoying plant that grows about thigh high in thick patches near Roland Run, a stream that meanders through our property in Maryland, where I lived as a child. If a passer-by brushed up against the stems of the plant with bare legs exposed, the fierce nettles would sting like a bee. The red marks would continue to sting for a bit until the toxins muted. Scratching the spot like the dickens did not dull the pain as it lasted for many minutes. We called the nasty nettle the seven-minute-itch. It hurt but went away.

Watch where you scratch

Looking at the wedding picture above, it appears that some men have a serious case of seven-minute itch, even as they start walking down the aisle! (If you don’t believe me, take a look at the man’s right hand.) Hard to understand, but it seems to be true in some households. 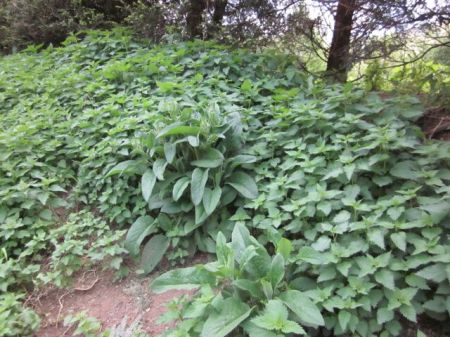 2) What is Margaret Mead’s Seven-Year Itch?

Fast forward a score of years beyond the back yard … we were listening to a guest lecture by Dr. Margaret Mead. She was addressing a large crowd in Battel Chapel at Yale University. Dr. Mead, the world famous anthropologist, was in her late 60’s as she opined about her own life. She made sweeping observations about humanity and human cultures she had observed around the globe. She made a profound statement with words to the effect of the following: “A marriage should be treated like a social contract; and it should be renewed by the couple every five to seven years.”

Really? Did she just say that? I was struck by the break with US social convention at the time. My parents had been married for over 25 years and, although we knew a lot of couples who had split-up, still more husbands and wives seemed outwardly happy with their choice of partners than unhappy. They had held fast to their marriage covenant, or so we believed.

Mead was saying that society should consider a more legalistic approach to love, fidelity and matrimony. In many faith traditions, monogamy is the preferred rule for marriage. Her thesis was that marriage is a “terminable institution.”[1] Are love and marriage, like that nasty nettle, a relationship itch that festers after 7 years, only to disappear? If it itches up to and during that seventh year, is that a sign to make a legal change? What a radical thought at the time!

I have reflected from time to time on my role as a husband and father and I have often thought about the comments on marriage by Dr. Mead. My wife and I are now in our third decade of marriage together: perhaps Mead had her version, and my wife and I have ours. I do not remember year seven of our marriage or year fourteen or twenty-one for that matter, as milestones that stood out for difficulty or a “wandering eye.” No seven year itch in our home. We have had some very rough patches over the years, relating to finances, careers, health and children mostly. Who doesn’t? Relationships take a lot of care and feeding. They take work. We feel very blessed that have not fallen into and out-of love over the years. Our desire for and belief in fidelity has strengthened, and on that point we are in unison.

In any case, Margaret Mead’s own life/mate pattern takes a different approach to marriage than ours. We must seem to be the unconventional, old-fashion ones these days, particularly in light of the devolution of marriage, monogamy and fidelity. 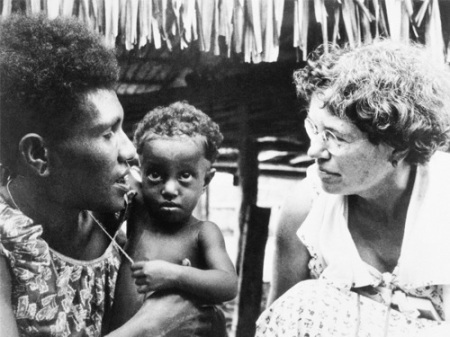 4) Tell us about Marriage & Divorce

Mead hypothesized that everyone should marry three times: once to leave home, once to have children, and once for companionship. That seems more like the practical advice of a couch-side marriage counselor than an anthropologist. Though not in exactly the same order, Mead seems to have followed her own counsel. She married and divorced three times. She first wed Luther Cressman in 1923. They divorced in 1928. Then in 1930 Mead married Reo Fortune, and that union ended in divorce in 1935. The next year, Mead married her third husband, anthropologist Gregory Bateson with whom she fell in love during their intense field research. The couple sometimes collaborated in anthropological research after that and they had a daughter together, Mary Catherine Bateson. The couple divorced in 1950 after 14 years together. Three marriages in 24 years, showing the Eight-Year Itch (on average), perhaps.

Mead and Bateson writing their observations

Yet there seemed some deeper human needs and desires for companionship which escaped her in the end. She died in 1978, a revered social scientist and solitary divorcee.

Margaret Mead’s daughter and sole heir, Mary Catherine Bateson, is entitled to her privacy, so there is no conjecture made here on how she turned out. Mead’s public conversation of “second and third marriage” though, does conveniently sidestep questions of parenthood, child rearing, and social responsibilities to the tribe. The “complication of children” expands the conversation beyond the topic of marriage and delves into the responsibilities of parents to their nuclear family. It also raises lots of important questions:

Dr. Mead worked with some of the poorest and most deprived children in the world in her research, yet she found the island cultures to be stable and supportive. They seemed to have a peace and happiness in families that has put the microscope back on “civilized societies.” What was missing in our culture? Perhaps the real problems lie not in Samoa or New Guinea, but in the US. We have more children in poverty and more single parents in the US than in any industrialized country on earth. 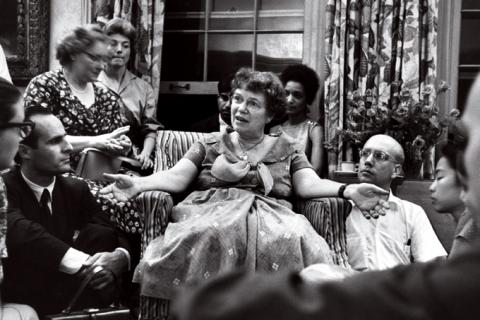 Marco Rubio, the Republican Senator from Florida, talking on the social factors that play into equal opportunities for all Americans, especially the poor, is quoted as saying: “The greatest tool to lift people, to lift children and families from poverty, is one that decreases the probability of child poverty by 82 percent. But it isn’t a government program. It’s called marriage.” Rubio is right that government is not the solution, though it can be part of the solution.[2]

As author and Brookings Institute scholar, Isabel Sawhill, stated, “Younger people must begin to take greater responsibility for their choices. The old social norm was, ‘Don’t have a child outside of marriage.’ The new norm needs to be, ‘Don’t have a child until you and your partner are ready to be parents.’ Whether or not it was a realistic norm in the past, it is now — precisely because newer forms of contraception make planning a family so much easier.”[3]

Mead at the Head of the Table

Margaret Mead never set out to be a paragon of family values or the epitome of lifelong marriage. Instead she was a scientist. She was also a powerful voice of truth and justice for women, then and now. In 1976 she said with deep sarcasm: “We women are doing pretty well. We’re almost back to where we were in the 1920’s.”

As the father of three young adult women, it is Margaret Mead’s willingness to put men in their place and women in theirs that I admire the most. She studied all over the world and sought to discover some universal truths. Dr. Mead helped humanize the view that anthropologists seem to have held during the era of Lewis H. Morgan. Morgan felt that primitive peoples were from lower castes of humanity. According to his theories of evolution, cultures around the world pass through seven stages of human progress: lower savagery, middle savagery, upper savagery, lower barbarism, middle barbarism, and upper barbarism, before they reach the nirvana of civilization. The “natives” in all cultures, Morgan theorized, were in a stage of development through which mankind must have passed in their long, slow, centuries of evolution toward the promised land of civil society. His proposed path to civilization had marital constructs and other conventions as well: the societies progressed through polygamy to monogamy, hunter and gatherer to agriculture, public land to private real estate, and expanded tribes to nuclear families. And even then the natives were not equal to the superior European white cultures, and women in all societies were socially lower than and subservient to men…

Dr. Mead saw things differently than Lewis Morgan. She had an appreciation for all of the cultural nuances of the people with whom she lived and worked. Mead understood the natives of New Guinea and Samoa as no man could have understood. She saw beyond color and race and gender. She was able to view them in their humanity and their grace, their song and their dance. She had a woman’s touch,  when the world needed it most.

Perhaps Margaret Mead’s most famous quotation is: “Never doubt that a small group of thoughtful, committed citizens can change the world. Indeed, it is the only thing that ever has.” She could have changed the actors in the quotation from ‘citizens’ to ‘women’ and it would have been more her style.

We may disagree on the Seven-Year Itch, but we agree on the fundamentals of human anthropology. Margaret Mead’s writings and beliefs are worth studying again these many years later. She is a powerful voice for equality and she has some important lessons that we can relearn in our polarized societies. And with the number of divorces and shrinking prevalence of monogamy, she may have been the ultimate precursor of the “Seven Year Itch Factor” after all.

On the Mead-O-Meter monogamy appears headed to extinction. Three marriages may soon be the US social norm and those with only one marriage will be anomalies left in the margins. For the sake of the children, I hope and pray that parenthood survives. Though it is difficult to predict. Marriage is going through a major transformation: only time will tell.

As for the equality of women? Females can sit and must sit at the head of any table, any time, no questions asked! Margaret Mead studied it, wrote about it, proved it and lived it. We are grateful for her leadership and steadfast example. 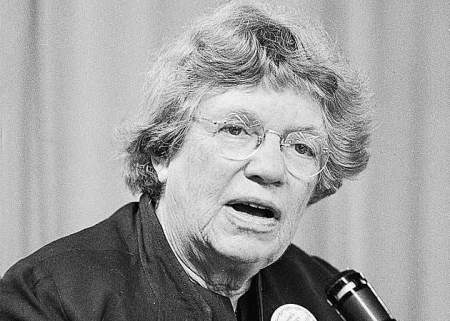 7) A Few of Margaret Mead’s Famous Quotations are below:

[3] Isabel V. Sawhill, quoted in the New York Times, 9/14/2014, is a senior fellow at the Brookings Institute and the author of “Generation Unbound: Drifting Into Sex and Parenthood Without Marriage.”

One thought on “Witness Post: Margaret Mead & the Seven-Year Itch”