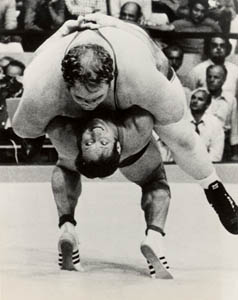 It is a sad time for wrestling, as we witness the demise of this Olympic sport, victim of dwindling attention and global sports politics.  The travesty has not stopped lots of former wrestlers and fans from complaining, and the din will keep happening until the injustice is reversed.  If it has the same luck as wrestling has in the NCAA’s it will not be long before the sport vanishes from the collegiate campuses and the world stage.  Another victim of apathy toward pugilistic sports. Before the cheering is completely gone, however, it is time to give tribute to the Heavyweights.  Lots of attention goes to the light and middle weights, it is their life’s ambition.  For heavyweights it is often a choice among various sports.  Who wouldn’t want a 6′ 5″ stud of an athlete on their crew, or football team, or shot put squad, or basketball team, or baseball team, or water polo team?  Men of that size are in great demand.

Part of the sadness of this turn of events is that some of the finest wrestlers in the world come from Eastern Europe and the Middle East.  Yes, there are always extraordinary Russian and German wrestlers, but from a part of the world like Iran or Bulgaria, in what other sport can a man train with the best and aspire to stand atop a podium as the finest in the land?  To rob their great athletes of the chance to compete on the world stage and earn recognition seems criminal.  Watching a ultra-heavyweight Iranian is amazing, because he has zero body fat, and moves like lightning.  They are among the supercats of the wrestling world.

My dad was a heavyweight wrestler, but a light heavyweight.  At 195# he was as about as light as you could get and still complete with the big boys.  He was a three time Southern Conference champ at the Unlimited weight class while at University of North Carolina, but due to World War II, he never competed at the Nationals.  He had a tour of duty taking him to the Mediterranean, before he could return to the States to finish college.  He skipped his college graduation ceremony to get married.  The rest is history.

Hooper as Junior at UNC

Dad continued to be an avid wrestling fan, long after his grappling days were over.  My brothers and I put a hurting on Dad when he was in his late 30’s.  After too many arm drags, and too painful Junior League demonstration moves, his shoulders couldn’t take a simple switch.  So it goes.

Dad has seen a lot of big men on the mat over the years, equal to and better than Navy’s Vic Henson.  And on some great trips to see the college wrestlers in action, he treated my brother, Ned, and me to some of the best.

As a high school wrestling coach, I worked with all weights and sizes; but at 185# it was my job to work out the big boys.  The heavyweights at McDonogh School in Maryland were all multi-sport athletes, combing wrestling with football, baseball, lacrosse or track and field.  In high school the emphasis has always been on NOT cutting too much weight.  For Heavyweights it’s about tone and muscle balance.  Fat is not part of the wrestling formula.  You want to be big AND fast, not big OR fast.  Our wrestlers were in excellent physical shape, and defied the stereo-typical Heavyweights from colleges around the country.

Christian Holljes, Randy Gresham, Mike McIntyre, Patrick O’Brien and Richard Bosley all wrestled for McDonogh and it was a pleasure to be with them in the wrestling room.  Holljes returned to school during his breaks from Duke, and he busted on me unmercifully with his new-found Blue Devil strength. The best wrestlers worked hard to get into the best possible physical shape, which is the price of admissions.  If you want to be good, you have to master the toughest territory, the gray matter between the ears. As brutal as wrestling appears, at all weight classes it is a mental game.

Our McDonogh heavyweights had the size, conditioning, confidence and the skill to win. O’Brien, Holljes and Bosley went on to be National Prep Champions at Heavyweight.  It was a tremendous source of pride to see these remarkable young men achieve success on the mat with this broader recognition.

College wrestling tournaments usually start with the light weights which are full of daring takedowns, dramatic near falls, and miraculous escapes.  The middle weights are known for their strength and power, as they slow things down a bit and show off their muscular physiques and brute-force abilities. By the time the matches have progressed to the heavyweights, the pace is slow like molasses and the tonnage makes for shoving, plodding boredom.  Dad called most of the obese unlimited wrestlers “glandular” cases, and sometimes he was right.  (Tab Thacker, from NC State, comes to mind.)

The big guys are too hard to move.  They stand like monoliths and move like sloths. Against a smaller wrestler, it does not seem a fair match.  Soon the crowd starts to yawn and ennui sets in.  The fun, along with Elvis, has left the arena. Why watch two enormous fat guys, neither of whom can take the other guy down (nor does either really try), and who can’t hold their opponent down from top?  The match soon dissolves into a 1 to 1 draw, headed for overtime.  The spectators stands up, stretch, take time-out for a bathroom break, or better yet, take a nap.  If there is a good heavyweight match, the interested spectators stand up and move … there is plenty of room closer to the mats.

Tab Thacker of North Carolina State on the left

Of course there are always some surprisingly quick and agile big men: Chris Taylor (Iowa State) and Curley Culp (Arizona State) come to mind.  Culp was a pinning machine in 1967, winning the Gorriaran Award for the most falls in the least aggregate time. Yes, Culp and Taylor were strong and hard to move, but they were also exceptionally good athletes.

Chris Taylor, at 6′ 5″ and 420 pounds, was an amazing man to watch.  He was twice the weight of some opponents, but had an arm drag and sweep single that defied his height and weight.  He won medals in high school, college, and the Olympics. Taylor was on the well-acclaimed 1972 US team with brothers John Peterson (Wisconsin – Stout) and Ben Peterson (Iowa State), as well as Rick Sanders (Portland State), Wayne Wells (Oklahoma State), Stan Dziedzic (Slippery Rock), Butch Keaser (Navy), Jay Robinson (Oklahoma State), and Dan Gable (Iowa State), of course.  While Mark Spitz was parting the Red Sea in the swimming pool, and Frank Shorter was defying the odds to win the Marathon, six US wrestlers came away with medals.  Many of the US Olympic members repeated on the 1976 team and Russ Hellickson (Wisconsin) added his own medal to the honor roles in Montreal. 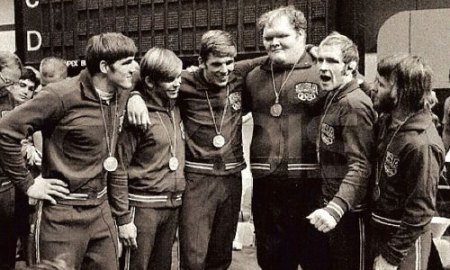 Standing next to Taylor at the NCAA’s one year, I was stunned by his size.  He had a grove of warts on his neck and back and his uniform was baggy and ill-fitting, as if Omar the tentmaker were employed to do the job.  Still, he moved with deliberate grace, even while walking.  As a spectator, I never saw him lose a match, but remember watching some re-runs of the time when he was pinned at the Olympics.  One of the most amazing videos is still available on YouTube of the suplay executed by Dietrich, his German opponent, in super-heavyweight division in the 1972 Olympics: https://www.youtube.com/watch?v=n79wBw_LJ9Y

There are also those extraordinarily strong and powerful wrestlers.  What they lack in finesse and slickness, they make up for with brute strength.  Brock Lesner come to mind.  He had the largest muscle groups around his arms, neck and chest that I ever saw.  He was a wrestler in his college days and a “wrassler” in the professional ranks, achieving massive crowd appeal from arenas around the country.  What a stud!

Bruce Baumgartner and Jeff Blatnick are some of those heavyweights who cover it all: the training, discipline, strategy, speed, strength, will-to-win.  They remain for me the quintessential big men in NCAA and Olympic wrestling.  There are better complete wrestlers out there, sure, but few Heavyweights who can match these men pound for pound and match for match.

Baumgartner on his way to Olympic Gold

Bruce Baumgartner (Indiana State University) remains one of the most decorated US Olympic wrestlers of all time.  He was a shot put and discus thrower in high school, in addition to wrestler, setting several Pennsylvania high school track & field records along the way.  In college he was a three time finalist at the NCAA’s, finishing atop the podium in his senior year.  His collegiate record was 134-12 with 73 wins by fall.  According to his stat sheets, post-college Bruce earned 4 Olympic Medals (2-Gold, 1-Silver, 1-Bronze), 9 World Championship Medals (3-Gold, 3-Silver, 3-Bronze) and 4 Pan-American Medals (3-Gold, 1-Silver,); he has also won 12 World Cup Medals (7-Gold, 5-Silver), an NCAA title (and 2 Runner-Up finishes), 4 Olympic Festival titles, 2 AAU National titles and a Junior National title.

Baumgartner ranked as one of the top super-heavyweight freestyle wrestlers for more than a decade. Winning his first World Championship medal, a bronze, in 1983; he won the World Championship in Los Angeles. He confirmed his status with the Communist Bloc (Eastern European) wrestlers by winning in 1986, clinching his first of his three world titles. In his second Olympic final in Seoul, he took silver, behind Georgian Davit Gobejishvili. Four years later, in 1992, he won the rematch in Barcelona, en route to a second Olympic gold. After winning world titles in 1993 and 1995, Baumgartner was favored to win his third gold in Atlanta, but a loss to Russian Andrey Shumilin left him with a bronze medal.

Baumgartner with his hardware

When Yale wrestled against Springfield in 1976, our heavyweight wrestler, Neal Brendel, weighed in at a mere 220.  Later in the season he lost 30 pounds to compete at 190.  Neal liked being heavier — he could eat whatever he wanted.  And when the weight loss regime took over, he took out his anger at me…every day.  For four years he beat the shit out of me six days a week and then he really got mad and on Saturdays he took out his meanness on Yale opponents.  Neal faced Jeff Blatnick when we drove into Springfield our senior year.  Only a freshman at the time, Blatnick lost a close one to Brendel.

Blatnick in uniform for Springfield, home of Basketball

Jeff Blatnick faired better against Brendel that I and went on to win the NCAA Division II championships twice.  He was a member of the 1980 US Olympic team, but lost the opportunity to compete, when the US boycotted the games.  In 1982 he was diagnosed with Hodgkin’s lymphoma, which prompted the removal of his appendix and spleen.  After radiation put the cancer in remission, Blatnick tried again and made the Olympic team in 1984.  He competed in Greco-Roman and won the Gold medal in Los Angeles that year.

Blatnick went on to become a devotee to wrestling, mixed martial arts, and ultimate fighting.  He was the perennial announcer of the NCAA’s Division I finals, along with Bob Costas.  I met Jeff again in the 1990’s and he remained an articulate and endorser of the sports he loved.  He died in 2012, from complicates from heart surgery.

With the comments about obesity and lack of exercise in the country, it is good to see that no matter what the size of the man (or woman), there is a place for them in sports.  Wrestling remains one of the few places where the biggest can compete and earn recognition.  While biased toward small, faster, lighter wrestlers, it is great to see the Heavyweights.  Every once in awhile, a Baumgartner, or Blatnick, or Lesner, or Culp will show up and amaze us.  Keep ’em coming.